SPIEGEL: European leaders will convene on Friday for a summit on a new European Union energy strategy. Is this yet another European meeting of big talk and little action, like previous announcements to become the most competitive region in the world?

Hedegaard: Well, I hope not. It should be used as an opportunity to tell the 500 million European citizens that we have to think about energy in a new way. It's not just about new power lines or power plants, it's more fundamentally about how we can save and how efficiently we can use energy. At the moment, we're wasting a lot of highly valuable energy because our machines and systems are far from being as efficient as can be. So the summit should focus European research and innovation capacities on this.

SPIEGEL: Three years ago, the EU set itself the target of increasing energy efficiency by 20 percent compared to 1990 levels. Are you satisfied with the contributions of the member states?

Hedegaard: Not at all. If we don't change gears, we will only reach a 10 percent improvement. That's why member states should be open to stricter and more ambitious EU regulation on the design and energy needs of electrical appliances. This is a great opportunity for European companies to put products on the market that are fit for the energy-constrained world of the future. We should see this as an investment for the future.

SPIEGEL: But in the current economic crisis, governments and citizens alike are shying away from any extra expenses.

Hedegaard: Last year, due to higher energy prices, Europeans paid a bill of $70 billion extra for importing energy from elsewhere than we did in 2009. At the moment, we just accept paying those extra billions as if we have no choice. But it's not so. We could use this money much better to improve science and education than by sending it abroad. Saving energy and increasing efficiency are great ways to strengthen us economically and strategically.

SPIEGEL: A lot of governments, including Germany's, oppose new regulations on energy efficiency.

Hedegaard: I think we should think more strategically in Europe. I hope the European governments will send a strong signal about improving our energy efficiency performance up to 2020. That would create a lot of jobs that can't be outsourced to China or elsewhere.

SPIEGEL: European energy supply is still heavily dependent on coal, the dirtiest fossil fuel. How quickly would you like to see that reliance disappear?

Hedegaard: For the foreseeable future, we can't fuel our economies without coal. So we have to tighten standards in order to make sure that when we build new power plants, we build them using the most efficient technologies available. Secondly, we need to explore technologies for disposing of CO2 underground instead of pumping it into the atmosphere.

SPIEGEL: But this so-called carbon capture and sequestration (CCS) technology is very controversial. Environmentalists oppose it heavily. Do you see a chance of making it work?

Hedegaard: We can't afford to say categorically that we do not want this technology. We need to explore it. CCS holds some promises to curb our CO2 emissions. But it's not a magic bullet because CCS uses a lot of energy itself. If you want to store the CO2 from three power plants below ground, you need the energy of a fourth power plant to do it. Also, CCS mustn't be used as an excuse to stick to coal longer than necessary.

SPIEGEL: Germany has just succeeded in pushing for longer coal subsidies until 2018. How frustrated are you about this?

Hedegaard: I would have preferred to end coal subsidies earlier. If we make too many decisions like that, we will not reach our target of creating a modern, green and innovative Europe. It is not really wise to spend tens of thousands of euros on each job in an industry that is not competitive at all. Is that how we want to innovate and renew Europe? Money is scarce these days. Wouldn't it be better to invest in the technologies of the future? Look at battery technology, where China and the US compete for key patents and technologies. We must lead this race for future technologies.

SPIEGEL: In Germany, there are fears that the EU is about to attack the German Renewable Energy Law through harmonization, the creation of standard Europe-wide regulations. Is that fear justified?

Hedegaard: I think, in the longterm, it is logical to have greater harmonization of renewable energy support schemes, in line with an increasingly harmonized European energy policy. However, right now we don't want to create uncertainty for companies and governments. National Renewable Energy Action Plans have been made up to 2020 based on the systems that we have today. Let's work with these, and only envisage change in the very longterm. Incentives that work should not be changed just for the sake of harmonization.

SPIEGEL: The EU has still not decided whether it should increase its target for CO2 reduction from -20 to -30 percent compared to 1990 levels. Did the United Nations summit in Cancun pave the way for this step?

Hedegaard: Specific increased targets were not part of the Cancun results. So the debate is still open. In general terms, I see a strong case for being more ambitious than we are today. But we put analysis first. The European Commission will put foward a low-carbon roadmap up to 2050 in early March, together with a white paper on transport and an energy efficiency action plan. That roadmap will show that it is cost-effective to be more ambitious, and that reducing CO2 emissions early can also save a lot of money in the longer term.

SPIEGEL: Would Germany have to increase its national CO2 target of -40 percent in order for a tougher EU target to be achieved?

Hedegaard: That is not for me to decide. But I found it interesting that the German environment minister has endorsed moving from -20 to -30 percent.

SPIEGEL: The showcase of European climate policy, the Emissions Trading System (ETS), has just been robbed by computer hackers. After creating a shadow currency with CO2 certificates, the EU was not able to protect it. Isn't that embarrassing?

Hedegaard: Of course, the trouble that we have had lately should not have happened. But it is not unusual that such a large new market, worth some €90 billion per year, would become a target. Any new financial product attracts abusers and criminals; but, of course, member states must fix their registry systems rapidly. The ETS system needs to be better protected.

Hedegaard: A unified European system with tough security measures. The EU ETS is a common system across the European Union, and it is only as strong as its weakest link. We need to work together to resolve these problems. When systems are new, it is often tempting to retain member states control, but that is not always the best solution.

SPIEGEL: Some countries don't want a European Central Bank for CO2 and instead want to get their hands on the billions of euros in revenues.

Hedegaard: Fair enough, but that should not stop us from creating a truly safe registry system.

SPIEGEL: Criticism of ETS runs much deeper. A lot of economists and business people complain that it is too complicated and ineffective.

Hedegaard: That's totally wrong. On a fundamental level, the ETS works very well. It decreases emissions gradually in a cost-effective way. That's not to say the system is already perfect; it still needs to mature. I'm convinced the critics will look back in 10 years time and see that this instrument was very helpful in making us less dependent on foreign energy sources.

Hedegaard: That's a very static way of looking at the situation. In its next Five-Year-Plan, China will itself start to price CO2 emissions. I would not be surprised if we would soon see a Chinese emissions trading system soon. They already have four promising pilot projects. Also, New Zealand, South Korea and California are about to implement emissions trading. And Australia is considering it, particularly after the droughts and floods they just went through. So the EU is far from being alone with this. Reducing CO2 emissions can increase our competitiveness, not the opposite, if we do it intelligently.

SPIEGEL: What is the ETS' biggest weakness?

Hedegaard: We are worried that the price signal is not strong enough to make companies really change their behavior. Companies have banked a lot of certificates during the economic crisis, which depresses the price. So we need to discuss how to reach higher price levels that really create an incentive to invest in greener, more efficient production systems. One way would be to tighten the cap for CO2 emissions.

SPIEGEL: In the US, Republicans now want to block any further legislation on climate change. Was Cancun the maximum that can be reached?

Hedegaard: No, I think we still have a chance to move forward with the next conference in Durban, South Africa (from Nov. 28-Dec. 9). The Chinese Five-Year-Plan might inspire the US to act. If the West does not want to be outcompeted by China on energy technology, just relying on cheap oil is not a good strategy. 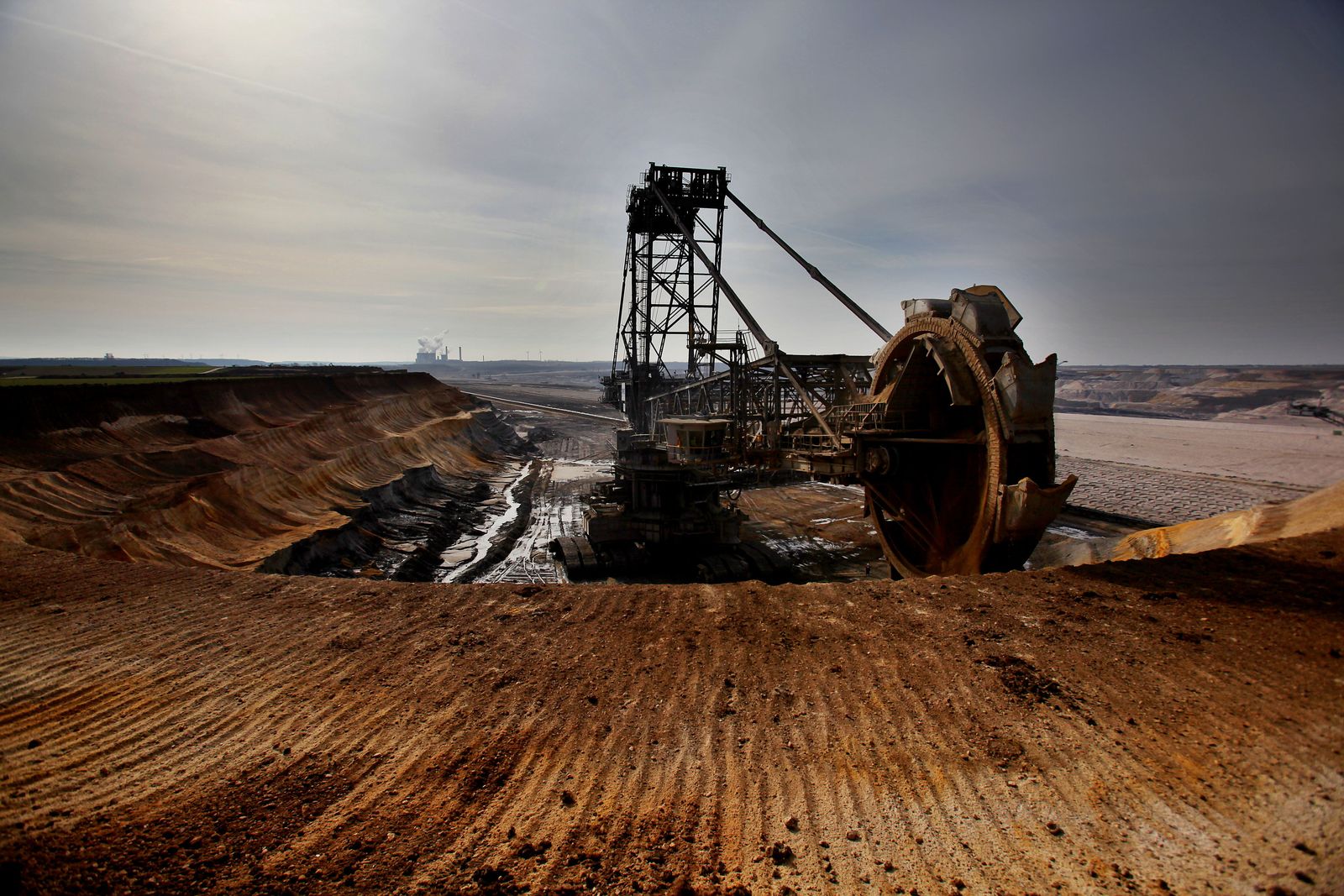 An open pit coal mine near Jülich, Germany, with a coal-fired power plant in the distance: "For the foreseeable future, we can't fuel our economies without coal."