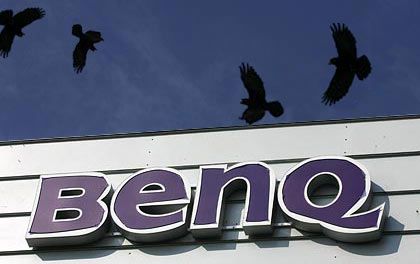 It was no secret that Siemens mobile phone division wasn't in great health when the company sold it to BenQ. Indeed, the division was haemorrhaging money to the tune of €1 million per day before heading east. Unfortunately, the Taipei-based company could do little to stop the bleeding. On Friday, BenQ Mobile GmbH -- the subsidiary formed as a result of the sale -- declared bankruptcy. The announcement means that up to 3,000 workers in Germany, inherited by BenQ as part of the original purchase agreement with Siemens, could stand to lose their jobs.

The result has been outrage in Germany, both among those whose jobs may be in jeopardy and among German politicians. The governor of the German state North-Rhine Westphalia, Jürgen Rüttgers, ultimately blames Siemens for the debacle and had sharp words for the German electronics giant on Friday. At a speech before assembled employees at a factory in the town of Kamp-Lintfort located not far from the western German city of Düsseldorf, Rüttgers said, "I have not forgotten that this factory once belonged to the Siemens Corporation. I am of the opinion that that the Siemens AG also has a responsibility for the Kamp-Lintfort site. This is a big mess."

Rüttgers also responded to accusations by employees that Siemens and BenQ had "systematically cannibalized" the Germany-based phone division due to the expense of rehabilitating it. "If that's true," Rüttgers intoned, "then there must be legal consequences."

The chances for the division had never been great. Before the 2005 sale, Siemens was widely considered to have been too late to recognize important trends such as color displays, integrated cameras, or MP3 functionality. When BenQ bought the subsidiary, Siemens handed the Taiwanese company €350 million in investments and debt transfers, and the right to use the Siemens name for five years to come in an effort to get the company off the ground. Siemens workers, whose salaries were cut by a quarter as part of the deal, were guaranteed jobs through 2006.

But the problems started almost immediately. BenQ invested €840 million in the mobile phone project only to generate huge losses. In the first quarter of 2006, the company was in the red to the tune of €155 million. And that following a disappointing Christmas season last year.

"Despite progress with cost reductions and expenditure curtailments, increasing losses have caused this painful decision to become unavoidable," BenQ-chairman Kuen Yao Lee said. Just a year ago, the deal had been hailed by Siemens head Klaus Kleinfeld as an opportunity to "create lasting perspectives for customers, employees, and shareholders."

Now, not long after Lee assured the public that "BenQ Mobile remains an important pillar of the company," he announced on Thursday that all BenQ Siemens mobile phones will henceforth be developed and produced exclusively in Asia.

The top management at Siemens has been sharply criticized for its handling of the affair. Chairman of the board Heinrich von Pierer recently opted to increase the salaries of executive board members by a whopping 30 percent, a move that prompted widespread disapproval both from within and outside of Siemens. "The executive boards are largely responsible for this difficult situation," the Siemens employee council exclaimed.

This sentiment was echoed by the Bavarian IG-Metall unionist Werner Neugebauer, who claims that "once again, this tragically proves how the problems of individual Siemens branches are not the fault of excessively high wages for its workers, but rather the incompetence of its management." Neugebauer's colleague in North-Rhine Westphalia, Detlef Wetzel, went even further, saying that this "enormous injustice" was caused by "unscrupulous managers who don't give a shit about the fate of other people."

Siemens, for its part, showed surprise at BenQ Mobile's decision to cut off the flow of money and drive its German enterprise to insolvency. "We understand neither the intentions nor the background of BenQ's actions," a spokeswoman for Siemens said. Meanwhile, it is unlikely that a new buyer will be found any time soon, and many experts doubt that there is any hope at all of a positive solution to the problem.

The elimination of BenQ Mobile throws the future of German mobile communications into doubt. For the time being, large suppliers such as Nokia and Motorola are gaining market shares at the expense of small fish like BenQ or LG. The two giants together dominate over 50 percent of the market in Germany.