As the son of a military engineer, Martti Ahtisaari spent most of his childhood on military bases. He may be soft-spoken -- his English inflected with a gentle Finnish accent -- but when Ahtisaari gets down to business, his soft voice can command just as much attention as a military commander's.

This mutability is one of the reasons the 68-year-old Finn has been so successful -- and why most see him as an effective mediator and crisis manager. He began his career as Finland's youngest ambassador, and in 1989 helped shepherd Namibia into independence. He later worked as the United Nations Special Envoy for the humanitarian crisis in the Horn of Africa and then, in 2005, as a peace negotiator in Indonesia's troubled Aceh province, for which he was nominated for the 2005 Nobel Peace Prize.

Now, though, Ahtisaari -- who served as Finland's president from 1994 to 2000 -- has set up shop in downtown Vienna. On Monday, he and a team of hand-picked aides began their next great task: Ahtisaari heads up the talks currently being held in the Austrian capital aimed at determining the final status of Kosovo.

At issue is the biggest remaining source of conflict in Europe, as well as the delicate question of the future status of the troubled, predominantly Albanian province of Serbia.

Ever since 1999, when NATO bombs put an end to a Serbian-led ethnic cleansing of the region and forced Serbian dictator Slobodan Milosevic to cease hostilities there, Kosovo and its 2.1 million inhabitants have been under UN supervision. And it has become one of the international community's most ambitious peace projects. The European Union alone has already spent more than €1 billion on reconstruction in the province. Although the NATO offensive ended almost seven years ago, 17,000 troops -- sent by 35 different nations -- from NATO's Kosovo Force (KFOR) continue to provide security and stability in the region. Albanians, who make up 90 percent of the population, and Serbs must learn to once again live side-by-side in peace.

Under an agreement reached by the international Contact Group for Kosovo, made up of the United States, Russia, France, Great Britain, Germany and Italy, Kosovo's political limbo will now finally come to an end. Otherwise, the unresolved issue of Kosovo threatens to develop into a permanent risk factor in the Balkans.

A look at the divided city of Kosovska Mitrovica, where the two ethnic groups remain deeply divided, is enough to highlight the region's entrenched problems. The northern section of the city, populated by Serbs, is artificially linked to the motherland with money from Belgrade. The only link between the Serbian enclave and the Albanian section of the town is a single bridge across the Ibar River. But hardly anyone crosses this divide. Ghostly silence now prevails in a place that witnessed a bloody clash between Serbs and Albanians only two years ago -- and the city's tense and nervous atmosphere is mirrored in other, smaller Serbian enclaves throughout Kosovo.

The Vienna status negotiations are meant to finally bring peace to the region. But in which direction is Kosovo headed? Toward the independence the Albanians categorically demand and the Serbs reject just as vehemently? Indeed, the two opposing positions are staked out so clearly that a compromise acceptable to both sides is difficult to imagine.

Now all parties in the conflict seem to be pinning their hopes on Ahtisaari. The cool-headed Finn with the aura of the kindly elderly gentleman comes to the table armed with a proven track record in similarly delicate negotiations. The diplomat is also extremely familiar with the Kosovo issue, having negotiated the withdrawal of Serbian troops and the end of the NATO bombardment of Belgrade on behalf of the EU in 1999.

Ahtisaari is practically legendary for the determination with which he forced Serbian ruler Slobodan Milosevic to agree to the withdrawal. Milosevic's initial reaction to the peace proposal he was being offered by the West and Russia was one of dismayed silence. "Can't we change some of these terms?" the despot finally asked. Ahtisaari simply shook his head. The stubborn Finn's body language, typical of his negotiating style, sent a clear and unambiguous message: no, sorry, that's it, nothing further. Ahtisaari's performance was so successful that it prompted the media to celebrate him as "Europe's new star."

But will Ahtisaari succeed where so many others have failed?

There are some indications that a workable solution might be reached -- prior to the Monday start of negotiations, members of the Kosovo Contact Group appeared to have reached an unexpected consensus that the province should gain its independence. Even the Russians, who have consistently made a show of support for their Serbian brothers' efforts to hold onto one last bit of territorial sovereignty, have apparently yielded to the majority opinion.

But just to make sure that there would be no surprises at the negotiating table, the negotiators spent last week immersed in a hectic round of diplomatic maneuvering. Despite internal power and leadership struggles, the Kosovo Albanian delegation has managed to bring a unified plan to Vienna. In Belgrade, though, confusion has prevailed. The Serbian government has let it be known that what it wants for Kosovo is "more than autonomy and less than independence." But Serbian President Boris Tadic promptly informed Prime Minister Vojislav Kostunica, his domestic political rival, that this was nothing but a "pipe dream."

And even Kostunica, it seems, has chosen to place the emphasis on "less than independence." Arm in arm with the Serbian Radical Party and the Orthodox Church, he has continued to up the ante. Serbia, he has indicated, would treat an independent Kosovo as a foreign occupation of Serbian territory -- the Serbian military would be obliged to do everything in its power to protect Serbia's territorial integrity. Even Defense Minister Zoran Stankovic felt obligated to smooth things over, assuring critics that Belgrade had absolutely no intention of becoming involved in another military conflict. 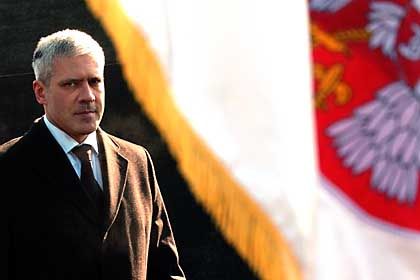 The mixed signals coming out of Belgrade are an indication of the Serbs' helplessness. There are many signs that Serbia's political leadership has already resigned itself to losing the province. Indeed, its current threatening posture is merely an effort to save face -- and to provide an alibi for future elections. But, Serbian President Tadic has set one minimum goal: Under no circumstances may Kosovo have its own army, nor its own seat in the UN.

"No getting around an international presence"

In the Kosovo capital of Pristina, on the other hand, the Kosovars are demonstratively self-confident. Political routine has returned to the province in the wake of the late January death of former Kosovo President Ibrahim Rugova, the charismatic champion of the Albanian push for autonomy. Fears that Rugova's passing could pave the way for more radical politicians have not materialized so far -- though radical bands of former Kosovo Liberation Army fighters have threatened the new leadership with revenge should it accept anything less than clear and unambiguous independence. But Rugova's successor, Fatmir Sejdiu, has maintained the Rugova line. For Sejdiu, a professor of law, the long-awaited separation from Belgrade is a done deal. "We could actually declare independence right away," he told SPIEGEL.

But Sejdiu is also practicing moderation. He has sought to allay the fears of those who see Kosovo independence as a trigger for ethnic Albanians in southern Serbia and Macedonia to call for a Greater Albania. The UN has likewise categorically rejected such a scenario, making it clear that the idea of shifting borders to accommodate Albanian nationalism is not up for discussion.

An independent Kosovo will remain dependent on the West for its survival. According to negotiator Ahtisaari, there is "no getting around an international presence." Although the European Union will likely play the key role in Kosovo, NATO and the Organization for Security and Cooperation in Europe would also have to continue their presence in the province.

But before that happens, many detailed issues will need to be resolved in Vienna. It could take months. And what happens if radical forces suddenly torpedo the negotiations?

Chief negotiator Ahtisaari is unruffled over the issue. "What do I have to lose?" he asks, smiling. "If you've already been successful in resolving a similar issue in the past, everyone is convinced that you'll do it again."

Ahtisaari himself seems to think so too.