As a practicing Catholic, Philipp Rösler knows that remaining true to your beliefs sometimes requires you to resist reality. The head of Germany's business-friendly Free Democratic Party (FDP) and the country's economics minister provided a hint of his unshakable conviction two weeks ago when the heads of state and government of euro-zone countries met in Brussels for an emergency summit to hammer out a second bailout package for Greece. "The summit showed that we are not headed toward becoming a transfer union," Rösler claimed.

In reality, the summit actually did push the European Union a good bit closer to becoming a transfer union -- with the forceful assistance of Rösler's boss, German Chancellor Angela Merkel.

Already decades ago, the European Union started providing financial assistance for building roads, setting up telecommunications systems and assisting underdeveloped regions. In 2009, Germany transferred €6.4 billion ($9.22 billion) more to Brussels than it received from it. France and Italy are net contributors as well, as opposed to Poland, Portugal and Hungary (see graphic). But whereas these sums are limited and earmarked for specific purposes, the measures tied to the euro bailout involve unprecedented payments -- especially after the meeting in Brussels.

Merkel and her colleagues have now pushed the doors wide open for a European community based on shared liability. As a result of their decisions, euro-zone member countries will have to provide much greater guarantees for the solvency of countries that have run into financial trouble. In other words, there will now be an even greater redistribution of wealth between the richer and the poorer states.

Past assurances have been forgotten. Just last March, Merkel promised, "I won't allow there to be a transfer union," and stressed that each country had to be able to pay its own debts. But, when it comes to the most recent bailout package, Merkel is only opposed to a transfer union that functions as an "automatic financial equalization scheme in Europe."

Experts see things differently. They refer to a transfer union as one in which collateral or loans can be transferred from one country to another whenever necessary.

One of these experts is Jens Weidmann, the former economic adviser to Merkel who has now become the president of the Bundesbank, Germany's central bank. Weidmann sharply criticizes his former boss, but he couches his words in economic jargon, saying: "By shifting extensive additional risks onto the countries providing help and their taxpayers, the euro area has taken a major step toward a pooling of risk."

But others pronounce their judgment much more clearly. As Clemens Fuest, an economist at the University of Oxford, puts it: "Brussels was a considerable leap in the direction of a transfer union."

The heads of government decided that Greece, Portugal and Ireland would only have to pay approximately 3.5 percent rather than 4.5 percent interest on their emergency loans. At the same time, countries like Italy, Cyprus and Belgium will have to pay much higher interest rates on the money they have borrowed to help bail out these countries. "Taking out expensive loans and extending cheap ones -- that's a clear sign of a transfer union," Fuest says.

But that isn't the only feature. As part of the euro-zone bailout package, member states are putting their own good reputation and creditworthiness on the line in order to raise the money needed to help countries with teetering economies. In this case, there hasn't been any direct transfer of funds yet because the countries contributing them have so far only extended guarantees. But, in doing so, they have been freeing their cash-strapped partner countries from a major part of the risk.

The way that funds will be redistributed between donor and recipient countries will be similar if the Luxembourg-based European Financial Stability Facility (EFSF) extends bridging loans to Italy or Spain or if it takes the sovereign bonds of crisis-hit countries off the market by replacing them with its own. Doing so would bring relief to troubled states. But it would also make all of the other euro-zone countries accountable to investors for the debts of these troubled states.

The measures that the European Central Bank (ECB) has been using to assist the euro bailout work according to the same principle. The bank also buys up the sovereign bonds of debt-stricken states or accepts them as collateral for fresh loans. This has meant that several billion euros are now idling away on the ECB's balance sheets as risks that might costs member countries several more billion euros.

Admittedly, that would only happen if there were an emergency, such as if Greece, Portugal, Ireland or another member country announced it could no longer fully repay its debts. For this reason, the earmarked loans and guarantees have thus far represented only potential transfers.

Nevertheless, it is still possible to put a number on the figures involved. Deutsche Bank Research calculates that Germany bears a share of €144 billion for the bailout plans already decided upon, and that Germany could also be liable for an additional €110 billion as part of help provided by the ECB. Added to that are the at least €20 billion making up Germany's share of the second bailout package for Greece.

Skeptics are expecting even higher figures. They calculate that the EFSF bailout fund needs to be bolstered because it has taken on additional functions. Indeed, Fuest, the Oxford economist, assumes that it will have to be double or tripled -- or possibly even more. "If Italy gets into a crisis of confidence, even that won't be enough," he says. In that case, he believes that other euro-zone countries would have no other choice but to guarantee all of Italy's €1.8 trillion in debt.

Granted, since none of these countries would become completely insolvent, no one seriously believes that these amounts will actually become due. But many of them are still asking whether donor countries might be better served if all of the euro-zone countries shared a common economic government that paid attention to how they financed their national budgets. This move could come in two possible forms.

According to the first, countries in the currency union could set up common bonds known as "euro bonds." In this case, participating countries would come under scrutiny on the financial markets collectively rather than individually. What's more, using this common financial vehicle would lower the risk of having a member state slide into national bankruptcy.

Unlike today, all of the participating countries would be required to pay the same interest rate. This would mean a significant reduction in financing costs for troubled states because creditors would know that all of the countries in this group were obliged to pay back the debts of any one of its members.

Backers of the euro bond option are also betting that there would be an increase in global demand for this new financial product. As they see it, it would be more attractive than the fragmented range of sovereign bonds currently on offer in the euro zone. Their attractiveness would then hopefully trigger a run on the common bonds that would increase their market value and thereby lower their interest rate.

Still, euro bonds would also have certain drawbacks, particularly for countries enjoying the top AAA rating of the rating agencies, such as Germany, France and Austria. The reason for this is that the common bonds would have a lower creditworthiness because they would also involve countries with lower ratings. In real terms, having their ratings lowered would force the more exemplary countries to pay higher interest rates than they have been.

Ansgar Belke, an economics professor at the University of Duisburg-Essen and a research director at the Berlin-based German Institute for Economic Research (DIW), estimates that it would burden Germany with up to €15 billion in additional costs each year. Other experts have put this figure at up to €25 billion.

Calculated over a 10-year period, these new bonds would probably cost the Germans much more than what they might have to pitch in for the bailout packages. Likewise, this also completely leaves aside the possibility of additional risks and knock-on effects. "Euro bonds could bring short-term relief to some countries," Belke says "But, over the long term, they would lead to disaster because they open the door to even more indebtedness." That is especially true for countries that are already heavily indebted: They could afford to borrow more money because their interest payments on the euro bonds would be lower.

The second option would involve organizing a financial equalization scheme in the euro zone -- similar to the one used between German states -- that would see money flow steadily from stronger into weaker countries. Studies on this issue show that hundreds of billions of euros would have to be redistributed among the euro zone's poorer and richer countries in order to balance out the varying strengths of their economies.

For example, a study by the Freiburg-based Center for European Policy (CEP) assumes that prosperous countries would have to transfer €108 billion to their poorer partner countries in order to restore their creditworthiness. Deutsche Bank Research uses different levels of government income per capita as its basis, and says Germany would need to pay in €12 billion per year to balance out the differences.

Kai Konrad, the managing director of the Max Planck Institute for Tax Law and Public Finance, and Holger Zschäpitz, a senior writer at the conservative daily Die Welt, arrive at a much larger figure. According to their calculations, the figure would reach the horrendous annual amount of roughly €74 billion. This kind of transfer union, they write, would be "neither economically nor politically feasible, nor a desirable prospect."

No matter which of these options were employed to level the playing field via a financial equalization scheme, two things are already certain: It would be expensive, and Germany would be one of the major financial contributors.

Of course, this is already the case with the bailout mechanisms currently in place. But there would be one critical difference: Under the current schemes, there is still a chance that the bailouts would finally end and that Germany would at least get part of its money back. But, under a permanent financial equalization scheme, neither of these would be possible. 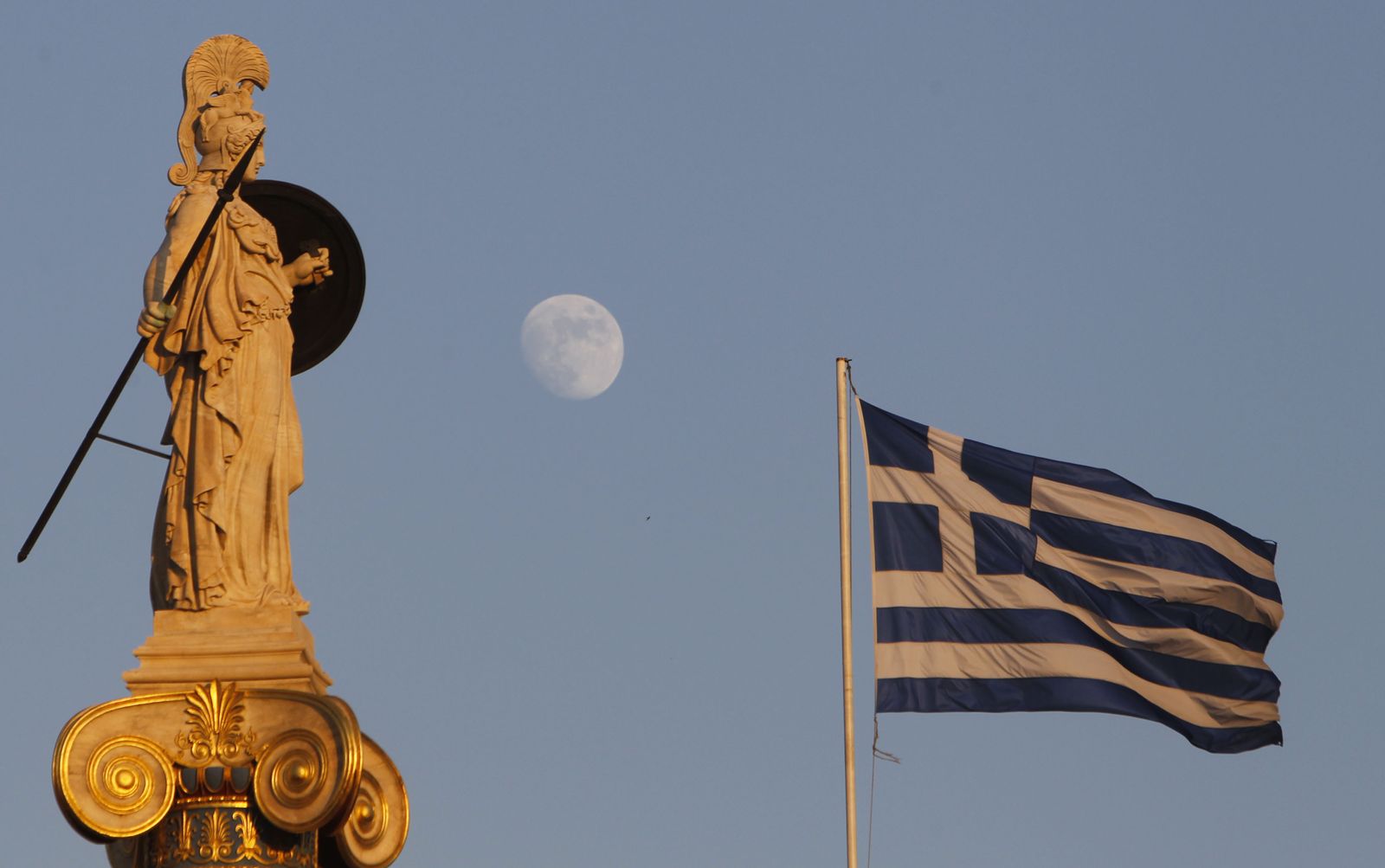 The 19th century statue of the ancient goddess Athena in Athens. The emergency EU summit on Greece last month pushed Europe closer to a transfer union.