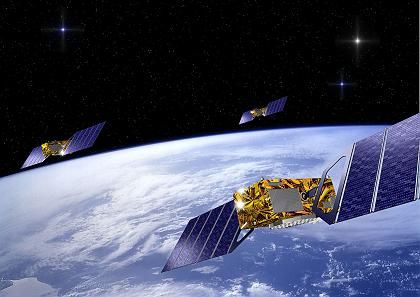 The Galileo satellite system, shown in this computer graphic, was meant to go into operation in 2008. But now it looks as if that may have been a pipe dream.

It's a seductive idea: A heavenly travel guide capable of determining positions down to the meter, providing billions of euros in annual revenue and creating more than 100,000 jobs. And all that for the bargain price of €3.6 billion ($4.7 billion) -- the cost of 150 kilometers (93 miles) of urban highway.

Thirty European "Galileo" satellites were originally meant to be beaming their position signals down to Earth as early as 2008 -- thereby providing a serious alternative to US global positioning system (GPS) satellites. But today's reality looks different.

Galileo's new administrative director Pedro Pedreira will likely present a sobering report at the Munich Satellite Navigation Summit this week. Pedreira warns that Galileo will be going into operation in 2012 "at the earliest."

With that, fears that have been circulating in the satellite navigation business for months will be confirmed at the highest level. The prestigious European Union project is developing along the same skewed lines as the Airbus A380 before it -- crushed between a "me first" mentality and bickering national collaborators.

Pedreira, who has headed the Galileo Supervisory Authority (GSA) since January, is something like a master builder for the two main sponsors, the EU and the European Space Agency (ESA). He was hired to supervise a consortium of eight companies as they set up the orbital positioning system, but things have turned out differently. The consortium has yet to name a director, and the companies involved have not been able to agree on a contract. Spanish companies are currently stalling the negotiation process by demanding a control center be set up in Spain in addition to those already planned in Italy and Germany. There's method to this: Germany secured its own control center by stalling negotiations in the same way, in 2005.

Now Pedreiro has announced that more than "single cases" are at stake and that the "problems" involved in the Galileo project need to be dealt with "point by point," adding that there are signs that this may take until the end of the year. Only then will it be possible to sign a contract and begin setting up the system, he says.

This systematic and thorough approach is controversial. The Federation of German Industries (BDI) criticized the slow progress being made in a statement issued last week. German Transport Minister Wolfgang Tiefensee of the Social Democratic Party (SPD) wants to use Germany's rotating presidency of the EU Council to step on the toes of the companies involved. Tiefensee has called on those companies to propose solutions by the end of this week. Large amounts of money are at stake, and Germany is Galileo's largest sponsor.

There may be a high price to pay for the egoism of the collaborating nations. The longer the European tug of war continues, the less signficant the technological head start becomes. The United States is already modernizing its outdated satellites. And India is collaborating with Russia to develop an improved version of its antiquated Glonass satellite.

Now China is developing its own system, called "Compass." And Beijing has already purchased satellite-compatible atomic clocks in Switzerland -- from Temex, the same company that is also supposed to equip Galileo.