Editor's note: Documents released Thursday by the British Foreign and Commonwealth Office illustrate how Prime Minister Margaret Thatcher, a bitter opponent of German reunification, insisted that her government resist the historic development. The 500-page collection of long-secret letters and memos about the reunification process date to between April 1989 and November 1990. They show that the British government played a far more constructive role in German reunification than had been previously thought. Only Thatcher had serious doubts about the change.

You can also read an interview with Sir Christopher Mallaby, Britain's ambassador to Germany from 1988 to 1992 about Thatcher's role in reunification and her tense relationship with Chancellor Helmut Kohl.

SPIEGEL: In his notes and protocols, Charles Powell, former foreign policy advisor to British Prime Minister Margaret Thatcher, relates a meeting with Francois Mitterrand on Jan. 20, 1990. The French president supposedly said during this encounter that if East and West Germany were to reunite, Germans could "win more territory than they ever had under Hitler." Is the quotation a real one?

Dumas: I myself wasn't present at the Elysee (Palace). But as far as President Mitterrand's fundamental position is concerned, I can officially rebut this -- it doesn't fit at all to his atttitude to reunification as I observed it. The quotation seems to me exaggerated, crude and unlikely. That's my word against Mr. Powell's.

SPIEGEL: He describes Mitterrand, in light of the approaching German reunification, as "a person in a state of panic."

Dumas: There wasn't any panic. But the discussions with (then German Chancellor) Helmut Kohl were open, direct and sometimes brutal, especially from Madame Thatcher's side -- but the German chancellor wasn't easy either. Even if Mitterrand fostered a certain degree of mistrust, it was at most a 100th of what Thatcher was saying about Kohl. At the December 1989 European Union summit in Strasbourg, Mitterrand had to draw on all his abilities to mediate between the British prime minister and the chancellor. I observed incredibly inappropriate comments toward the German chancellor on Thatcher's part. They quarreled terribly.

SPIEGEL: Mitterrand is said even to have offered a new "entente cordiale," an alliance to keep the Germans in check.

Dumas: The president always told me that for him it was about one thing: Would Germany return to its role from before the war and a policy of pushing its borders outward? Or would Kohl include his newly reunified country in the structure of Europe? To allay Mitterrand's misgivings, (West German)Foreign Minister Hans-Dietrich Genscher made a special trip to Paris, at my request. 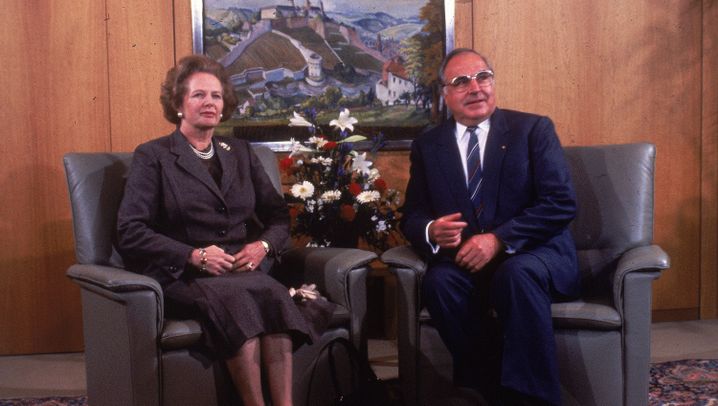 Dumas: That was Kohl's attitude as well. He was representing German interests first and foremost, but he certainly also thought on a Europe-wide level. Perhaps both of them had misgivings, but all emotions aside, Kohl and Mitterrand shared the same position.

SPIEGEL: Did that eliminate fears of a "Fourth Reich"?

Dumas: Any comparisons with Hitler and the Nazi regime are insulting and historically inaccurate. No, that feeling wasn't there.

Dumas: A reunited Germany became possible only with Mikhail Gorbachev's endorsement. The moment Kohl got Moscow's approval, reunification could no longer be stopped.