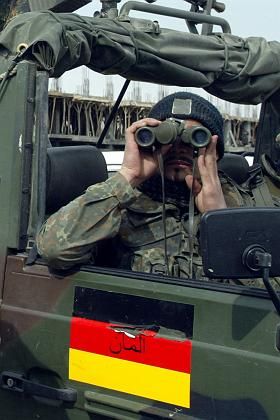 The view from Kabul: NATO allies have accused Germany of taking a backseat in the comparatively safe North, while its allies face the dangerous and sometimes fatal missions in southern Afghanistan.

Pressure on the Germans to participate in the NATO mission in southern Afghanistan has been much stronger than previously assumed. Several requests were given for help from German troops stationed at the headquarters of the International Security Assistance Force (ISAF) in Kabul. These requests occurred before and during "Operation Medusa," a military offensive that was conducted against a strengthened Taliban in September.

At one point, for example, NATO's local military command requested the deployment of a German "Transall" cargo plane with an on-board medical team (MedEvac). The flying transport was to redeploy from its German base in the Uzbek city of Termiz and be stationed in Kandahar. While the Germans did fly one mission, they refused to leave the aircraft permanently in the south. Their argument: The response time would not be improved by flying out of Kandahar.

The reconnaissance drone "Luna" was also supposed to redeploy to Kandahar, but officials in Berlin said the small unmanned aircraft was already on a transport from Kabul to Mazar-e-Sharif. Similarly, NATO allies asked Germany to provide units that could "steer fire from the air," referring to the ability to coordinate fighter jets and attack helicopters in supporting missions for ground troops -- an ability which German Special Forces possess. Berlin, however, informed its NATO allies that although its elite combat units (KSK) and naval special forces were on active duty in Afghanistan, they were preoccupied with preparations for another ISAF mission and were therefore undeployable.

This was particularly problematic for the chief of operations in Kabul, a German general who was responsible for putting together troops in Afghanistan for the multinational staff of British ISAF commander David Richards. The high-ranking officer had to be the bearer of bad news to all sides. The requests were not part of any formal NATO process, but rather unofficial approaches at the lower day-to-day work level. Another German military official at the headquarters experienced the tensions first-hand: "One couldn't help but feel like a lousy comrade."

German ISAF officers believe the decision not to send special forces into combat as "forward air controllers" may also have been influenced by timing this autumn. At that juncture, the extension of the ISAF mandate was being considered by the German parliament, and the government feared it might have trouble getting approval. After all, a mission in volatile southern Afghanistan with potential casualties could have unhinged the entire German ISAF mission.

Officials in Berlin remain self-confident: The allies' advances were not brushed off on general principle, but always "for pragmatic and military reasons," Defense Ministry sources say. There, the prevailing opinion is that the German contribution is not adequately appreciated: The KSK was deliberately not sent to Kandahar because it was planning an incursion that was important for the overall ISAF mission.

Even though six weeks passed before the execution of that incursion, it would prove to be a very important one. On Oct. 14, a so-called "guesthouse" for suicide bombers was raided in southeast Kabul. For many years, a man believed to be a high-level middleman in the Afghan-Pakistani terror network had been harboring jihadists there. They would take refuge with him before suicide missions, and the jihadists who sought haven there are believed to have included those responsible for the June 7, 2003 attack on a bus that killed four German soldiers and injured another 29. In the time since the KSK completed its operation, the number of suicide bombings in Kabul has shrunk considerably.