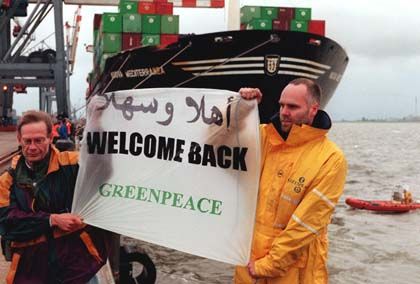 Greenpeace protesting against a shipment of toxic waste.

The trip was planned as meticulously as if a government leader were arriving. The most reliable container ships have been selected for the journey, the crews receive special training and the captains have been ordered to avoid busy sea routes -- for safety reasons.

The mission is to ship a dangerous cargo half way around the globe: Four freighters will bring 22,000 tons of hazardous waste from Australia to Germany's northern Schleswig-Holstein region. The toxic containers can only be stored below deck to prevent any of them falling overboard in a storm.

Once the contaminated cargo has arrived in Germany, it will be taken to special incineration plants by train and in trucks -- to Brunsbüttel, Herten, Dormagen and Leverkusen. There, the carcinogenic hexachlorobenzenes from Australian chemical company Orica's solvent production will be "rendered harmless" by 2008, according to the incinerator operators.

The trip from one end of the world to the other reveals an economic sector that has expanded in Germany largely unnoticed until now: Germany has become one of the major importers of hazardous waste from all over the planet, a giant waste disposal facility for the rest of the world. Munitions waste from Sweden, pesticides from Columbia, asbestos-contaminated rubble from the United States, solvents from China and lead-acid batteries from Montenegro.

Nothing that harms human beings, animals and the environment seems to be missing on the list, which is meticulously kept by the German Environmental Ministry. And the amounts have tripled since 2000 to reach more than 2,000 tons. Import volumes of asbestos-contaminated waste has risen by 400 percent in this period -- that of industrial sludge by as much as 500 percent.

Sell us your waste

The reason behind this economic growth consists in Germany's unusually strict environmental regulations. They've ensured that the world's best hazardous waste incineration plants were built in Germany, which also has the greatest know-how. But the high-tech incinerators only make economic sense if they are used at or near full capacity. Germany's plant operators would face overcapacities of as much as 20 percent if they didn't process hazardous waste from abroad.

Hazardous waste disposal in Germany has been on the rise lately.

And since Germans are so eager to clean up other people's mess, other countries have been able to secretly shirk their own responsibility. The Basel Convention signed 18 years ago saw 170 countries make a commitment to disposing of their waste in their own countries to the extent possible. The convention was originally intended as a bulwark against waste exports to Third World countries.

But the Dutch don't have to send their waste as far as that. They've closed down two hazardous waste incinerator facilities in Rotterdam, since grateful takers are waiting just across the border, in Germany's North Rhine-Westphalia region. They get €900 ($1,182) per tonne. "You've got such good facilities," says Paul Braams from Rotterdam's waste combustion service. "Why should we spend good money to bring our own incinerators up to date?"

Organizations such as the Association for the Protection of the Environment and Nature (BUND), the German branch of Friends of the Earth, warn against the incalculable risks of hazardous waste incineration and accuse the country's waste managers of profiteering at the expense of the environment. But Joachim Beyer doesn't understand what all the fuss is about. The graduate engineer is head of the hazardous waste incineration department at Bayer Industry Services. He's responsible for several special incinerators in Leverkusen and Dormagen. "We have nothing to hide," the plant director says during a tour of his Leverkusen kingdom, where waste is incinerated at temperatures between 1,000 and 1,200 degress Centigrade (1,832 - 2,192 degrees Fahrenheit).

In the language of chemistry, what that means is that extraordinarily toxic organic combinations are broken apart. Only scoria remain, solidified in water baths. "You could use them for road construction," Beyer says, demonstrating their harmlessness by reaching into a pile of dark lumps that look like shredded glass. "The worst danger you face is cutting your hand," he says. The Bayer corporation deposits the scoriae on the plant's own dumpsite.

But something else remains after the incineration process: gaseous components of the hazardous waste that have the tricky characteristic of recombining in the form of toxic furan polymers and dioxins when cooled down to about 300 degrees Centigrade (572 degrees Fahrenheit). "Cracking them for good" is the job of various combustion chambers, rotation washers, condensation filters and a catalytic converter more than 30 meters (98 feet) large, Beyer explains.

The toxicity of what leaves the chimney at an altitude of about 100 meters (328 feet) lies far below the limit values, Beyer says. That toxicity is only measurable in picograms at best -- and one picogram is just a millionth of a millionth of a gram.

But scientists insist there is no such thing as hazardous waste combustion without harmful emissions. Harry Rosin, a professor of medical microbiology, even thinks the statements issued by the industry are "stultifying nonsense."

Even the best facilities release carcinogenic particles into the air, he says, adding that sooner or later, the dirt comes back to the ground, where the molecules are then eaten by grazing cows, thereby returning into the food chain. When that has happened, even tiny amounts of toxins are enough to harm human health, Rosin says.

Experts like Rosin are also convinced that those living close to the incinerators will pay the price for the controversial business development trend of the past years. Residents have been convinced "that the facilities are indispensable for the region," says Günter Dehoust from the Ecological Institute in Darmstadt. But now they're finding out "that waste from all over the world is being purchased because of overcapacity."

In Brunsbüttel, citizens are resisting the transformation of the region into a "global trans-shipment center for hazardous waste," as the spokeswoman of the local environmental association says. The four ships carrying their 22,000 ton cargo from Australia are to be unloaded in Brunsbüttel. The plan is for about half the waste to end up in the local incinerator. The other half will be loaded onto cargo trains and trucks and transported across the country along a 400 kilometer (248 mile) route.

It remains controversial whether the local facility in the Westphalian town of Herten is even suited for disposing of the chemical cocktail from Australia. "The chlorine combinations might not be completely eliminated in Herten, due to the low incineration temperature of only 900 degrees Centigrade (1,652 degrees Fahrenheit)," says Claudia Baitinger, the waste expert at BUND. Johannes Remmel, the secretary of the Green Party faction in the Düsseldorf parliament, thinks another question needs to be raised as well: that of "whether it's the job of local waste disposers to acquire hazardous waste from all over the world."

"Only weakly contaminated waste, such as barrels and other packages" is burnt in Herten, according to Orica spokesperson John Fetter. He adds that "Herten has developed a special method in which 900 degrees Centigrade (1,652 degrees Fahrenheit) are sufficient."

And so the German Environmental Minister and the local government in Düsseldorf have no objections to the waste deals -- on the contrary. "With its very good facilities for incinerating hazardous waste, Germany is assuming a part of the general environmental responsibility," says Environmental Minister Sigmar Gabriel from the Social Democrat Party (SPD). Gabriel argues that disposing of the waste in Germany is still safer than letting it be improperly deposited elsewhere or dumped into the sea. But in future, the Social Democrat would like to see the waste exporters build their own incinerators -- ideally with technology made in Germany.

China -- not noted for its environmental concerns until now -- seems to want to realize Gabriel's vision. Two up-to-date hazardous waste incinerating facilities will now be built in Beijing and in an industrial park in the northwest of the country -- using German know-how.