It's quiet around reactor no. 4. The only sound is a dull, monotonous hum -- probably a generator somewhere inside the enormous "sarcophagus," the concrete shell that was hastily constructed to seal away tons of highly radioactive rubble. The rusty patches around the iron support structure look like bleeding wounds. A blue sky arches above the gravesite of one of humanity's worst cases of hubris. Into the sky rises the notorious Chernobyl smokestack.

It's safe being here, the Kiev Department of Disasters insists. Maxim, the tour guide, poses comfortably for the camera, radiometer in hand. He knows how to hold the instrument so the dial and the reactor complex both appear in the picture. Hardly any radiation, he says. Renate Künast is nervous anyway. "I've got a strange feeling," the parliamentary leader of Germany's Green Party says. "Let's leave." Her colleague Rebecca Harms, who is member of the European Parlament, nods in agreement. She doesn't want to come too close to the disaster area either. You can't see, smell or taste radiation, she says. It's a bizarre experience, travelling to Chernobyl with these two veterans of Germany's anti-nuclear campaigning. Like many other tourists, we were led into the 30-kilometer (19-mile) "exclusion zone" in a small group, joined by Ralf Füchs from Germany's Heinrich Böll Foundation. "Of course this might be criticized as disaster tourism," Künast says shortly after we leave, "but sometimes it's important to go and see for yourself." The Green Party's parliamentary floor leader had really meant to go to an anti-nuclear conference, but then was tempted by the tour. Travel is a form of education, she says.

The devastating effects of tinkering with nature are nowhere as evident as in the exclusion zone. No Hollywood disaster flick could give an adequate impression of a city like Prypiat. The town was especially constructed for those working in the reactor complex. When the reactor exploded, spewing its lethal contents into the sky, 50,000 people fled. Now the tenement blocks stand skeleton-like and deserted. The tender green of a few chestnut trees and the occasional birdsong do nothing to alleviate the overwhelming sense of desolation. The exclusion zone is a thoroughly inhospitable place. South of the reactor complex lies a radioactive lake left by the reactor's water cooling system. If the dams constructed around this lake give way, the water could poison all of Kiev. Inside the various reactors of the Chernobyl complex, fuel rods remain; no one knows exactly what to do about them. And close by, equipment left by the reservists charged with clearing the disaster site rusts away in the spring sunshine: helicopters, trucks, cars -- more radioactive reminders of what happened on April 27, 1986, and of the work done thousands of men whom the Soviet authorities euphemistically described as "liquidators."

For the German Greens, Chernobyl represents far more than simply humanity's failure to safely handle nuclear energy. In a way, the disaster provided a justification for the existence of their party. Before 1986, the Greens had warned tirelessly of the dangers associated with nuclear power. After April 26, those dangers were suddenly there for all to see. Künast was already a Berlin politician at the time. 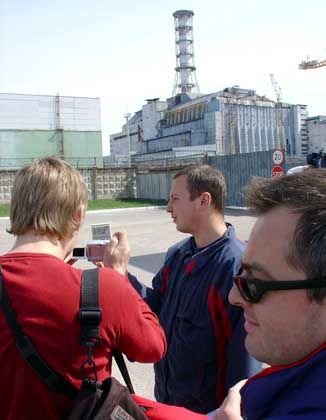 "We knew only little about what had happened, like everyone else," she remembers, "but our phone lines were busy the whole time." Standing in front of the decaying reactor complex, Harms and Künast represent the versatile vanguard of the anti-nuclear movement. Harms is the Joan of Arc of the protest movement formed in northern Germany's Wendland region: dark hair, red lipstick. Steeled by years of blockades and confrontations with the police over Castor atomic waste trains to and from France, she is now a member of the EU parliament. Renate Künast, with her spikey hair and mischievous grin, came to the Green Party from the anti-nuclear movement, and moved quickly up the party's ranks. Minister of Consumer Protection under the last federal government formed by the Greens and the Social Democrats, she is today the Green Party's leader in Germany's lower house of parliament.

It took only one night to part from her former ministry position, Künast likes to say. It's obvious the vivacious 50-year-old wouldn't mind being back in government. On her walk through a deserted village in the exclusion zone, she talks constantly about a variety of issues -- issues that need to be addressed immediately, she says. It seems Künast's loss of political power has left a kind of phantom pain. When she talks, she seems to forget that these days Green Party politicians are at best city mayors, and that the party is the smallest in parliament.

The political power shift has not been without effect. That the current coalition government is considering revoking Germany's earlier pledge to phase out the use of nuclear power is something Künast is particularly unhappy about. "Let them go ahead," she says mockingly, "a decision like that can only work out to our advantage." What genuinely angers her is the way the SPD is behaving: "It's disgusting to see Gabriel get up and make everything we decided negotiable again," she says with reference to the current Environment Minister, Social Democratic politician Siegmar Gabriel. In the end, she adds, the SPD knows very well that it's right to phase out nuclear power. "In any case, we won't support any backtracking," she says -- an empty threat, since the Greens are effectively excluded from the decision-making process.

On this Sunday in the exclusion zone, what unites the two politicians is mainly the past. "It looks almost like the Wendland," Rebecca Harms says, idling through an alley between overgrown houses.

Renate Künast remembers very different struggles -- such as those in Neuhardenberg, where the coalition government met periodically in order to discuss Germany's transformations. Künast remembers the slightly arrogant smile of Wolfgang Clement and other government ministers. "We had the better ideas," she says, as if to rid herself of that particular memory, "no one should forget that." Today, the new coalition government -- and the SPD in particular -- are taking credit for political decisions developed by the Greens, she adds.

Try as she might, Künast cannot break away from the past. When the bus stops near a newsstand, someone asks "our Minister of Consumer Protection" to suggest a purchase. "Former Minister of Consumer Protection," she replies. "Well, better than nothing," he grumbles. Then it's back to Kiev. And everyone is reminded that this not an official government visit when the bus breaks down, and the trip ends up taking hours longer than planned -- not something that would happen to a government minister.