The building couldn't be more German. It's equipped with incredible technology, and yet it looks a bit beat-up somehow. It almost resembles a dented can.

On Friday, German Chancellor Angela Merkel will travel to Stuttgart to celebrate the inauguration of the city's new Mercedes Museum. The museum, located near the Mercedes-Benz factory in the Untertürkheim neighborhood, is meant to emphasize the German industrial giant's mythological grandeur. Like most major new museums, a good deal of that is conveyed through its structure.

Dutch architect Ben van Berkel designed the museum according to principles developed in the construction of multilevel car parks: 110,000 tons of steel and concrete stretch the limits of modern engineering, making other car museums look like simple warehouses. The basic principle is that of the spiral corridor, pioneered by the architects of New York City's Guggenheim Museum.

Yet in Stuttgart the corridor doesn't just wind its way from the top floor to the earth like some oversized screw. Two intertwining corridors meander downward in the shape of a clover leaf. Inside this tangled construction, floors turn into walls and walls into ceilings.

Such complexity required an enormous amount of advanced planning: Around 35,000 blueprints were drafted in preparation for the masterpiece of concrete architecture. Engineers from the Werner Sobek, an international firm based in Stuttgart, describe the building's insides as "layered highway bridges." In fact, one of the building's engineering requirements was that its various levels have the same load capacity as a highway. After all, Mercedes isn't limiting its exhibit to regular cars -- it will also include industrial vehicles such as a replica of the bus that took the German soccer team to the 1974 World Cup.

The building was designed to present the legacy of the world's oldest automobile company in the most orderly manner possible. And the company spared no expense in doing so. Though Mercedes has kept its actual costs under wraps, reliable estimates put the total cost of constructing the largest corporate museum in the world at about €150 million ($192 million). When it opens its doors on Friday, visitors to the museum will be greeted by around 16,000 square meters (177,605 square feet) of exhibition space.

When he launched the design competition for the museum five years ago, Mercedes chief Jürgen Hubbert told the 10 competing architects that this should be "no ordinary exhibition." Van Berkel ended up winning with his proposal for a structure guaranteeing that the building would be as far removed as possible from the usual one-dimensional automobile museums. 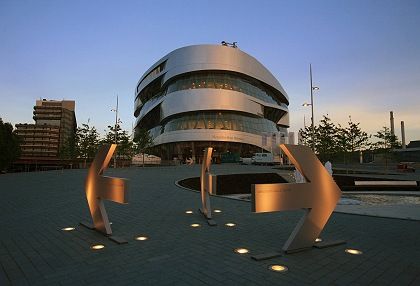 The grand opening of the new Mercedes Museum takes place on Friday.

After paying an €8 entry fee, a formidable time machine awaits visitors. The entrance leads directly into the heart of the building, a concrete atrium that stretches up 47 meters (154 feet) to the roof. If a fire should ever break out in the museum, the atrium will function like a chimney, sucking smoke from the exhibition space and funnelling it into the sky.

Visitors move upward in elevators, to the tune of travel noises that take them back in time, right back to the sound of hooves. When they enter the exhibition, they face a stuffed horse. Next to it is a quotation from Wilhelm II. "I believe in horses," the German Kaiser said in 1905. "Automobiles are a passing phenomenon."

The museum doesn't mention that the Daimler plants weren't expecting a grand future for cars at the time, either. The inventors of the automobile calculated that no more than a million cars would be sold on the world market. Flash forward 101 years and today Mercedes alone sells that many cars in 12 months. Daimler's pessimistic forecast was justified by the argument that only a small percentage of workers were suited for the job of chauffeur.

Twisting paths lead upward through the building. The route they trace is not haphazard. One corridor leads visitors through the "Myth Rooms," where the development of Mercedes Benz brand is narrated chronologically.

The second spiral leads through the "Collection Rooms," where Mercedes vehicles from all eras stand systematically arranged. The double helix structure allows for frequent shifts from one route to the other; the routes intersect on every floor.

The Collection Rooms help to lighten up the exhibition. Flooded with light from giant glass panels, they offer a pleasant contrast to the windowless chambers of the churchlike Myth Rooms.

There is even the occasional hint of irony. The exhibition room "Everyday Heroes" features a mint green Mercedes 240 D, built in 1982, with fur-covered seats and a trailer hitch. The exhibit is a nod to the company's more rustic customers, whose existence the marketing department has always liked to deny. "All that's missing is a greasy farmer's hat on the dashboard," says Stuttgart architect Hans-Günter Merz, who was charged with designing the building's interior. 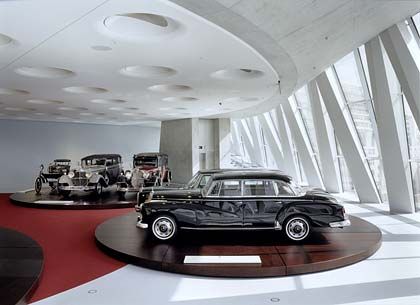 This model 300 Mercedes was the vehicle of choice of West Germany's first postwar chancellor, Konrad Adenauer.

The architect, who has plenty of experience with museums, has chosen to boldly travel the frontiers of good taste. He's filled exhibition rooms with kitsch devotionals and placed a Hearse in the "Everyday Heroes" section -- something the company was not particularly amused by, at least at first.

The "Gallery of Names" features the cars of celebrities, including a Mercedes Dora that blends sheer pomp with exquisite tastelessness. The Japanese emperor's limousine shares a room with a spoiler-equipped Mercedes 190 once owned by Beatles drummer Ringo Starr. The pop star's vehicle of choice might just as well have belonged to some shady underworld character from a smalltown red-light district.

The Popemobile in which John Paul II traveled through crowds of admirers like an aspic-preserved Father Christmas is hardly an example of high style either. Seen from up close, the wheeled glass case loses what little charm it ever disposed of. The gold-covered spokes and other ornaments look like cheap trinkets from a traveling carnival.

From St. Christopher to the pine-tree air freshener

In designing the exhibition, Merz chose to sprinkle 33 "extras" throughout the display rooms: tidbits of trivia explaining the history of the fender and the windscreen wiper, the figures of St. Christopher, the saint of travelers that some place on their rear-view mirror to serve as a guardian angel while they drive, right up to the small, pine-tree shaped cardboard air freshioners popularly used by drivers.

At the end of the exhibition, the two corridors combine to form a steep curve displaying the most important race cars in the company's history. Loud speakers blast original recordings of race car engines.

It's a grand chunk of automobile history that Mercedes has chosen to place outside its company headquarters.

The "Myth Rooms" lead the visitor through history with impressive clarity and logic at first. After the 1950s, however, the collection becomes a little muddled. The main theme allocated to the 1960s is security technology. Bizarre experimental cars that aren't necessarily representative of the company's tremendous achievements in the field leave the impression that security was just a one-time fad.

The following room isn't as convincing as it could be either. It's meant to celebrate the company's recent history and the brand's international reputation -- as if everything Mercedes produces today were perfectly flawless.

The exhibition pieces meant to document the high standards of the company today seem somewhat random. A Portuguese taxi that drove for a million kilometers (621,371 miles)without needing to have its engine replaced, but whose original taxi color has unfortunately been painted over, stands somewhat mysteriously in the spotlight. Another item on display is an all-terrain vehicle that has driven around the world -- which seems like what a customer would expect. There is nothing spectacular about Arnold Schwarzenegger's model S Mercedes; the former business car of some lower-level German politician might just as well have been placed there.

Merz, the museum's designer, is aware of these flaws. When visitors point them out to him, he replies with a formula not unknown to car designers: "There's still room for improvement."