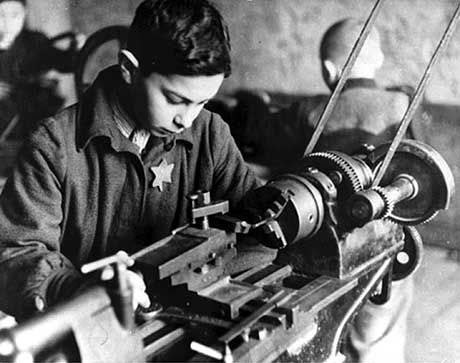 Wasn't this boy too young to be working_ And was he paid or not? All of these questions are used to determine if former ghetto workers get German pensions. Most don't.

In the summer of 1941, Schlomo Aronson went in for a short, friendly job interview. A Warsaw branch of the Chemnitzer Astrawerke AG was searching for people who could assemble calculating machines. When Aronson answered yes to the interviewer's curt question, "Do you speak German?" he received a pair of grey overalls and was told he could immediately start work. Payment was to be in cash, probably according to the pay scale of the German metalworking industry. "Had I not been trapped in the Warsaw Ghetto," remembers the 80-year-old who now lives in a suburb of Tel Aviv, "it would have just been a normal job."

Aronson ended up one of the tens of thousands of Jews who worked for peanuts in order to further German companies under the Nazi regime. In the ghettos of Eastern Europe, where Nazis forced Jews to live in crowded, unsanitary conditions, German officials and businessmen found a plethora of cheap labor. Unlike slave laborers, however, these workers did receive small salaries, although in most cases the sums were laughable. Some ghettos even had a job center that administered the job openings.

Yet, years after the war, when the young workers who survived eased into retirement age, German Social Security offices repeatedly refused claims that they -- like all workers -- deserve a government pension. To solve the controversy, the Bundestag, the German parliament, three years ago passed a law mandating that those who worked in a ghetto be compensated. (Gesetz zur Zahlbarmachung von Renten aus Beschaftigungen in einem Ghetto, known as the ZRBG). It was one instance in which both the government and the opposition agreed wholeheartedly about a proposal. Finally, exclaimed members of the opposition Christian Democratic Party, the shameful gap in compensation would be closed. The Greens, too rejoiced at the non-bureaucratic way a solution was reached and predicted that deserving workers "would soon receive payments."

But reality did not stick to the law. For most applicants, hope continues to end at the German Social insurance administration. Of 67,000 applicants, so far only 4,000 have received any sort of payment.

The high rejection rate is shaping into a diplomatic problem for German-Israeli relations, as every second applicant now lives in Israel. As the two countries celebrate their 40th anniversary of diplomatic relations, behind the scenes, the governments are, unbelievably, still fighting over compensation from Nazi-era crimes.

Several members of the Israeli cabinet complained to the Federal Minister of Social Security Ulla Schmidt (SPD) about the endless bureaucracy of the German system and that the law was not being applied in full. But Schmidt rebuffed all allegations. "A restrictive implementation of the ZRBG has not been detected within the Social Security offices," she said.

One question central to the controversy is just how free were the inhabitants of the ghettos and how much control did they have over their daily lives. Ironically, it is to a worker's advantage to prove he or she had more -- rather than less -- free will. That's because the law only grants a pension if the work "was done voluntarily." Although the pensions these workers are fighting for come out to the tiny sum of about 130 a month, for them, it is the principle that matters. As such, the clause about work being voluntary is pivotal as without it, many forced laborers would also be eligible for government distributed retirement funds. That is not to say that these slave laborers are not entitled to anything. In fact, since summer 2000, a special federal trust has been allotted to distribute compensation to them.

Even the government in Berlin admits that the requirements needed to receive compensation are tough to meet. And for those charged with proving how much free will a worker had, it is, as State Secretary Franz Thoennes explained to the German parliament. After all, how do you "search for evidence of free will in places that were specifically created to deny freedom?" A certain degree of goodwill would aide the situation, a degree of goodwill the German Social Insurance administrations seems to lack. They hone the applications for the smallest contradictions and demand documents from people who barely came out of the Nazi terror alive.

Schlomo Aronson's application was, for example, denied by the LVA (Regional Pension Insurance Institution) Dusseldorf, the branch responsible for survivors living in Israel. The reason? In an earlier questionnaire, he had said that in 1956, he was forced to be a slave laborer. His statement was true. But it did not mean he had not been a nominally paid labourer before that. After 1942, when Astrawerke shut down, Aronson was forced to work for nothing.

For many Jews, however, the horrendous conditions of Ghetto life made holding even normal jobs terribly stressful. As such, the Federal Insurance Institution for Employees, insists that these circumstances should be considered when dealing with applicants. As such, it insists, "former (contradictory) claims that they were slave laborers" should be understood subjectively. For indeed, when one is persecuted, one might feel one is working as a slave labourer, even if one was nominally paid. As such, former claims, said the institution, "should not be used against applicants if the applicant now elaborates on the actual circumstances." Still, the letters denying the applications speak their own language.

Free will or forced labor? 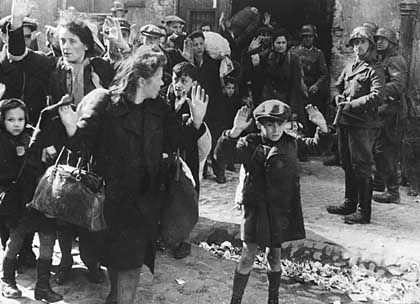 One of the tricks of getting compensation is proving that life in a ghetto -- a place designed to repress freedom -- was governed by free will.

Another frustrating, but very real possibility, is that many of those who got pay knew nothing of it. In some cases, as a July 5, 1940 letter from the German governor of the occupied Polish territories suggests, the workers' salaries went straight to the Jewish community. For these workers, there is little hope, as only those who recall being paid have claims to the pensions proscribed by law.

Another big problem for applicants is that all too often, the most simple ghetto jobs are quickly dismissed as forced labor. "The sort of work you claim in having done (road works, cleaning jobs)," the LVA Rheinprovinz brought forward in several cases, "are typical cases of work not resulting from free will and which were usually not done for pay."

Documents, however, prove the opposite. For example, the town council of Sosnowiece had a pay roll for its "Jewish skilled and unskilled laborers" who worked cleaning roads. Two years ago, the problem came to a head and seemed to reach something of a resolution at a meeting between German representatives of the pension funds and delegates from the Israeli national insurance. "A differentiation of forced labor and work in a ghetto cannot be determined by the kind of work done," the protocol of the meeting reads. It is signed by a delegate of the LVA Rheinprovinz. But in practice -- as in so many other cases -- nothing has changed in the way applications are handled or funds granted.

Holocaust survivor Lea Rebisch sits in her living room in Tel Aviv and is holds a letter from Dusseldorf in her hand. Rebisch is 75 years old. She was 11 when the Nazis locked her, her mother and her older sister into the Ozorkow ghetto. The three worked sewing fur collars to soldiers' jackets in a factory outside the ghetto. They were watched all day by armed guards. Although they did the same work, only Rebisch's older sister -- who died last year -- received a ghetto pension.

It "cannot be determined without doubt that you were a seamstress for rabbit fur and that you were considered a normal employee," her letter reads. The reason? Lea Rebisch was too young to really work. "It's a lie," she says, outraged. "My ghetto work has been testified to by witnesses."

Youth is a common reason German bureaucrats use to refuse an application. Pension authorities have even gone so far as to claim that in those ostensibly lawless times, child labor was "generally forbidden." To prove so, they cite the April 30, 1938 Law for the Protection of Youths.

Rebisch is fighting the refusal with her Berlin lawyer Simona Reppenhagen, who represents a large number of the 12,000 former ghetto inhabitants. Of course, it can take time until the paperwork gets processed and a judge decides on the case. And none of the survivors are getting any younger. "By now I receive as many refused applications as death certificates," Reppenhagen says.

In March, Natan Sharansky, who this month stepped down as Minister of Diaspora Affairs, sent a five-page letter of complaint to Berlin Minister of Social Affairs Ulla Schmidt. In the letter, he said, "I fear that most of the Holocaust survivors won't live to see their application granted." Until today, neither he -- nor his replacement -- has received an answer.