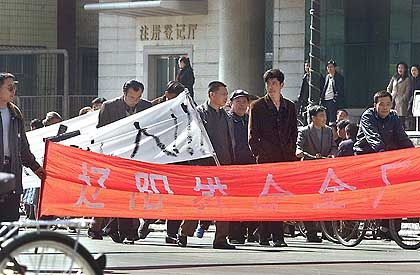 More and more Chinese are attending demonstration and other forms of protest.

Police first arrested Jiang Qisheng in September 1989. He was participating in the student demonstrations on Tiananmen Square that were smothered in a violent bloodbath by the military on June 4. He was sentenced to one and a half years in prison.

In 1994, he landed in jail a second time for distributing money from American donors to the families of the victims of the '89 massacre. This time, luckily, they only held him for a month and a half.

The third time he didn't get off so lucky: he got four years in prison for writing an article critical of Beijing in a Hong Kong newspaper. He was, said the court, "attempting a coup." The 56-year-old got his freedom in 2003.

A former university lecturer, Jiang has had to pay a bitter price for insisting on expressing his right to criticize the Beijing government. The aerospace engineer is no longer allowed to teach, and he is under the constant surveillance of secret police informers. At times, they don't even allow him to leave his apartment at the Beijing Teacher's College.

Nevertheless, he remains an unbroken man. In order to overcome the corruption and the growing divide between rich and poor, dramatic political reforms must be undertaken, he argues. "First freedom of expression, then freedom of the press, then the right to public demonstrations and, finally, the right to free elections."

Admittedly, the Chinese enjoy more freedoms these days than they did during Mao's times -- they are now allowed to complain about the government in private, for example. They're also now allowed to travel abroad and determine for themselves where they live and what career they want to pursue.

But those, like Jiang, who push the envelope and run afoul of Beijing risk losing those limited freedoms. "Tens of thousands of people are still being jailed" because of their beliefs or political convictions, and they are "in serious danger of being abused or tortured," Amnesty International warns.

According to its official policies, China practices "socialist Democracy." But what does that really mean? Workers and farmers don't have the right to establish independent labor unions or organizations. Police are allowed to detain people at will and detentions can be extended for years without a court ruling or even legal representation. 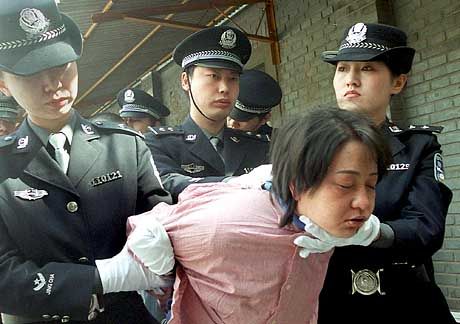 A woman prisoner being taken for her execution after she was sentenced to death at a sentencing rally in Beijing.

Courts often impose death sentences in lightening-quick trials -- especially if the government is running a new anti-crime campaign. But the exact number, of course, remains a state secret. What is known, however, is that China's executioners kill more convicts than any other country in the world -- estimates put the figure at up to 10,000 a year.

Yet despite the threat of the ultimate punishment handing over criminals and dissidents alike, the party has recently been faced with an increasingly active and courageous population. "Give me back my rights," someone recently wrote on a Chinese lantern at the gate to the government compound Zhongnanhai in Beijing, for example -- an action unheard of only a few years ago. October and November saw a series of sometimes violent demonstrations across the country as farmers protested everything from dam construction to poor living conditions.

An initiative created by apartment owners in Beijing's Wangjing quarter, who have been battling forced displacement for the development of a green space, organized media support for their cause (including foreign correspondents), distributed flyers, held public demonstrations in their neighborhood and even organized a nighttime procession of cars through Tiananmen Square and Zhongnanhai.

Because of their rebellion, the apartment owners were able to get a court to take on their issue -- something that is far from normality in China. Still, the court permitted the controversial construction to proceed, but they did reduce its size and moved it a little farther away. The owners have filed an appeal. In a separate development, residents in the city's Chaoyang neighborhood recently chained themselves to trees in order to prevent the construction of a new 29-story skyscraper in a park.

And recently, a growing number of Chinese have travelled from their home provinces to Beijing in order to demand justice from federal authorities. They feel they are treated badly by their local courts, authorities, employers, functionaries and even business partners -- often because they've been driven off their land in order to accommodate new factories and the construction of gentrified neighborhoods packed with villas for China's new elite. The government has even set up a new registration office where they can lodge complaints.

But the country's petition system -- which was originally planned with good intentions -- has long become part of the state repression: Police in Beijing often lock up petitioners. In other cases, authorities from the province travel to Beijing, take the petitioners into custody, and force them to go back home. Unfortunately, that's not always the end of the story. "They're arrested, beat, tortured and some wind up in psychiatric wards or labor camps," a Beijing human rights activist who advises petitioners says.

Chinese newspapers have more freedom to report scandals these days -- but if they cross paths with the government in Beijing, they risk getting banned.

At times, the Chinese press is allowed to take up particularly sensational cases. Issues that were once taboo or appeared, at best, in the classified reports of high party functionaries are now splashed across the front pages of newspapers -- serious accidents, environmental scandals, cases of corruption and even demonstrations. But it is still prohibited for journalists to shake the foundations of the single party leadership, to criticize Communist Party mandarins or to question government policies. Some courageous journalists have shown a repeated willingness to push it, but in doing so they risk getting fired or having their newspaper banned.

The rise of civil society?

In addition to the increasing willingness to cross the party, more and more "non-governmental organizations" are also establishing themselves in China. Despite lacking complete independence -- the government requires that some be linked to an official authority while others are forced to register as businesses -- it is a step forward for the country. The NGOs exist in a sort of interzone between independence and state control -- at times their orders come directly from the government, at others they are used for government interests.

But -- especially if it's convenient for the government -- the NGOs are sometimes allowed to conduct campaigns. This summer, for example, environmental groups were allowed to campaign for the air-conditioning systems in public buildings and hotels to be set at 26 degrees Celcius in order to save valuable energy.

But citizens' initiatives aren't the only thing you will find behind the term NGO in China -- you can also find propaganda organizations like the "Chinese Society for Human Rights Studies." The body publishes what it calls "China's first magazine for human rights." The goal of the glossy magazine is to bring readers closer to the party's official position: There are greater priorities in life than democratic rights like elections and freedom of organization or opinion in a country as big as China, is one typical message. Those other priorities? The right to life, stability, an apartment and an education.

Like a mantra, the magazine keeps repeating over and over again lines like these: "In China, workers' rights are protected, the handicapped are cared for, prisoners are treated with more decency than they were during the times of the British and Japanese colonial powers in China. And the Tibetans are doing better than they ever have before!" You won't find any dissenting viewpoints in the magazine.

The only true NGOs in the country deal with tragic but also fairly innocuous issues -- like autistic children, giving micro-credit to impoverished farmers or collecting donations for neglected village schools. In Beijing, college students teach the children of migrant workers who can't afford the tuition at state schools. There's also the group linked to former astrophysical student Li Dan, 26, that founded a school for the orphans of AIDS victims in the province of Henan.

Continue to part two: Fighting from within the system

Many Chinese lawyers are no longer willing to accept the fact that courts rule in favor of the powerful or big business and against rebellious journalists, poor farmers, fired workers and citizens whose property has been expropriated from them. In many cases, they are fighting back against the government. But sometimes they, too, fall into the claws of the Communist apparatus. Take, for example, the case of Zheng Enchong, an attorney who defended owners whose apartments had been torn down. A court convicted Enchong on charges that he committed treason by betraying state secrets and sentenced him to three years in prison after he made public statements about a property scandal.

Zhang Xingshio, 37, is also an attorney who has rebelled against the government. In a building next to the National Library he set up his Beijing Kingdom Law Office. The office is full of knickknacks. A certificate of the US National Association of Criminal Defense Lawyers hangs on the wall next to the traditional scroll painting. Among other places, Zhang studied in Philadelphia.

A bald-headed farmer from the eastern province of Anhui is waiting in the hall. He's waiting for a consultation. His agricultural insurance covered the last bad crop, but he has only received part of the claim settlement he is due. Now he and his neighbors suspect that local officials are embezzling the missing money.

"We concentrate on the weaknesses and on cases in which human rights have been violated," Zhang says. In Shenzhen in southern China, he and his colleagues are defending, for example, two managers of the Nanfang Media Group, who have been accused of embezzling government funds.

The attorneys suspect that behind the trial there's an intrigue involving a conservative official who is seeking to bring the exposé-loving media company back into line. Zhang and his colleagues have already succeeded in getting one of the accused in the case released.

Zhang's office also serves as the office for the Open Constitution Initiative, a small NGO. Through the organization, Zhang is seeking no less than the reform of the Chinese legal system. "We want a constitutional state built on the principles of a republic," he says.

Recently, OCI proposed the elimination of the so-called administrative arrest, which grants police the right to arrest people, deny them legal representation or a trial and put them in work or re-education camps. "Our petition was rejected," Zhang says laconically.

But 30 lawyers and law professors are now mounting an even more courageous initiative: They're reformulating the Chinese constitution and they are planning to send it to the National People's Congress in Beijing. "The constitution already establishes human rights," Zhang says, "but we want to flesh out the details."

The applicants argue that things like equality under law, the right to information, independent courts, freedom of expression, freedom of information and the right to organize are inalienable. Yet Zhang does not see himself as an opponent of the government. "We operate within the system," he says. "We're not dissidents." Yet he does concede: "We're moving along the border between party and opposition."

The OCI members believe they are being observed by the state security apparatus and that their phone lines are being tapped. Nevertheless, the group has pulled off one masterstroke -- they recently ran an ad in a newspaper for railway passengers. Since then, at least, the passengers on the national railway know that OCI "offers legal aid for people who have been unfairly treated" and that it can be found under the Web site www.oci.org.cn. Of course, the country's Internet police have since blocked the site.