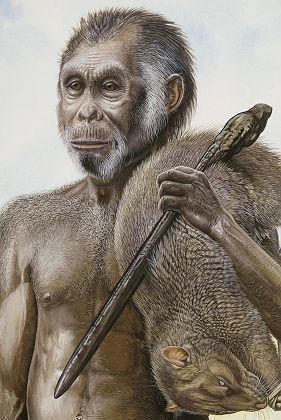 An artist's impression of Homo floresiensis, the "hobbit."

The little hobbit was ill, very ill -- possibly even paralyzed. His legs were deformed, and he could hardly move his arms. His teeth were set crookedly in his jaw, and his face was a chinless, slanted mug.

Nothing is left of the 18,000-year-old little Stone Age man except his bones -- but scientists have measured his weathered skeleton and deduced from the relevant interspaces, diameters and thicknesses that this must have been a severely handicapped specimen of Homo sapiens. That, in any case, is how he's described in a study penned by a team of experts associated with Indonesian anthropologist Teuku Jacob, of the University of Gadjah Mada in Yogyakarta. The study was published in the August 2006 issue of the Proceedings of the National Academy of Sciences.

"Complete nonsense," says Peter Brown, a paleoanthropologist at the University of New England in Armidale, Australia. He, his colleague Michael Morwood and their team were the ones who scratched the contentious skeleton -- item LB1 -- from layers of geological sediment three years ago -- in Liang Bua Cave on the Indonesian island of Flores.

The same bones that Jacob and his team base their arguments on led Brown and Morwood to imagine a very different man. Brown and Morwood thought they had discovered a new human species. They called the creature "Homo floriensis," a midget who used his long arms to fashion tools out of stone and grilled meat over the fire -- barbeques that included giant rats, or steaks cut from a slain Stegodon, the ancestor of today's elephant.

The scientists went on to dig up the bones of eight other midgets in Liang Bua -- although they didn't discover any more skulls. The youngest of the little men roamed the woods of Flores only 12,000 years ago.

Scientists celebrated the find as "one of the most significant paleoanthropological discoveries of the last half century." The dwarf seemed to be the only relative of modern man who managed to co-exist with his more successful cousin for as long a time.

The international public was fascinated, and commentators gave free rein to their imagination. Ingenious knights of the pen were quick to find a name for the creature: They dubbed it the "hobbit" -- after the grumpy little man from Middle Earth, the imaginary world invented by novelist J.R.R. Tolkien in the "Lord of the Rings."

But just as quickly, critics began to flock to Jacob's camp -- they insist that LB1 may be a little short, but that he is otherwise just a straightforward Homo sapien.

The anthropologists haven't stopped bickering since. They're squabbling "like fifth graders," according to Time magazine. Britain's Independent newspaper has spoken about "scientists at war."

The opposed camps are accusing each other of having stolen or damaged bones. There's been talk of surreptitiously replaced hip bones and "scientific colonialism." The scientists from Java feel they're being duped by their colleagues from Australia and the United States.

The publication of the research results obtained by Jacob and his colleagues heralds the next round of this big squabble over the little prehistoric man. The Australian-US team is already at work on its own study, intended to refute Jacob's hypotheses.

The Journal of Human Evolution has just published a paper by anthropologist Debbie Argue from Canberra, a scientist who has measured the bones of more than 500 women and men, including many African pygmies. When she compared these measurements to those of the midget from Liang Bua, she concluded that LB1's measurements lie far outside the spectrum proper to Homo sapiens, including the pygmies.

A product of the imagination?

Jacob and his researchers, on the other hand, are comparing the hobbit's skeleton to the measurements of the dwarf-like men who still live in the woods of Flores today. The result: The prehistoric man from Liang Bua could well have been one of these Indonesian pygmies. Homo floriensis really is just like Tolkien's hobbit -- a "product of somebody's imagination," quips anthropologist Alan Thorne, a co-author of the Jacob study and prominent critic of Morwood and Brown. 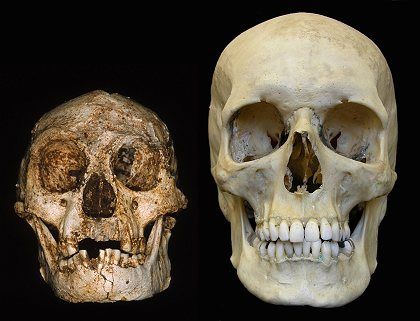 A brain the size of an orange: Was the "hobbit" merely a deformed human?

The only riddle for those arguing on behalf of the Homo sapien faction was LB1's brain. The size of an orange, it's much too small to be that of a pygmy. So the midget must have suffered from microcephaly -- underdevelopment of the skull -- Jacob and his colleagues believe.

This medical condition is often associated with deformed limbs and severe physical handicaps. So the scientists interpret the skeleton's oddities not as the specific characteristics of a new species of humans, but as typical symptoms of microcephaly.

These are Jacob's main arguments against the hypothesis that the discovery on Flores Island proves the existence of a distinct human species, Homo floriensis:

"Rubbish," replies Brown, insisting on the hobbit-hypothesis. He believes the species probably developed relatively easily on the island: With its surface area of 14,200 square kilometres (5,483 square miles), Flores is a "relatively large island."

"We need another skull."

From an evolutionary perspective, Jacob's argument does in fact seem a bit shaky. It's in fact quite possible that prehistoric humans came to the island from time to time. A new species can very well develop without any eternal geographic separation.

And what about the little man's slanted face? All Brown can see is "minor asymmetry." What's more, the deformed shape of the skull is easily explained: "After all, the skeleton was buried under six meters (20 feet) of sediment," Brown says.

And Bill Jungers, a morphologist at Stony Brook University in New York, says the bone walls aren't so thin either. He examined LB1 in Jakarta last year and concluded that the skeleton displays "no trace of disease." What's more, the size and strength of the muscles can't be deduced with any degree of certainty by looking at the bones, Jungers says.

Which leaves the shrunken head. Anthropologist Dean Falk of Florida State University has compared the endocasts of 10 microcephaly victims from different regions of the world with that of the hobbit. "The shapes of their brains have features in common that strongly distinguish them from LB1," she concludes.

Now German neuroscientist Jochen Weber of the Leopoldina Hospital in Schweinfurt has joined forces with two anthropologists from Tübingen University in order to test the hobbit brain for microcephaly. Their research was conducted independently of the ongoing Indonesian-Australian trench fighting. The German scientists have compared the endocasts of 27 microcephaly victims with the Flores midget's head. "LB1 is right in the middle," Weber says. "We can't rule out the possibility that he suffered from microcephaly."

How can it be that staid scientists working on the basis of the same measurements reach diametrically opposed conclusions? Who's right? There is a depressing sense in which the little man from Flores is revealing the truth about the paleoanthropologists: It seems as if his bones can provide evidence for whatever hypothesis promises research funds, fame -- or both.

"We need another skull from one of the Flores men," neurosurgeon Weber says matter-of-factly. "Otherwise this debate will never end."