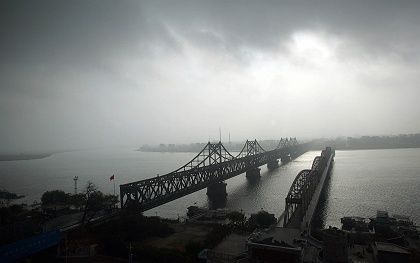 The Friendship Bridge linking North Korea with China. The relationship may now have soured.

SPIEGEL: Officially relations between China and North Korea are described as as close as lips and teeth. Has the nuclear weapons test put an end to that?

Yan: China and North Korea are no longer close allies.

SPIEGEL: How is the relationship now?

SPIEGEL: Chinas attempts to prevent Kim Jong Il from building the bomb have been in vain. What went wrong?

Yan: The Americans committed a grave mistake when they levied sanctions against North Korea and when they excluded the country from the international banking system. They also refused to rule out an attack on North Korea and did not grant Pyongyang a security guarantee. China also failed to provide North Korea with any guarantee that in the case of an attack it would be protected by Chinese atomic weapons. Which is why Kim Jong Il tested the bomb.

SPIEGEL: Did Beijing fail to exert enough pressure to dissuade him from going ahead with the test?

Yan: China pursued the correct policy by taking part in the six-party talks dealing with the North Korean atomic program, along with North Korea, South Korea, Japan, the US and Russia. Unfortunately though, Beijing didnt make enough of an effort to keep the talks going; they have been suspended for a year now. If the six-party talks had continued, maybe twice a year for example, North Korea wouldnt have gone ahead with the test.

SPIEGEL: What will be the consequences for Asia of a nuclear-armed North Korea?

Yan: To avoid a nuclear domino effect in northeastern Asia, it is crucial that China and the US work together intensively on this issue. It is even more important right now to prevent North Korea from testing a second bomb. As we heard, the first test wasnt so successful. So right now we must give the North Koreans the message: Dont run another test.

SPIEGEL: What can Beijing or Washington offer as an incentive?

Yan: If the US lifted sanctions or declared itself ready to engage in bilateral dialogue, then that would prevent North Korea from conducting another test. At the moment though the Americans will not yield. They want to save face and dont want to bow under pressure.

SPIEGEL: Could Kims regime collapse under the pressure of international sanctions?

Yan: No. I dont think so. People have been talking about a collapse for over 15 years. There is no sign of a quick breakup.