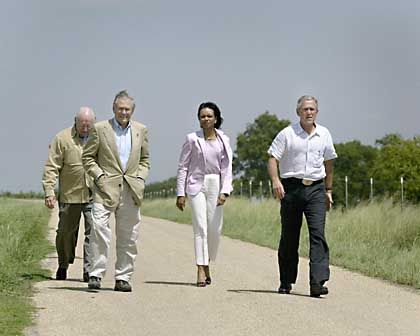 The Bush Administration has lost its ethical compass, says Wilkerson.

Colonel Wilkerson, hardly an insider of the Bush Administration has ever criticized it as sharply as you are now. Why?

Wilkerson: The straw that broke the camel's back, what made me finally decide to go public, was the issue of departure from the Geneva Conventions. It was the departure from international law and treaty with regard to what I perceive to be a policy that permeated the leadership from the Vice President through the Defense Department and out to the military forces in the field. In my view, it was not only damaging to the armed forces -- and I was a member of the Army for 31 years -- but also damaging ultimately to America's image and credibility in the world and damaging to our capability to win this conflict against Osama Bin Laden and Abu Musab al Zarqawi and others like them. You can't win what essentially is a war of ideas by departing from your own ideas.

SPIEGEL: How has it come to this?

Wilkerson: What I saw from my perspective at the State Department was essentially involvement in what I prefer to refer to as the statutory process. The President gets advice from every side and ultimately goes away and makes his decision. What I saw was the President making a decision that appeared to be a compromise. He said it was indeed a new enemy and perhaps Geneva did not pertain. But at the same time he said very clearly in the same memorandum, which I saw, that all detainees should be treated in accordance with American values and the spirit of Geneva.

SPIEGEL: So what went wrong?

Wilkerson: In execution of that decision the other side won, the side who thought that terrorists are the new beast, and they had to be dealt with differently. That happened because this is the most powerful vice president in the history of the United States, and he wanted it to happen. It was a secretive little known cabal, led by Cheney and Defense Secretary (Donald) Rumsfeld who short-cut the statutory process. In the case of Geneva they thought there were no holds barred, that the demand for intelligence was so great that there was enormous flexibility in how you interrogated prisoners. And I saw that go all the way down to the lowest level of the armed forces. And when you put those two pressures together, the demand for intelligence and the implicit fact that this isn't the old ball game, then you have opened Pandora's Box. You contaminate the armed forces and you can expect to have things like Abu Ghraib and deaths.

SPIEGEL: How many people have died in American detention?

Wilkerson: When I left the State Department, there were over 70 deaths of people in detention, some of them being investigated, some of them covered up.

SPIEGEL: Is the CIA torturing people?

Wilkerson: I don't know. If the President signed a presidential finding and authorized a certain select group of the CIA, highly trained, to do other than Geneva-type interrogation-techniques, only a very few people will know. I'm not even sure the Secretary of State would know about it.

SPIEGEL: You prepared Colin Powells now famous speech for the Security Council in which he blamed Iraq for having weapons of mass destruction and connections to al-Qaida. Was this claim a lie to generate support for the war, as some democrats now allege? 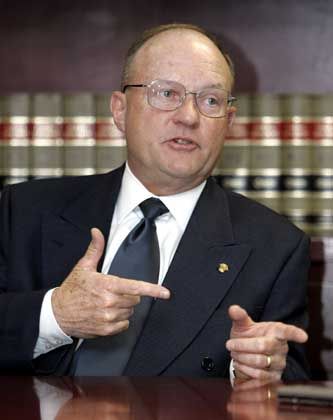 Wilkerson: I don't know. I wish I did. I was the task force leader at the CIA, putting together Powells presentation. I was housed there for five or six days and nights. Today, I know that the Germans warned about the credibility of their agent "Curveball", who stated that Iraq has mobile production units for biological weapons. Why wasn't I told? Why wasn't the secretary of state told? We used the information from the al-Qaida member Ibn al-Shaykh al-Libbi who claimed that Iraq was training the jihadis in chemical and biological weaponry. Now he has recanted. We are hearing that his confessions were obtained under less than Geneva methods - waterboarding for example.

SPIEGEL: The administration was also choosing the facts that best illustrated the supposed dangers presented by Iraq and overselling the case for war, isn't that right?

Wilkerson: That is true, at least with regard to Douglas Feith, then the number three in the Pentagon. And there is no question that the vice president overstated the case. I mean, all you have to do is run his tapes. By the way, they tried to get the alleged Prague meeting between Mohammed Atta and Iraq Intelligence officials -- which was discounted by almost everyone -- into the presentation. But we refused.

SPIEGEL: Colin Powell recently said this is a blow to his reputation ...

Wilkerson: ... I call it the low point in my professional career. I mean, I look back on it, and I rack my brain again. I wasn't a novice. I had been an intelligence user for years. How did we get so fooled?

SPIEGEL: Have you been able to find an answer?

Wilkerson: Saddam Hussein was not as dumb as we thought. He actually was a very smart man. He knew his principal enemy was Iran; his second most threatening enemy was his own people. And somewhere in there was the US, but way down at the bottom. And the only way he could maintain the brusque 'I'll knock you out if you try to hit me' attitude that he did was to maintain the myth that he had WMDs. And so he managed to conduct a disinformation campaign.

SPIEGEL: Shouldn't then National Security Adviser Condoleezza Rice have ensured that President Bush was better advised than he proved to be?

Wilkerson: There was a single word used by countless people in the government to describe the National Security Council under Dr. Rice and that is "dysfunctional." And if you think about it for a moment, this dysfunctionality of the statutory process was a nice camouflage for the alternative decision-making process that revolved around the vice president.

SPIEGEL: Rice had the president's trust and seemed focused on becoming ever closer to him.

Wilkerson: It worked. She had her eye on the prize. And finally she became secretary of state.

SPIEGEL: The Pentagon always claimed that a stable government could be installed in Iraq within a matter of months. Was there a climate of arrogance?

Wilkerson: Yes there was. Incredible arrogance. I call it the administration of hubris. How could anyone look at that region and believe it? As opposed to the Pentagon, we in the state department never signed up to that idea that our troops would be greeted with flowers. There were so many mistakes from the very outset of the administration -- beginning with sticking our finger in the world's eyes with our rejection of Kyoto without offering an explanation. The gracelessness, the ineptitude of how we confronted the world made foreign policy and international relations in general very difficult in the first Bush term.

SPIEGEL: Now, though, the mood has changed dramatically and the American public is no longer supportive of Bush's Iraq policies. Should the US troops be pulled out of Iraq?

Wilkerson: There are two dimensions to that. First, because Secretary Rumsfeld made the decision not to enlarge the army two years ago, it's inevitable that they'll be pulled out. Otherwise we will break our Army and Marine Corps, sometime in 2006, or 2007. That's the reality. The second and far more important dimension is the situation in Iraq. We now have to finish the job, otherwise we will, at a minimum, have a civil war and the whole Middle East would be in danger; I could see a tragedy of monumental proportions developing. So I agree 100 percent with the President that we have to stay until we get it right - and I hope that can be done in the one to two years we have before we destroy the Army and the Marine Corps.

SPIEGEL: There is a proposal from the Democrats whereby the President should acknowledge the mistakes that have been made and then ask the country and the world for renewed support.

Wilkerson: I think many Americans, including myself, would be encouraged by some admission of fault and some change. But I don't think it's in this president's disposition and character to do that. 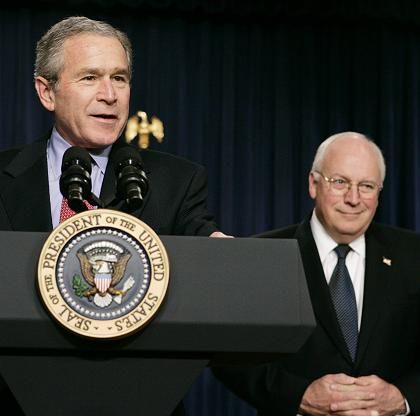 US President Bush and Vice President Cheney. "Saddam Hussein was not as dumb as we thought."

Wilkerson: Yes. Recently I had occasion to be on a panel with a former prime minister of Canada who said, 'It's not so much that we Canadians are anti-American, it's that we are very, very worried about a headless giant.' And that stuck with me because that is an apt metaphor in some cases for this superpower right now. It seems leaderless. It seems directionless.

SPIEGEL: Are there not indications of a more measured foreign policy now emerging?

Wilkerson: I hope so. There have been some changes, and I'm encouraged by them. Dr. Rice is doing some things that would indicate to me that she has learned and that she is working now off a sheet of music that sounds pretty sweet to our allies and friends. That's wonderful. But I still detect, especially from the vice president, a note of unbridled unilateralism that concerns me: the willingness to go it alone, damn the torpedoes, full speed ahead, we're the big guy on the block, to hell with you. I mean that sort of attitude is out of place in the 21st century.

SPIEGEL: Haven't the neo-conservatives and their policies failed?

Wilkerson: They are not neo-cons. They are not new conservatives. They're Jacobins. Their predecessor is French Revolution leader Maximilien Robespierre. And to say that these people are dead, dormant or lying quiescent is not encouraging because there are enough of them left. And it's going to be incumbent on the rest of us, in this country at least, to watch these trends and make sure that their ugly head doesn't rise up and cause more problems in the future.