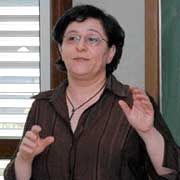 Mina Ahadi has received death threats after founding the group.

An Iranian human rights activist living in Germany has formed a "Central Council of ex-Muslims in Germany" with 40 others and has received anonymous death threats after declaring she wants to help people to leave the religion if they so desire.

Iranian-born Mina Ahadi, 50, said she set up the group to highlight the difficulties of renouncing the Islamic faith which she believes to be misogynist. She wants the group to form a counterweight to Muslim organisations that she says don't adequately represent Germany's secular-minded Muslim immigrants.

Ahadi has been put under police protection in recent days. Renouncing Islam can carry the death penalty in a number of countries including Iran, Saudi-Arabia, Afghanistan, Pakistan, Sudan and Mauritania. In other countries people who turn their backs on the faith aren't punished by courts, but they are often ostracized by family and friends. It's a difficult subject among Muslim communities in Europe too.

Ahadi said she wants the new organization to help women who feel oppressed by the rules of the faith to find a way out. The Council will hold a news conference in Berlin on Wednesday to outline its goals.

SPIEGEL: Together with 29 other immigrants from Muslim countries you have declared that you have renounced Islam. The campaign is similar to one launched in the 1970s by women who declared publicly that they had had abortions. What is your purpose?

Ahadi: I haven't been a Muslim for 30 years. I'm also critical of Islam in Germany and of the way the German government deals with the issue of Islam. Many Muslim organisations like the Central Council of Muslims in Germany (ZMD) or Milli Görüs engage in politics or interfere in people's everyday lives. They were invited to the conference on Islam (hosted by the government in Berlin last year). But their aims are hostile to women and to people in general."

Ahadi: They want to force women to wear the headscarf. They promote a climate in which girls aren't allowed to have boyfriends or go to discos and in which homosexuality is demonized. I know Islam and for me it means death and pain.

SPIEGEL: What will your organization do?

Ahadi: One example: One representative of the Central Council of Muslims in Germany said that a carnival procession float (during the recent carnival in Germany) showing Islamists with explosive belts had offended Muslims. But there was no evidence of that. The associations pretend that they represent everyone and to some extent are acknowledged as such by the German side. That's bad. We have to give a signal against that and say: Not in our name. We are secular humanists. We want to give these people a voice. Someone has to make a start. We're advocating human rights.

SPIEGEL: Some of your members are also active in communist organizations in their home countries.

Ahadi: Yes, many were active in left-wing groups. We have received more than 100 membership applications in recent days. We want to create a new movement, in other European countries too. We hope that soon there will be 10,000 of us representing many more people.

Ahadi: I don't think it's possible to modernize Islam. We want to form a counterweight to the Muslim organisations. The fact that we're doing this under police protection shows how necessary our initiative is.