Editor's Note: The following text is an excerpt from author Günter Grass's interview last week with Ulrich Wickert, host of a nightly news magazine on Germany's ARD television network, in which Grass discussed his youth and his recent disclosure that he was a member of the Waffen-SS. 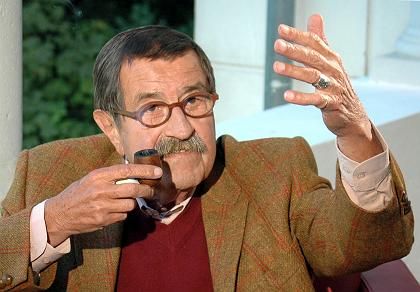 Günter Grass: "Those who wish to judge me should judge me."

Wickert: We are sitting here in a hotel in Denmark, the country where Günter Grass wrote the first draft of his autobiography. The author has come under fire for having disclosed for the first time, in his new book, the fact that he was a member of the Waffen-SS near the end of World War II. Welcome, Mr. Grass! Why now and why not earlier?

Grass: I had suppressed it. I can't really give you the precise reasons myself. It was always on my mind, and I believed that what I was doing as a writer and as a citizen of this country, things that meant precisely the opposite of the ideas that had shaped me in my younger years, during the Nazi period, that that was sufficient. And I didn't feel any guilt. I was assigned to the Waffen-SS but was never involved in any crime. Besides, I always felt the need to write about my experiences in a larger context one day. This has only developed recently, now that I have overcome my inner aversion to writing an autobiography in the first place, specifically one having to do with my younger years. It covers the period from my twelfth to my thirtieth years of life. It was within this larger context that I felt I could speak openly about it.

Wickert: Now you are facing substantial criticism. The president of the Central Council of Jews, Ms. (Charlotte) Knobloch, has said that this confession renders your earlier speeches invalid. And, of course, there is the matter of the speech you gave in Bitburg, where you sharply criticized (then) Chancellor (Helmut) Kohl and (then) US President (Ronald) Reagan for visiting a cemetery where members of the Waffen-SS were also buried.

Grass: What outraged me about that visit was the idea of taking advantage of the dead. It felt like propaganda, and that was what prompted my criticism. Ms. Knobloch has every right to comment as she wishes. And I don't mean to question those who criticize me for not having publicly disclosed this information until now. But I also have every right to explain the circumstances that led to my doing what I did, even though they may be inadequate for some. By the way, I can only hope that Ms. Knobloch finds the time to read my book, because although this played a role within the period of time I describe -- my younger years -- I address the far more critical issues in an entirely different context. One is the fact that, in my blindness as a member of the Jungvolk (German Youth) and Hitler Youth, I didn't ask questions, didn't ask the right questions of those who were close to me, my family, for example

I had an uncle who was a postal official at the Polish post office in Gdansk. He was one of the defenders of the Polish postal service and, after it capitulated, was shot by the Germans under the provisions of martial law. Suddenly he was no longer a member of the family, and we were no longer allowed to play with his children. My parents certainly took an opportunist approach to that situation, and I didn't ask any questions. These are the things that really interested me, far more so than what I got myself into -- unintentionally, by the way -- with the Waffen-SS. The real issue that this raises, and this is what I tried to do in my book, and it isn't easy, is the idea of bringing back memories of this 12, 13, 14, 15 and 16-year-old boy, whose behavior has in many ways become foreign to me We know that memory sugarcoats, dramatizes and paints too rosy a picture of what really happened that it enables us to tie things together that have become murky in our memories, so that we can assemble the details to form anecdotes. I had all of these reservations when I began writing, and I took them into account during the writing process

Wickert: I found a very important speech in your collected works, the "Speech of Habituation," which you gave in Israel in 1967. In the speech, you write that you never concealed the fact that you were a member of the Hitler Youth at 14, that you enlisted at 16 and were already a prisoner of war by the time you were 17. Couldn't you have mentioned, back then, that you were a soldier in the Waffen-SS?

Grass: Yes, I could have mentioned it. I mean, it's easy to say that now, and I ask myself the same question. I discussed this in my book, including my silence on the issue. The book is now available, so readers can form their own opinions. This is why, in the current situation, I can only direct readers to my book.

Wickert: You say that nothing could lighten the burden of your memories. You could have lightened it by coming clean on this earlier!

Grass: Yes, and that's what I've done now in writing this book. Some would say it's too late or very late. I haven't been able to do this until now, and those who wish to judge me should judge me. But what I am experiencing now, currently, this is supposed to make me an unperson and call everything into question after the fact, everything that made my subsequent life what it was, a life that was also characterized by a sense of shame and by an ongoing attempt that still continues today.

Wickert: Could this also have motivated you to write about certain topics, this taboo that was constantly at the back of your mind?

Grass: Yes, of course! Well, alright, I don't know whether I needed additional motivation in this respect, but it certainly encouraged me

Wickert: When the philosopher Karl Jasper examined the issue of guilt in 1946, he concluded that there is no such thing as collective German guilt, but rather the individual guilt of the perpetrators. Do you feel guilty? Did you do anything that would justify your feeling guilty?

Grass: Well, if we're talking about verifiable crimes, nothing of that nature happened. But I prefer not to treat this as an achievement. If I had been two or three years older and had been involved in crimes, not only those committed by the Waffen-SS, but also, as we now know, by other groups within the armed forces, such as the shooting of prisoners, no one could have guaranteed anything. In any event, I couldn't have done it ...

Wickert: Later in life, you defended (novelist) Christa Wolf when she was accused of having been involved with the (East German secret police, the) Stasi. You defended (writer) Walter Jens for his past involvement in the Nazi party. Were you thinking about your own youth?

Grass: I have a problem with these kinds of sweeping statements. Everyone is born into a certain era. I wouldn't want to see anyone faced with the circumstances that prevailed at the time, when there were few or no alternatives. Unless, of course, one was raised in the sort of family -- of which, thank God, there were at least a few back then -- in which the parents stood their ground

Wickert: You experienced a horrible situation in 1967, during a reading of "Örtlich betäubt" ("Local Anesthetic") at a church conference. A man walked onto the stage, said he wanted to be provocative, greeted his comrades from the SS, swallowed a cyanide capsule and died. What were you thinking at the time?

Grass: It was a shocking incident. When I visited the Scheub family a few weeks later and spoke with his widow and children, I learned more about this man, who was completely torn. On the one hand, he was still caught up in these Nazi ideas that had shaped him. But at the same time, he considered himself a pacifist as a result of his wartime experiences, and he helped his two older sons, who both wanted to be conscientious objectors, to write their statements. A strange man. A daughter of Scheub's has just published a book in which she quotes the passages I wrote about this incident in "Diary of a Snail," because the matter affected me deeply.

Wickert: Wouldn't it have been a relief for you to be able to write about your own, similar experiences?

Grass: It's difficult to say in retrospect. I didn't do it, and I'll just have to stand by that -- and I'll certainly be listening to these accusations for a long time to come. All I can say about the issue is that it's a topic in this book. I spent three years working on it, and I've written everything I have to say about it, and anything I say now, essentially after the fact, is only by way of explanation as it relates to the book.

Wickert: The words "guilt," "burden" and "fear" appear repeatedly in the book, and you question yourself in the book, where you write, for example: "The minute I invoke the thirteen-year-old boy I was at the time, take him to task and feel tempted to judge him, he eludes me. He doesn't want to be evaluated or judged. He flees to his mother's lap and says: "I was only a boy, just a boy." Does this reveal the motif of Oskar (in the novel "The Tin Drum"), who says: "I am not responsible for the things I did as a child?"

Grass: That's certainly part of it. But it's also true that I must place certain restrictions on myself. I catch myself judging myself as that 13-year-old boy, who, of course, rightfully points out that he is only a child. And my membership -- well, I was drafted into the Waffen-SS and didn't exactly volunteer, which was just as idiotic. I wanted to be on the submarines and then ended up with the Waffen-SS.

Wickert: Why did you volunteer? Did you want to be a hero?

Grass: That may have been part of it, but it was also the lack of space at home in my parents' apartment. As was the case with many who grew up in such tight quarters in those days, making it to the front, becoming a soldier was liberating in a sense, liberation from this deadly misunderstanding ...