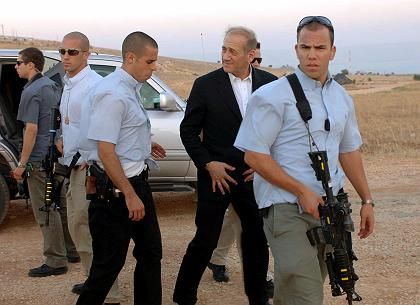 Israeli Prime Minister Ehud Olmert accompanied by bodyguards: "We will win at the end."

Shalev: The cause of the war was a just one, but the conduct has not been. And by this I do not just mean the tragedy of Qana, but also what already happened in the first days: Attacking Beirut like this, killing civilians in Lebanon. From the very first day we should have limited ourselves to attacks against the Hezbollah strongholds along the Israeli-Lebanese border.

SPIEGEL: Why havent limitations been placed on the scope of the attacks?

Shalev: You could feel a high level of testosterone, of hormones that shouldnt be there in such a situation. (Hezbollah leader) Sheikh Hassan Nasrallah drives everybody crazy in Israel. He sits there with this very calm voice. He is never angry, he doesnt curse, in a way he even looks gentle. For that, our political leaders and the military wanted to take revenge.

SPIEGEL: The Israeli government considers its behavior to be morally correct because they have, after all, forwarned the Lebanese population about the bombardments.

Shalev: Even if they warn the people, many people are not able to leave their towns, especially since roads, bridges, ports and the airport have been destroyed. But it is not only a question of morality. These Lebanese are going to be our neighbors forever, but many people are now against Israel. These citizens would support us if we had conducted our fight with the Hezbollah in a more measured way.

SPIEGEL: Many Israelis say: The Arabs hate us anyway.

Shalev: Many Lebanese people were against the Hezbollah. It is a danger to the their whole country, especially in a city like Beirut which is very open and liberal. Because the fundamentalists one day will try to forbid this Western way of life. At the beginning of the war you could see from the declarations of various Lebanese leaders that even they were quite satisfied that Israel took care of the Hezbollah. But we went into Lebanon like angry bulls into the arena, attacking anything that moved.

SPIEGEL: Prime Minister Ehud Olmert told the members of the Knesset: "Save your criticism for the time after the war." But is it unpatriotic to voice criticism while Israeli soldiers are dying?

Shalev: Jewish history has been filled with very critical people. In fact, it was those who were against the consensus of their time who lengthened the history and the life expectancy of the Jewish people. Take Moses, for example. He took the slaves from Egypt into the desert almost against their will.

SPIEGEL: Dont you fear that criticism of this kind could help the enemy?

Shalev: In a true democracy, a leader with enough self-assurance does not talk the way Olmert does. One would, of course, be a traitor if he called Nasrallah and told him where our planes are getting ready to attack. But of course you can criticize the head of the government.

SPIEGEL: Olmerts speeches have been received very positively by the Israeli public.

Shalev: I dont like them. They are schmaltzy. It is this American way of schmaltz when you mention the first name of the victims and you show some kind of phony familiarity. I don't like this ritual of putting on your Kippa when you are reading a verse from the Bible. You either wear the Kippa the whole time or you read from the Bible without it. It is just ridiculous.

SPIEGEL: Do you think Israel can win the war?

Shalev: Olmert should have defined the objectives of the war from the beginning. But all he said was: "We will be victorious" without defining what victory means. Also with defense minister Amir Peretz we cannot win. He said, with great overestimation of his capacities: "Nasrallah will not forget the name Peretz." Olmert and Peretz behave like two bullies in a pub.

SPIEGEL: The announced goal is the destruction of the Hezbollah.

Shalev: What does this mean? Is it getting all of them to crawl on their hands and knees and hand over their weapons? We do not deal with a state which will surrender in an official ceremony. In medicine you have something called "pain management." You don't totally eliminate the pain. You try to manage it in a way so that patients can live with it. This is what we have to do with the Hezbollah. We have to weaken them, destroy their first lines. But militarily, it is not within Israels ability to solve all of our problems. Our strength is the democratic character of our society which Nasrallah fully underestimates. We lost, when Olmert said, we will win. Despite that, we will win at the end, because the Israeli society is smarter than its political leaders.