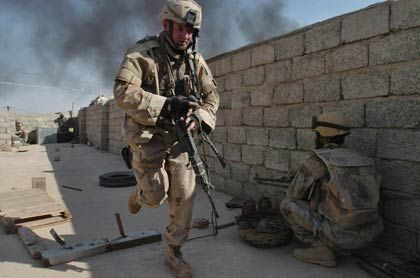 Escalating costs of war: A U.S. soldier runs for cover in the northern Iraq town of Tal Afar, September 2005.

SPIEGEL: Professor Stiglitz, at the beginning of the Iraq war, the United States administration was hoping to almost break even in terms of the costs ...

Stiglitz: ... they truly believed the Iraqi people could use their oil revenues to pay for reconstruction.

SPIEGEL: And now you are estimating the cost of war at levels between $1 trillion and $2 trillion. How do you explain this difference?

Stiglitz: First, the war was much more difficult than President Bush and his government expected. They thought they were going to walk in, everybody would say thank you, and they would set up a democratic government and leave. Now that this war is lasting so much longer, they constantly have to adapt their budget. It rose from $50 billion to $250 billion. Today, the Congressional Budget Office talks about $500 billion or more for this adventure.

SPIEGEL: Thats still by far lower than your own calculations.

SPIEGEL: Because Germany paid for it?

Stiglitz: Because Germans paid, because everybody paid. We got our allies to pay full price for used equipment, and we got to refurbish our military. This time, most of the other countries were not willing to do so again.

SPIEGEL: Did Bush just miscalculate, or was he misleading the public about the true costs of war?

SPIEGEL: In the US, the financial costs of war are seldom discussed. It used to be considered a sacrifice to achieve common goals. Why is it different today?

Stiglitz: This is not like a world war where you're attacked. We were attacked in Pearl Harbor, we had to respond. This time, we had a choice, we had to decide how and who we are going to attack ...

Stiglitz: Well, we can afford it, that's not the issue. The issue is: $1 trillion or $2 trillion is a lot of money. If our objective is to have stability in the Middle East, secure oil, or extend democracy, you can do a lot of democracy buying for this sum. To put it in context: The whole world spends $50 billion a year on foreign aid. So what we're talking about is multiplying the foreign aid budget 20-fold. Wouldnt you say this could do more for peace and stability and security?

SPIEGEL: Bush would argue its worth spending that much to decrease the probability of a major terrorist attack on the US.

Stiglitz: Nobody takes that seriously. Instead, most people think the Iraq war has increased the probability of an attack. However, its difficult to put this aspect into financial terms.

SPIEGEL: How did you calculate the costs of the war?

Stiglitz: The official figures are only the tip of an enormous iceberg. For instance, one of the costs of the war is that soldiers today get very seriously injured but stay alive, and we can keep them alive but at an enormous price.

SPIEGEL: Is this the biggest item in your calculations?

Stiglitz: Its very important. The Bush administration has been doing everything it can to hide the huge number of returning veterans who are severely wounded - 17,000 so far including roughly 20 percent with serious brain and head injuries. Even the estimate of $500 billion ignores the lifetime disability and healthcare costs that taxpayers will have to spend for years to come. And the administration isnt even generous with veterans, widows and their kids.

Stiglitz: If you're injured in an automobile accident, and you sue the driver, you get much more for your injury than if you're fighting for your country. There's a double standard here. If you happen to put your life at risk fighting for your country, you get a little. If you walk across the street and get injured, you get a lot more. Similarly, payments for a dead soldier amount to only $500,000, which is far less than standard estimates of the lifetime economic cost of a death. This statistical value of a life in the US amounts to circa $6.5 million.

SPIEGEL: How much will a severely brain-damaged soldier cost the US government?

Stiglitz: My moderate estimate is about $4 million. For this group alone there will be a total cost of $35 billion that nobody is talking about. But look at the broader picture: The Veterans Administration originally projected that roughly 23,000 veterans returning from Iraq would seek medical care last year. But in June 2005, it revised this number to an estimated 103,000. No wonder the Veterans Administration had to appeal Congress for emergency funding of $1.5 billion last year.

Graphic: The Costs of the Iraq War

SPIEGEL: If this is a $1 trillion war, why couldnt the US provide its soldiers with safer body armor and better protected vehicles?

STIGLITZ: Obviously, the US can afford to pay for body armor. Rumsfeld, our Secretary of Defense, said you have to fight with the armor you have, but that's unconscionable. The military is focusing only on the short run costs. If they don't provide appropriate body armor, they save some money today, but the healthcare cost is going to be the future for some other president down the line. I view that as both fiscally and morally irresponsible.

SPIEGEL: This war could have been both safer for the troops and cheaper for the country?

SPIEGEL: Is war no longer affordable even for countries as rich as the United States?

Stiglitz: You have to remember we are an economy of $13 trillion a year. The issue is not whether you can afford it but whether this is the way you want to spend your money. In using the limited resources that we have for fighting this war, we have less resources to do other things. You saw on your TV what happened in New Orleans after Hurricane Katrina. The Reserves or National Guard are usually the people we use for those national emergencies. They weren't here, they were over in Iraq, and so we were less protected.

SPIEGEL: Before the invasion of Iraq, the US administration said the best way to keep oil prices in check is a short and successful war. A barrel was at $25 at that time, and now its over $60. What of this increase is due to Iraq?

Stiglitz: In our analysis about the cost of war, we only assumed a modest $5 to $10 caused by the war. We wanted to keep our study conservative, so no one would dispute our numbers, and no one did. But I believe thats a vast underestimation of the true cost.

SPIEGEL: But why? China and India are increasing their demand, real global growth has been going on. This is driving the prices.

Stiglitz: When demand rises so does supply -- that's how markets usually work. Now we're seeing that demand for oil is rising but we're not getting a commensurate increase in supply. And there's a simple answer, it's Iraq. But it's not just because it production has been down.

Stiglitz: The Middle East is the lowest cost producer in the world. They can produce oil for $10, $15 or $20 a barrel. Now we have the technology to produce oil elsewhere for $35 to $45. But who wants to develop fields or invest in new technologies elsewhere if they know that in five years' time, the Middle East may be supplying oil at previous prices?

SPIEGEL: In other words, were peace and stability re-established in the Middle East, the oil price would be back to maybe $25, despite the huge global hunger for energy?

Stiglitz: Yes. By the way that's the price level oil traders were speculating on in futures trading before the outbreak of war.

SPIEGEL: There should be huge economic pressure on Bush to end this conflict.

Stiglitz: The only people benefiting in this war are Bushs friends in the oil industry. He has done the American economy and the global economy an enormous disfavor, but his Texan friends couldnt be happier. The price of oil is up, and they make money when the price of oil goes up. Their profits are at record levels.

Stiglitz: Oh, its nothing personal. Its all about his politics.

SPIEGEL: There is an old saying: War is good for the economy.

Stiglitz: Listen, World War II was really unusual, because America was in the Great Depression before. So the war did help the US economy to get securely out of this decline. This time, the war is bad for the economy in both the short and long run. We could have spent trillions in research or education instead. This would have led to future productivity increases.

SPIEGEL: So is the economical mess of the Iraq war even bigger than the political?

Stiglitz: Well, we are so rich, we are able to withstand even this level. Crowding out other investments, weakening the economy in the future, thats not a crisis yet. But its an erosion. It becomes an issue for our legislators. And dont forget the serious issues of nuclear proliferation in Iran and North Korea. We used up our ability to deal with something serious by dealing with something that was less serious.

Stiglitz: We are helping the people that Bush says are evil. Teheran couldnt be happier about the high oil prices resulting from the Iraq war.

SPIEGEL: If the UN Security Council votes for sanctions over Iran and its oil exports, what would that mean for the world economy?

Stiglitz: It would mean an enormous disruption, as oil prices might rise over $100. You can increase the price from $25 to $40, and people can absorb it. If the price rises above $60, they become unhappy. They start to adjust, they move to smaller cars, drive a little bit less. At $100 or $120, there are major changes in lifestyle. The sales of cars will plummet. Poor people will be facing real problems of heat versus food.

SPIEGEL: The world cant afford sanctions at this time?

Stiglitz: We talk about not allowing their officials to get visas to visit our countries.

SPIEGEL: Thats not a harsh measure.

Stiglitz: Its no sanction. So the answer is, yes, we have no effective sanctions.

SPIEGEL: Professor Stiglitz, thank you for this interview.