SPIEGEL: Mr. Koenigs, are there realistic prospects for stability in Afghanistan?

Koenigs: Democracy remains the goal, but we haven't made it into the home stretch yet. However, expectations were unrealistic.

Koenigs: They were simply set too high, because everything had started off so well after the Taliban was defeated in 2001. The international community then took the dangerous step of trying to save money and personnel, in the development of an Afghan police force, for example.

SPIEGEL: You have been head of the UN mission in Kabul for six months now. Has the situation worsened in this time?

Koenigs: Yes. At the beginning of the year, we were convinced that the problem with the Taliban could be resolved quickly, especially militarily. We now know that we are dealing with a real resistance movement, and the sooner everyone realizes this, the better.

SPIEGEL: Has the "war on terror" become too important, at the expense of stabilizing the country?

Koenigs: The police and military are far too weak. Why has the Taliban been successful in some areas? Because they promise security and justice, neither of which exist in the south. There are districts there with 45 police officers for every 100,000 residents. That wouldn't even work in Bavaria.

SPIEGEL: What is the solution?

Koenigs: More Afghan soldiers and police officers. Germany along with other countries should also send more police trainers to Afghanistan, and the government needs more money to pay its soldiers. As long as the Taliban pays simple soldiers several times what the government can pay, we shouldn't be surprised by their success.

SPIEGEL: The insurgents in Afghanistan appear to be learning from Iraq.

Koenigs: Our security people say that they are indeed copying tactics and techniques used in Iraq, such as the use of roadside bombs. But, more importantly, what is also coming from Iraq is the belief that one can permanently destabilize a country or destroy a government. That's what makes the insurgents in Afghanistan so dangerously sure of victory.

SPIEGEL: How should the alliance react?

Koenigs: First of all, we should correct our analysis. Al-Qaida terrorists and former Taliban leaders aren't the only ones behind this movement. The insurgency also includes the children of Afghan refugees who have been educated in Pakistani Koran schools and are now fighting for their country's freedom, as well as young men from Afghanistan who have few prospects. We must provide them with prospects if we hope to dry out the insurgency movement.

Koenigs: It isn't easy, of course. But let me give you an example: If a simple farmer wants to send his intelligent son to school, his only option is a Koran school in Pakistan. His boy will be exposed to Islamist influences there sooner or later, and in the worst case he'll join the Taliban. To dry out the recruiting ground for the Islamists, we must build schools and provide opportunities, and we must do so without teaching fundamentalist ideas.

SPIEGEL: You need more than just a strategy for that. You need a lot of money.

Koenigs: Absolutely. Afghanistan is the world's fifth-poorest country. We invested ten times as much per capita in Kosovo.

SPIEGEL: But Kosovo is a lot closer to home

Koenigs: which doesn't necessarily make Afghanistan less important. The terrorists who blew up the London subway trains had their ideological roots in this region. The goal is to prevent international terrorism from finding refuge.

SPIEGEL: And that's why the West must provide more development aid?

Koenigs: Development aid from the East is just as welcome, as far as I'm concerned. Here's another example: There aren't enough female teachers for girls' schools in Afghanistan. The Iranians have plenty of teachers. And they also speak the same language as most Afghans. We would simply have to overcome our ideological differences and cooperate with Tehran and we'd be able to solve a very real problem.

SPIEGEL: Why don't we just ask the Afghans themselves for a greater commitment?

Koenigs: One problem is that democracy came from above and must now be enforced from top to bottom. First the president was elected, then the national parliament and then the provincial parliaments. The governors and mayors were also installed from above. The government has essentially no control over what happens in the villages. The Taliban, on the other hand, is a grassroots movement.

SPIEGEL: Democracy comes from above and the Taliban comes from below. How can this go well?

Koenigs: Afghanistan has never had a strong central government. But at least the warlords have been pushed back farther and farther. Although the government and the president are in Kabul, the central government has extended its power into the provinces. The president has just appointed and confirmed new police chiefs. Despite all the criticism, not a single province opposed his decision. That would have been unthinkable two years ago.

SPIEGEL: Nevertheless, the West is becoming less and less convinced that President Hamid Karzai is a credible champion of democracy. He is having trouble reforming the police force and he has done nothing to fight the drug trade. Is he unable or unwilling to do things differently?

Koenigs: We cannot measure the success of Afghan reforms on whether or not we approve of individual measures. We were very pleased about the police reform, and we only criticized 14 of the 86 police chief appointments. But we turned Karzai down at the beginning of the year when he asked for intensive police assistance in the south. Now we realize that it would have been better to support him.

Koenigs: He is the elected president, and when you ask Afghans who would be more suitable, they have no answer. That's a very positive thing for a politician.

SPIEGEL: He has just come to terms with some of the country's most powerful men.

Koenigs: It's true that we sometimes don't understand the equilibrium Karzai has established with the warlords and others with dubious pasts. But in doing so, he has at least significantly expanded the central government's sphere of influence.

SPIEGEL: The Taliban is said to have suffered heavy losses in some recent battles. Does this give you hope?

Koenigs: I'm afraid those are not true reports of success. The Taliban fighters' reservoir is practically limitless. The movement will not be overcome by high casualty figures. This is why we must focus, in both the military and the police force, on well-trained and ideologically motivated leadership personnel. But it's also important to develop a reintegration program for former Taliban fighters.

SPIEGEL: Is it even possible to win this conflict militarily?

Koenigs: No, because the conflict raging in Afghanistan, and elsewhere, is between Islamic fundamentalism and liberalism grounded in human rights. Look at the most recent elections in Palestine and Iran, for example, where militant fundamentalism is currently not exactly on the losing side.

SPIEGEL: How can this be changed?

Koenigs: Most of all, we cannot make so many mistakes. In Iraq, for example, the Baath Party should not been outlawed nor should the military have been disbanded. Hamas's success in Palestine shows us that the fight against corruption can also determine the legitimacy of governments. It also makes a big political difference when a government has no control over its territory. When there are places for terrorist groups to withdraw to and set up training camps, and then deploy their forces, we all have a problem -- a problem at home, that is, be it in Frankfurt, London, Delhi or New York.

SPIEGEL: How do you intend to convince the people in Afghanistan of the superiority of a liberal approach? 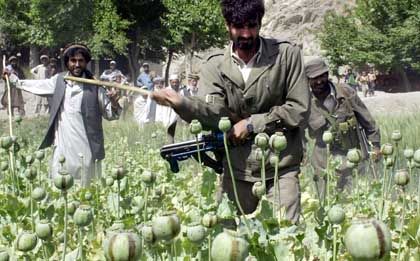 Koenigs: It's difficult, as we experienced in the case of Abdul Rahman, who was sentenced to death for converting to Christianity. The case prompted the US president to call the president of Afghanistan. He tried to force the judge in the case to acquit Rahman. What would (US President) George W. Bush have said to Hamid Karzai if Karzai had asked him to suspend a death sentence for an Afghan facing charges in a US court? Bush would have told him that the American judiciary is independent, that America has a separation of powers. Conversely, shouldn't we have to apply the same standards for Afghanistan?

SPIEGEL: Are you saying the West should simply have looked on?

Koenigs: No. Abdul Rahman was released, after all. But we shouldn't behave as if we were always right.

SPIEGEL: Does the same apply to the issue of drug crops?

Koenigs: Even the brightest among us have no easy answers for that. We have learned one thing, at any rate: Starting out by destroying the fields is the wrong approach. The Taliban were more than happy to take up the cause of the outraged farmers.

SPIEGEL: And yet it is difficult to conceive of the German military looking on helplessly as opium is grown in the north.

Koenigs: The German military cannot serve as a police force. This would mean that the soldiers would have to investigate, make arrests and destroy fields. No, that's the job of the Afghan police.

SPIEGEL: Which is already stretched to capacity, as you yourself have said.

Koenigs: The drug industry is about large sums of money and ultimately about security. We should prepare ourselves for a long struggle to achieve a liberal state governed by the rule of law in Afghanistan, and we will have to learn to deal with setbacks. A state-of-the-art, high security prison for drug barons is currently under construction in Kabul. Interest in the planned facility was so high that the construction plans were sold on the black market.