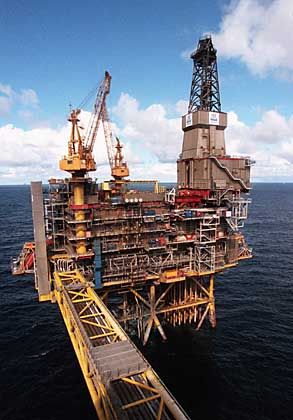 Norway is investing its oil money to ensure the prosperity of future generations.

The boss brings the coffee in personally, and it goes without saying that it carries the label "fair trade." No indigenous farmers were exploited in the interest of global capital.

For 39-year-old Henrik Syse, that's "perfectly normal" because ethics is his business. He's responsible for the moral standing of one of the world's leading financial empires. The boyish-looking father of four daughters has a Ph.D. in philosophy, he's a part-time professor, a researcher with a specialization in peace issues -- and now he also serves as a kind of ethics advisor at the upper ranks of the Norwegian central bank in Oslo.

Syse's office doesn't look like what you might expect of a man at the helm of one of the world's biggest investment funds -- it's a drabby affair. The scholar, who has written dozens of books on how to make a bad world better, sits there wearing a woolen sweater. The only personal touch on Syse's desk is a small bust of Aristotle, the spiritual father of the theory of forms and modern logic.

Gyse's position is an experiment, and it has been granted to him for the temporary duration of one year. That's what Syse wanted. His job is to invest 80 percent of his work force into the task of examining possible moral issues associated with the activities of the Norges Bank.

The central bank administers the country's pension fund, which is financed mainly by Norway's booming oil and natural gas industries. As the world's third-largest oil exporter, the fund has a king's ransom at its disposal. The last time the the books were balanced, the fund disposed of €196 billion ($250 billion) in assets. Analysts predict it will grow this year to become the second-largest pension fund in the world.

Roughly four percent of the fund's financial resources have gone into the state budget every year since 2001. The money is used to cover shortages and finance projects that benefit the well-being of country's citizens. Most of the remaining sums are invested for future generations -- for the time when Norway's oil and natural gas reserves will have been used up.

The fund is responsible for no less than 0.3 percent of all the stocks traded worldwide, it holds shares in more than 3,200 corporations and its portfolio reads like a "Who's Who" guide to the world of international investment. It includes Blue Chip corporations such as Accor, Adidas, BASF, Porsche, Siemens, Volvo and Zürich Financial. Norway has shown great acumen with its portfolio -- in 2005, it had a return on investment of 11.1 percent, or about €20 billion ($26 billion).

Of course, some people in Norway would prefer a slightly simpler system. Right-wing populist Carl I. Hagen would rather use the petrodollars to build vacation homes for Norwegian pensioners in Spain. But proposals like that don't get very far in a country that prides itself on its tradition of social justice and is home to the Nobel Peace Prize.

In November 2004, the government established ethical guidelines for the investment policy of its pension fund. Since then, an Ethical Council has overseen the various investments and separated the good from the bad. Seven corporations -- among them BAE Systems, Boeing and Honeywell -- were recently removed from the portfolio. Norwegian stocks worth 3.3 million Norwegian krona or €420 million ($535 million) have been sold as part of the ethical clean-up effort.

The corporations were blacklisted because of their involvement in arms production -- for producing components that go into the production of nuclear weapons that clash with the "fundamental humanitarian principles" of the Norwegian codex. Overall, 17 arms corporations have been declared off limits by Norway's ethics guardians.

In order to avoid similar investments in the future, Norges Bank has armed itself with a strong condex and team of ethicists. "We want to combine economic and ethical interests," investment director Knut Kjaer says. "We are powerful and we can invest in ethical values."

Syse was hired as a kind of early warning system, as the company's "very own ethical compass." But when Syse was first approached with the offer last summer, he thought it was a prank. "Do you even know who you're talking to" he asked? "I'm a philosopher, not a banker. If I had a stock or a bond in front of me, I wouldn't even know the difference."

He doesn't have to, either. Syse isn't expected to know the ABCs of investment management. All that's expected of him is that he examine the corporations that the bank invests in.

For example, Syse and his dozen co-workers investigate accusations about poor employment conditions, or about the exploitation of female and child labor at Third World production sites. In cases where there are accusations that, for example, the rights of women are being walked over or that methods of production clash with environmental regulations, the Norwegians ask the corporation in question to investigate and take action to eliminate the problem.

Such practices are "a burden for us as an investor," Syse says. That's why he and his team look into every rumor. "We demand answers to all questions," Syse adds, and "complete openness." But it's not an easy task by any means -- especially for a fund that makes as many as 22,000 business decisions a year.

The philosopher may be an expert on ethical issues, but he also has two feet planted firmly on the ground. He understands well the conflicts involved in his daily work, such as that between the expectation "of maximizing revenues and turning a good profit for future generations" and the conditions of production associated with global competition -- realities that are far from always being "morally impeccable." "That's the dilemma," Syse says with a smile, as if to soothe his own conscience.

Recently, a heated debate broke out in the pension fund's Oslo offices. If corporations active in the arms industry have been blacklisted, then shouldn't tobacco and alcohol producers also be penalized?

The Norwegian oil fund is one of the largest investors in the world, Syse points out. "The bigger your feet, the greater the risk of stepping into the mud," he says. But he demonstrates his political pragmatism by adding: "It wouldn't be smart to withdraw from everything; after all, that means losing influence."

And he wouldn't be a philosopher if he didn't have an authority to cite when moral doubts arise. In such situations, he likes to quote the English writer Samuel Jonson, who lived during the 18th century and wrote: "The fact of twilight does not mean you cannot tell night from day."