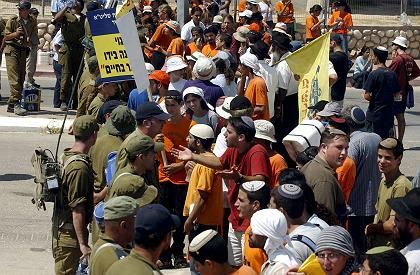 "Jews don't deport Jews!" a protestor yells into his megaphone, while soldiers drag settlers -- fighting back with hands and feet -- from their houses. One especially headstrong family is taken away in handcuffs, while another barricades itself behind gasoline canisters in the house next door. Suddenly, a female soldier breaks into tears -- "I can't do it anymore," she sobs.

So far, soldiers have only had to deal with staged situations, exercises that are intended to be as realistic as possible in order to prepare them for the most delicate mission in Israel's military history -- the evacuation of Jewish settlements from the Gaza Strip. More than a thousand Israeli soldiers at the Zeelim training in camp in the desert run through such exercises every day in preparation for when they will be called upon to remove their own countrymen from their homes. For the training program, a replica of a Palestinian village the army had created to practice street combat, was quickly transformed into a Jewish settlement.

D-Day is coming up in less than a week. That's when "Operation Disengagement" is set to begin, and when the training will give way to something dead serious. After 38 years of occupation, Israel will for the first time clear Jewish settlements and return the land to the Palestinians. It will be a "fateful moment," and one that already contains elements of a future peaceful solution to the Israeli-Palestinian conflict, believes former World Bank President James Wolfensohn. In his current role as special Middle East envoy of the international quartet -- the United States, Russia, the United Nations and the European Union -- Wolfensohn will provide support for the withdrawal. But will this moment truly bring the long-awaited breakthrough?

The Palestinian Autonomous Authority has already ordered tens of thousands of flags to celebrate the "liberation" of its land. "Israelis, go and never come back!" Palestinian Prime Minister Ahmed Kurei called out to a cheering crowd in Gaza City last week. "The withdrawal brings us one step closer to Jerusalem, a liberated West Bank and our dream of an independent state."

Whether the peace process will be revived will depend initially on how peacefully -- or conversely, how violently -- the settler withdrawal takes place. Could another religious/nationalist fanatic like Edan Natan-Sada -- the 19-year-old Jew who opened fire on Arab Israelis in a crowded bus last Thursday, killing four -- destroy everything?

The Mossad, Israel's intelligence service, has been warning against such an attack for months. The young settler, a member of the racist Kach movement, had deserted from the army to protest the planned withdrawal. Both the Mossad and the police fear that dozens of other potential attackers could be preparing themselves in the extremist underground movement. What happens if someone repeats an attack like Sada's, this time not in Israel's remote north, but in a crowded place such as East Jerusalem? Or if bloody clashes erupt between settlers and the military? Palestinian terrorists could also disrupt Israel's large-scale deployment of 55,000 soldiers and police officers by attacking evacuating troops or settlers in an attempt to make it seem that a supposedly defeated enemy is pulling out of Gaza. The man who initiated the withdrawal, Prime Minister Ariel Sharon, has already threatened that if this happens, Israel will retaliate "with a severity previously unheard of."

If his Gaza operation is successful, it will be a political coup for the former general, perhaps garnering him a spot in history next to peacemakers like Menachem Begin and Shimon Peres. But if the withdrawal turns into a bloodbath, he will have gambled away everything.

Why has Sharon taken on this act of force, and why does he allow his own people to curse him as a "traitor," even facing death threats from Jewish extremists? Is this still the same man who Palestinian President Mahmoud Abbas once called the "most gruesome and hostile of all Israelis?" 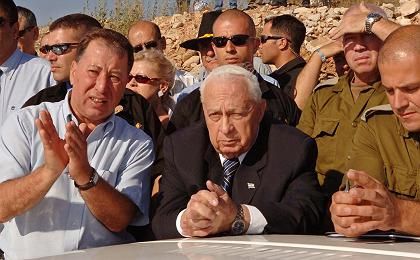 Sharon during a visit to the West Bank in July.

Sharon, who maintains the reputation of an unbending warrior, is now talking about peace and a future Palestinian state. "It is not the sword alone that can decide the bitter fight for this country," he recently said. Sharon occasionally refers to the Palestinians as "our neighbors," and assures them that Israel has the "honest will to respect your right to live in dignity and independence." Sometimes he even sounds almost like Noble Peace Prize winner Peres.

Sharon's coup of withdrawing -- unilaterally and without requiring a quid-pro-quo from the Palestinians -- about 8,000 settlers from the Gaza Strip and four smaller settlements in West Jordan has confused both friends and opponents. Why is the old warhorse suddenly sounding the retreat?

Diplomatically speaking, the withdrawal has already been a great success. Internationally, Israel is suddenly no longer being criticized as an incorrigible, constipated occupation power, but is instead being praised for its good will. Even vocal critics are suddenly posing for photo ops with Sharon and praising the Gaza plan as a "courageous decision." French President Jacques Chirac, for example, who previously had almost nothing flattering to say about the rough-and-ready Israeli, greeted Sharon like an old friend two weeks ago in Paris. The French magazine L'Express called Sharon a "great statesman," and the French greeted him with open arms, drawing comparisons with Charles de Gaulle, who presided over France's withdrawal from Algeria. Even Brussels, where until recently Sharon was expected to face a war-crimes trial for the massacres at Sabra and Shatila in the 1982 Lebanon war, has changed its tune, recently issuing a warm invitation to Sharon.

It is above all the imperturbability with which Sharon pushed through the plan -- against the wishes of his own Likud Party and with furious opposition from his previous foster children, the settlers -- that has earned him worldwide respect. Suddenly everyone likes the fact that Sharon is a bulldozer.

Neighbors Egypt and Jordan have long since returned their ambassadors to Tel Aviv, whom they had recalled in protest over Israel's military strikes in the Palestinian territories. Egyptian President Hosni Mubarak will now follow in the footsteps of Jordanian King Abdullah II and pay a visit to Sharon on his ranch in the Negev Desert. Indeed, the Egyptian ruler seems to be looking forward to the visit. "We'll be eating lamb," says Mubarak, "I have heard that the animals are already being nicely fattened."

The right-wing, national hardliner, once frowned upon by many, has become one of the strongest prime ministers in Israeli history.

And, at 77, he is also one of the oldest. Sharon fought in and barely survived Israel's war for independence in 1948, and has also taken part in every subsequent armed conflict against Arabs. The Gaza withdrawal is likely his last great battle, but it's one that he is forced to wage on the home front.

"He feels a sort of historic responsibility for his generation," says Sharon advisor Raanan Gissin. The prime minister himself likes to see himself as a lonely patriarch: "I sometimes look to the left and the right, but there is hardly anyone left but me."

"He was always extremely brave -- and stubborn," says his former army commander, Asher Levi, who believes that this has been the driving force behind Sharon's military successes. "He always took the initiative," says Levi, "and, in doing so, he made dangerous and highly controversial decisions." At times, Sharon even accepted heavy losses in his ranks.

When seen in military terms, Sharon is currently reducing the size of the front, withdrawing the settlers from an area he already believes is lost. The price of defending a few thousand Israelis in a sea of 1.4 million Palestinians has become too high. "The withdrawal will improve Israel's security -- and stabilize the political situation," Sharon explains. 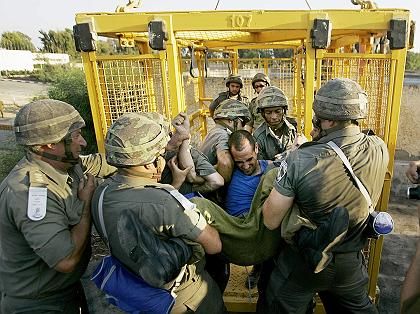 Israeli soldiers during a mock eviction exercise in August.

To accomplish it, he essentially had to overpower the Likud Party, which he helped to establish. "This is saying goodbye to Greater Israel," says Zalman Shoval, a former Israeli ambassador in Washington and an advisor to Sharon. "For the first time, Likud has consented to our withdrawing from a large portion of the Promised Land." For Avram Burg, a left-wing politician and former president of the Israeli parliament, the move spells an end to a bit of "national madness."

War comrade Levi, who still meets with the prime minister for long discussions, believes that Sharon has "realized that there is no purely military solution to the conflict with the Palestinians. Sharon remains Sharon, but it just happens that many things look different from the office of a prime minister." The prime minister, says Levi, has recognized that only the country's partnership with the United States can ultimately guarantee Israel's existence. And Washington wants progress.

Sharon doesn't make any secret of it. "I wanted a treaty with the Americans," he says. "I knew that if I wait too long, there will be another plan. I want to save as much as possible for Israel." This is why he has trouble understanding why the settlers are so furious with him.

After all, Sharon's friend, US President George W. Bush, guaranteed that the large settlements in the West Bank would remain in place. A return to the borders of 1967, as demanded by the UN, will not happen under Sharon -- an issue where the old Sharon is still very much in evidence. Anyone who thinks Sharon now believes that the settlement policy was a mistake is sorely mistaken. On the contrary, he continues to praise it as a "great achievement," and asks: "Would we live in Hebron today without settlements? Or would Rahel's grave in Bethlehem be on our side of the fence?" With his approval, the Israelis are still building. Only last week, the government approved plans to construct new Jewish apartment buildings in the West Bank, which Sharon calls the "cradle of the Jewish people."

This is why the Palestinians view the Gaza gift with extremely mixed feelings, fearing that they could pay a heavy price in the West Bank for gains in the Gaza Strip. "The joy of the Palestinians is mixed with fear and skepticism," says Abdallah Frangi, a leader of the Fatah movement in Gaza. 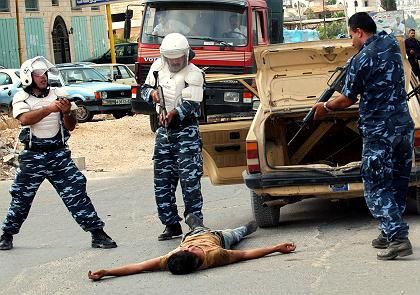 Palestinian police stage a mock arrest of a militant during a police training session in preparation for the Gaza pullout.

"Then there will also be no peace treaty with the Palestinians," fears Shaul Ariel. The former army commander has joined the Geneva peace initiative and believes that Sharon's only reason for promoting the Gaza withdrawal is to gain time. In truth, he says, Sharon is expanding the settlements in the West Bank and, with the help of the security fence, shifting borders to the benefit of the Jewish state.

Historian Tom Segev also believes that "there is no new Ariel Sharon. He hasn't suddenly found the way to peace and light." Sharon, says Segev, has always been a "pragmatic hawk, and that's what he will always be."

But it is the hawks who are most capable of making peace, as evidenced by Menachem Begin's historic reconciliation with Egypt in 1979.

Nevertheless, a peace treaty is by no means in sight today. Sharon has not yet accepted moderate Palestinian Prime Minister Abbas as a fully valid partner in the peace process, though he doesn't reject him as completely as his predecessor, Yassir Arafat. The Israeli prime minister has demanded that Abbas must first effectively and permanently destroy the Palestinians' terror structures, also a condition of the International Roadmap for Peace -- a roadmap which has failed thus far, but to which Israel wants to return after the withdrawal.

A "plan for a second withdrawal," Sharon has made clear, "doesn't exist." It could be, he warns, in his old cantankerous tone, that after the Gaza withdrawal "there won't be anything al all."