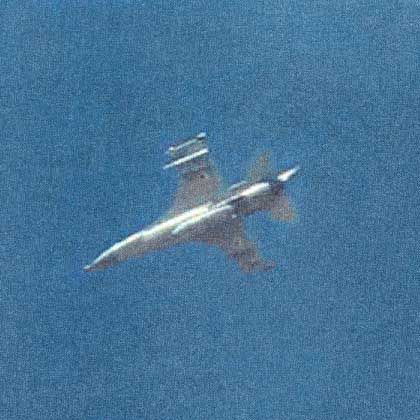 One thing is certain, when Germany's Defense Minister Franz Josef Jung visits Israel and Lebanon the end of this week, there will be no shortage of things to talk about. He will want a more detailed explanation from Israeli politicians, for examples, as to why their fighter jets buzzed a German ship last Tuesday and why a German naval helicopter was approached by Israeli jets on Thursday night. And when Jung visits the Lebanese government, concern within Germany's parliament about Beirut's wish to limit the activities of the German-led UN flotilla off the coast will surely be on the agenda.

And the German naval mission -- which aims at preventing Hezbollah from receiving arms smuggled in by sea -- had gotten off to such a promising start: A large majority in the Bundestag, Germany's parliament, supported the mission and Chancellor Angela Merkel spoke enthusiastically on Sept. 20 of the missions historic dimension. She said that it was impossible to overstate the significance of how much Germany is now trusted, that Israel explicitly requested that German soldiers take part in the United Nations Interim Force in Lebanon, or UNIFIL.

This trust, though, suddenly doesnt seem to go very far. Last Tuesday six Israeli F-16 fighter jets sped at low altitude over the Alster, a part of the German flotilla. At the time the vessel was cruising in international waters some 50 nautical miles off Israels coast just south of the border with Lebanon. The Israeli jets allegedly fired two shots from its canon before it released flares normally meant to confuse enemy air-defense missiles. At sea, that sort of thing is not done even as a joke amongst friends, said the German Chief of Staff Wolfgang Nolting in Berlin angrily.

The head of Germany's opposition Liberals (FDP), Guido Westerwelle, was equally annoyed. He was opposed to the German mission to Lebanon from the start due to the historically unpalatable risk of a military confrontation with Israel. This is exactly the sort of incident which I have always said would happen and which the government said was impossible, he raged.

Had the moment arrived which many had long feared: a direct confrontation between German and Israeli soldiers? Or had the young pilots simply played a bad joke? 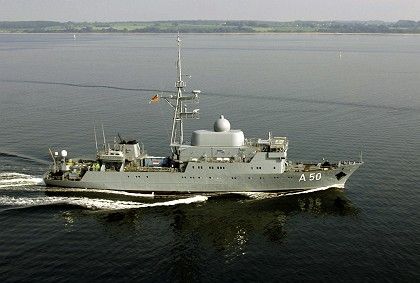 The German spy ship Alster prior to being sent to Lebanon.

Strongly worded protest was Berlin's number one strategy. The message was sent that the Israelis should clearly understand that German naval forces are there to help protect Israel and that the government in Jerusalem should think seriously about what sort of impact such incidents could have on public opinion in Germany. Furthermore, it was not a foregone conclusion that German forces would stay on in the Middle East through next summer.

Merkel's foreign affairs advisor Christoph Heusgen got Israels ambassador to Germany, Shimon Stein, on the phone straightaway and asked for an explanation. Then Defense Minister Jung telephoned his opposite number in Israel, Amir Perez, while lower ranks tried to clear up the confusion over the phone.

Over the weekend, Israeli Prime Minister Ehud Olmert said he regretted the incident and assured a delegation of leading German conservatives in Jerusalem that it would not happen again. Later, he issued the same promise to Chancellor Merkel. Olmert's office issued a statement apologizing "for the misunderstandings of the last week" and promising that "there would be direct communication between the German force and Israeli forces in order to ensure that a similar event would not happen again."

Not the first time

As it turned out, the Tuesday incident wasnt the first time tempers had flared. At first the Israelis claimed to know nothing about the Alster flyby, only to then loudly complain that on Tuesday morning a helicopter, heading for the coast, had taken off from a German ship without first issuing the necessary notification. According to the Israeli air force, this was why fighter jets had to be sent out. The Germans, though, knew nothing about it because the reports had not been sent up the command chain.

Two weeks previously, a similar event took place. In both cases though the Israeli fighter jets did at least turn back as soon as the German helicopter pilot identified himself over the radio. But both cases do demonstrate how threatened the Israelis feel, despite the ceasefire.

The reasons are obvious -- even though the international community is now present in Lebanon, many of the causes for the July conflict between Israel and Hezbollah have not disappeared. Because Hezbollah has openly rejected the UN Security Council resolution which led to the Aug. 14 ceasefire, the UN's main demands have gone unfulfilled. The two Israeli soldiers who were abducted on July 12 -- the event which triggered the war -- are still in Hezbollah custody and Israelis fear that the Shiite militia are still being supplied with weapons by Syria. Indeed, it is to prevent such weapons traffic that Israeli military planes carry out daily reconnaissance flights in Lebanese airspace -- flights which are in turn seen as provocative in Beirut.

Just how much power Hezbollah still has in Lebanon is evident from an incident a little over two weeks ago. A patrol of Spanish peacekeepers was stopped by Hezbollah fighters. The Spanish called the Lebanese army for support, but they never showed up. The Spanish had to turn back.

The freedom of movement of the UNIFIL fleet has also been limited by pressure from Hezbollah. In October, after the German parliament had approved sending a naval force to the Middle East, the Lebanese government -- in negotiations with the UN -- was able to impose restrictions on the fleet's movements. According to this agreement, UNIFIL ships are only allowed within six miles of the coast when Lebanon requests it -- that, at least, is what is noted in a confidential Bundestag defense committee document.

But that's not what Merkel promised during the parliamentary debate on the mission. She had said that Lebanon doesnt have any right to veto. We are allowed to travel in the whole region, was the promise she made before the German government agreed to the decision.

The FDP opposition party is now criticizing Merkel for misleading parliament. The mandate given to UNIFIL was never quite as robust as it was claimed to be, say FDP politicians. Deliberate deception to pass the Lebanon mandate, accuses FDP functionary Dirk Niebel. Absurd, is the governments answer -- at least for now.

But during a special meeting of the defense committee on Friday, Minister Jung had to admit that German naval ships were not always allowed to travel everywhere they wanted. The agreement, which was negotiated on Oct. 12, really does state that the ships may only enter the six mile zone when this is really required, in order to follow suspicious vessels for example. If naval ships want to travel into this zone for other reasons, a fuel stop at a Lebanese harbor for example, then they must first register with the authorities.

Even the Israeli mock attack on the Alster has provided the German opposition with fresh ammunition: The governments critics are now calling for Jung to get a clear explanation of the incident when he visits the Israelis in Tel Aviv. With Olmert having apologized over the weekend, the atmosphere promises to be relaxed. But things looked quite a bit tenser last week with Israeli military spokesmen proving intractable. We did not approach any ship and we didnt fire at a ship -- neither with onboard guns nor with chaff, maintained one high-ranking Israel air force officer. If anyone fires a shot, he has to submit a report which then ends up on my desk. There is no report, which means there was no incident.

The Alster crew's experience was rather different. Over the last few weeks they say they have received a number of visits from the Israeli air force, although the jets have always stayed at high altitude. According to the German authorities, the Israelis are always informed of who is cruising along the coast.

More than just a ship

The Alster though is no run-of-the-mill battleship. It is a spy boat loaded with highly sophisticated technology. Sensitive antennas are able to not only identify radar locations and monitor flights, but they can also listen in on radio and mobile-phone conversations. And the crew is not just made up of sailors, but also German secret service agents.

Furthermore, the ship is completely under German command; it's not sailing under the UN flag. Still, the Alster is supporting the UNIFIL mission, by monitoring radar stations on the Lebanese coast for example. During the July conflict, one of these radar units was used to steer Hezbollah anti-ship rockets -- rockets with just missed sinking an Israeli warship and which, accidentally, sent an Egyptian freighter to the bottom of the sea.

Such weapons pose an obvious risk to the UNIFIL fleet as well. According to a ministerial spokesman, the Alster is thus seen as necessary to help protect the troops. But the ship also managed to collect evidence of the Israeli mock attack. They recorded the approach of the fighter jets on video, the flares were captured by an infra-red camera.

Olmert's expression of regret may be enough to clear up the incident and ensure that the Germans and the Israelis cooperate enough to avoid similar incidents in the future. After all, both sides are aware that the danger of a deadly accident exists. Almost 40 years ago, on June 8, 1967 in the middle of the Six Day War, the Israeli air force bombed the American spy-ship the USS Liberty. Thirty-four sailors were killed and 174 were wounded. It was later claimed that during a shift change, the oncoming Israeli commander had not been informed about the Liberty position. He thought it was an Egyptian warship, he claimed after the incident.