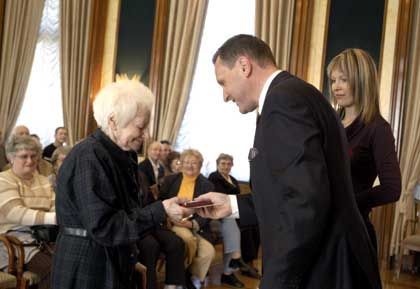 In the Russian Embassy on Berlin's main street, Unter den Linden, pillars of polished marble, chandeliers, velvet curtains and silk tapestry recall all the pomp of Russia's days under dictator Joseph Stalin. The embassy was quickly rebuilt after World War II and today, 200 old men and women have gathered in the concert hall. They wear baggy wind jackets and worn-out suits and look rather forlorn among the splendor.

His excellence Vladimir Kotenev gives a speech warning about anti-Semitism and neo-Nazism, and then thanks the war veterans for their heroic deeds for Mother Russia. He then presents them with a brass medal honoring the "60th Anniversary of Victory in the Great Patriotic War." A young woman hands each of them a red carnation. Some of the dignitaries have tears in their eyes.

Rudolf Rosenberg, head of the "Club of War Veterans" for Berlin's Jewish community, is among those receiving a medal. Later, while standing at the buffet, Rosenberg says, "It's nice that we have not been forgotten."

The club has existed for eleven years. The Jewish Veterans meet twice a month. Most of the time, someone gives lecture, often about Judaism or German history. The last one was about Albert Einstein. Rosenberg, 79, is the youngest in the club. The oldest is 101. Each year, the clubs rows get thinner, as more members pass on. But today, it is still about 60-strong.

The sex shop is broke and the smell of poverty abounds

After the medals have been awarded, club board member Jakow Kolodizner goes home to the working class district of Wedding. It's not the best of neighborhoods: The sex shop on the main street has just gone bust and graffiti coats the cement apartment buildings. At Kolodizner's building, where he shares a two-room apartment with his wife, the smell of cabbage and poverty lingers in the stairwell. 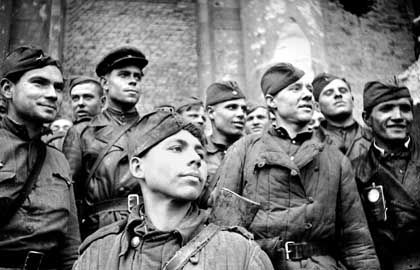 Soviet soldiers at the Reichstag.

Kolodizner explains that he was born in Ukraine in 1922, in the little town of Belaja Zerkow, 90 kilometers south of Kiev. Originally, it was home to many Jews, but not long after the revolution, the Bolsheviks shut down all the Jewish schools and synagogues. "We clandestinely celebrated Sabbath at home," he says. "People had two faces then."

The cupboards in the living room are full of books. Even as boy, Kolodizner read whenever he could. Goethe, Schiller, Heine: Germany, to him, was a land of civilization. But when he heard Adolf Hitler and Joseph Goebbels' anti-Semitic diatribes on the radio, his view was shaken. "We Jews," he discovered, "were in the worst of situations."

When Hitler attacked the Soviet Union on the 22nd of July 1941, Kolodizner, then a geology student, sent his parents to safety in Uzbekistan. Then he enlisted in the Red Army. He -- like more than a million Jews who signed up to fight -- did so with the hope that if he fought to protect his country, he would finally be accepted as a full-fledged Soviet.

In spring 1942, Kolodziner was on the Ukrainian front with Artillery Regiment 822 of Division 300. His division was chased by the Wehrmacht and pitilessly bombed by the German air force, known as the Luftwaffe. When the Germans closed in on the Soviet armies, his brother was killed in the fighting.

Kolodizner has a rather bleak perspective on life: "Man is just a small screw in a huge machine. There is no mercy and no humanity. The war was a meat grinder." After Stalin issued the notorious order #227 ("not a single step back") in July 1942, Kolodizner and his comrades knew that anyone who even thought about deserting would immediately be tracked down and shot by secret service forces. 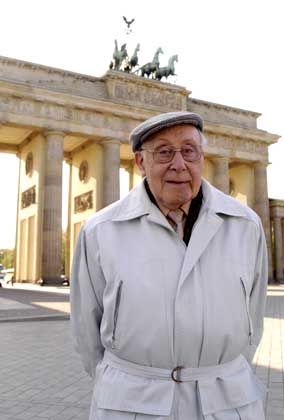 They had no choice but to face the Wehrmacht troops of the Sixth Army. During summer and autumn, those troops had taken the largest part of Stalingrad - until the Red Army started its counter-attack on November 19. Kolodizner remembers the hours before this decisive attack better than any other situation in his soldier's life. "It was a terrible night," he says. "My entire life passed in front of me. I was 20. I had hardly seen anything of the world. I had never loved a woman. God, I said to myself, if I could only survive this war by one year."

When the fighting broke out the next day, luck saved him. His platoon leader died, as did his company commander. Kolodizner himself was struck in the back by a shell splinter. It tore out a piece of flesh and he was taken to a military hospital behind the front lines.

After his convalescence, Kolodizner trained as an interpreter and when the war ended, he was stationed in Bratislava, Slovakia. "It was the happiest day in my life," he says. "I was lucky to have survived the inferno. At that moment, all the horrors were forgotten. Everything was light and happy."

He was ordered back from Germany during the 1948 Russian campaign against "Cosmopolitism," which was mainly aimed against Jews. As a result, he could not study law as he had hoped, but he did manage to become a professor of Spanish and German in Kiev.

Anyone who survived the Soviet Union, will get along fine here

Kolodizner arrived in Germany in 1992. Four years ago, he became a citizen of the nation he once so viciously fought. Because he, as a Jew, was continually discriminated against in his homeland, he said the decision was not terribly difficult. His sons now live in Berlin and Australia. His biggest pride is his granddaughter Polina whose color photographs hang over his sofa. She is a three-time winner of the Miss Young Germany dance contest.

Like two-thirds of the Jewish veterans in Berlin, Kolodizner and his wife Bella are academics. And like most of them, they live off welfare. Kolodizner, of course, knows that back in the Ukraine, all he would get would be a very small pension and is therefore grateful for what he receives. "Anyone who survived the Soviet Union," he says, "can deal very well with German welfare." 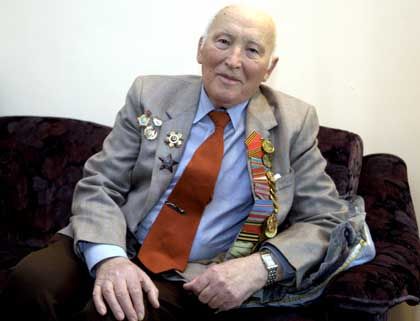 Kolodizner proudly wears medals from his time in "the inferno."

As Russian Jews who emigrated to Germany, Kolodizner and Bella are part of another, more contemporary, source of German-Russian friction. Germans -- even some German Jews -- are angry about their nation's policy of upping the number of Jewish refugees from the Soviet Union and its successor-states that it allows into Germany. The policy began in 1991 and since then about 200,000 have come. Most barely speak German and know little about Judaism.

Rudolf Rosenberg, another Jewish veteran, wants to change this. "We want to support our people as they learn to integrate into German life and Judaism," he says. His German is impeccable; he was born in Berlin in 1925, where his father was a tailor in the Scheunenviertel, the Jewish district.

"Emigrated to the wrong direction"

When he walked back from school on April 1, 1933, the first day of nationwide organized riots against Jews, he watched four SA-men circle around an orthodox Jew and burn off his beard. "And the people," he says, "just stood and stared." In 1935, his family fled to Leningrad, where his father came from. Just two years later, his father was arrested under the suspicion of being a German spy and was sent to a labor camp to Siberia. He was only released in 1953, after Stalin's death. "We emigrated in the wrong direction," says Rosenberg with a faint, but sad smile.

When Nazi-Germany attacked the Soviet Union, the 16-year-old Rosenberg had no doubts about enlisting. He served in a baton for fortification that built supply stocks and dug tank trenches. When the Wehrmacht closed in on Leningrad to starve it out, he was just three kilometers away from the front lines.

Starting in September 1941, the Luftwaffe attacked almost every night. The warehouses with food supplies were bombed out and soon there were too many dead bodies to bury. Close to one million people died during the 900-day siege of Leningrad. For his part, Rosenberg came down with typhoid, but survived.

Smoke rising from the beast's cave

Today, Rosenberg is a frequent guest at "senior hour" at Berlin's Jewish Community center. Here, he and pal Ilja Fridman exchange memories of the war.

"I drove my beloved T-34 tank all the way from Moscow to Berlin; Minsk, Warsaw, Lodz, Berlin," reminisces the 82-year-old Fridmann, who was born in Odessa. "On May 2, we reached the Reichstag." He leans his crutches against the wall and closes his eyes to call up the 60-year-old memories. The "cave of the fascist beasts," as Stalin liked calling the building, was totally destroyed; smoke rose from the blackened window holes. "But all of a sudden," Fridmann says, "it was totally quiet."

Fridmann leans his square, bald head back. This is his most vivid memory of the end of the war in Berlin. This silence. After the rocket launchers had been howling all day and night, after the muzzled sound of bombs and shells exploding and assault rifles rattling. After all that infernal noise, came deadly silence. At the Moltke Bridge over the Spree, just north of the Reichstag, Germans hung white sheets out of their windows and shouted "Hitler kaput." "When it started to dawn on us that we had escaped this Hell alive," Fridmann says, "we had a few drinks too many."

Rosenberg was so drunk on May 9, 1945 that he could not find his way back to his apartment. "It was an incredible feeling of bliss. Finally, the Nazis had been beaten."

Images that do not fade

Fridmann and his wife Sarah have been living a small apartment in Berlin's ethnically mixed Kreuzberg district since 1998. When Rosenberg visits him, Fridmann is often watching a Russian program on TV. The former tank driver pulls out certificates with Stalin's portrait: One is a certificate from Stalin expressing gratitude for the attack on Brandenburg on January 31, 1945. Another dates from April 23, 1945 thanking him for reaching Berlin and a last one praises him for taking in Berlin in May.

What the certificates do not portray, however, are his horrifying memories. For example, he remembers the Battle of Seelower Heights, in which more than 30,000 Red Army soldiers died. "But when you are young," says Fridmann, "you know no fear." But one image has etched itself into his memory forever. It is of a tank that took a direct hit. Its crew -- among them a woman -- managed to get out, but only as human torches.

Fridmann takes his medal-laden jacket out of the closet. About 20 medals bulge across the front. "Three red star medals for distinction in the battle field. That is a real rarity," Rosenberg says, proudly. "An especially brave soldier."

"Ilja, when the next decade of jubilation comes by, in ten years, not many of us will be around," says Rosenberg. "Hell, no! Not true," answers Fridmann. "We'll still be holding on."