Less than a year ago, everything seemed to be going splendidly at aircraft manufacturer Airbus -- at least officially. The company's literature was filled with glowing talk of its profitable business deals and its excellent outlook for the future. Airbus jobs, said the company, were secure through 2015. As recently as January, the company announced plans to hire an additional 2,500 workers. 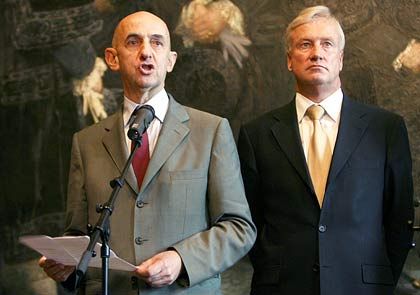 Now, only a few months later, Airbus is singing an entirely different tune. No one mentions new hires these days, and even current jobs are anything but safe.

Up to 10,000 jobs could be eliminated and entire plants could be up for sale. Upon assuming office last week, Airbus's new CEO, Louis Gallois, announced what he called "painful cuts." Gallois, 62, is the company's third chief executive in only 100 days. His frustrated predecessor, Christian Streiff, abruptly announced his resignation last Monday, saying that he had not imagined that the crisis would be so serious and that the company's structure could be so cumbersome.

In his previous position, Gallois ran Airbus parent EADS together with his German colleague, Thomas Enders, and his new tenure at Airbus will be based on a similar power-sharing arrangement. When it comes to restructuring the company, Gallois plans to continue where Streiff left off. But Gallois, who once headed the French national railroad company SNCF, brings something to the table that his predecessor lacked, something that is essential at Airbus: a knack for diplomacy.

Streiff quickly discovered that Airbus could not be restructured with business acumen alone. In fact, economic logic often contradicts the political logic that is so important in shaping behavior within the company and its executives -- a fact of life that isn't likely to go away anytime soon. Airbus has been a politically charged body since its parent company, EADS, brought together Europe's fragmented aviation and aerospace industry under one roof, aided by hefty government assistance and subsidies.

To preserve Germany's influence over the venture, the government now plans to hold an indirect share in EADS through the Kreditanstalt für Wiederaufbau (KfW), a government-owned bank that finances reconstruction in Germany and abroad. This form of government participation is a first in recent German economic history. Regardless of their political makeup, the administrations that preceded Berlin's current Grand Coalition (of the conservative Christian Democrats and the left-leaning Social Democrats) took a decidedly different approach by doing everything within their power to reduce government participation in corporations -- first at Lufthansa, then in the country's privatized postal service and at telecommunications giant Deutsche Telekom and, most recently, in the German national railway, Deutsche Bahn.

Unlike their French counterparts, the prevailing view among German politicians of every stripe is that the state should keep its fingers out of business. But EADS is a special case, and German Chancellor Angela Merkel is unlikely to face any opposition from within her own ranks.

Through its indirect investment, the government wants to prevent the EADS shares currently held by DaimlerChrysler from ending up in foreign hands. Russian President Vladimir Putin has not made it a secret that he would like to increase the five-percent stake Russia's Vneshtorgbank recently acquired. Spain has also signaled an interest in upping its share in the Airbus parent company.

But the German government also sees its investment as a way of preventing domination by the French, who like to see EADS as their own company. Indeed, the Germans fear that the French could boost their position and that of production sites in France when Airbus is restructured, which would upset the carefully constructed balance of power in their favor.

"We want France and Germany to have an equal say in the EADS project," Merkel stressed at a meeting in Paris last Thursday with French President Jacques Chirac. Both sides, she said, must be on equal footing when it comes time to negotiate the pending restructuring measures.

Chirac assured the German chancellor that the burdens of Airbus restructuring would have to be divided equally between the company's two main production sites in Hamburg and Toulouse. Gallois, ever the diplomat, delivered the same message during his first visit to Hamburg in his new position.

The city will be especially hard-hit by the Airbus crisis. Airbus employs 21,300 German workers, with 11,000 working in Hamburg's Finkenwerder district alone. The Hamburg Senate has invested about €700 million ($876.7 million) in taxpayer funds to upgrade the site so that it can handle some of the production and shipping responsibilities associated with Airbus's new A380 super jumbo jet.

Hamburg Mayor Ole von Beust is also prepared to draw on city funds to preserve the city-state's influence over its most-important employer. "Hamburg is willing to invest in EADS," he says.

Von Beust is referring to DaimlerChrysler's share of EADS, which the company now holds for purely historic reasons. Now that it has abandoned plans to transform itself into a broader technology company, the carmaker has lost its strategic interest in aircraft construction and wants to unload its investment.

In talks with the German government, Stuttgart-based DaimlerChrysler has agreed to maintain a 15-percent share in the aviation and aerospace company. Under the government's plan, the KfW will acquire the remaining 7.5 percent of DaimlerChrysler's holding, which will essentially be parked there until a German buyer can be found. Hamburg is seeking a share of that 7.5 percent.

In talks with officials at the Finance Ministry, the KfW's management, under the leadership of Ingrid Matthäus-Maier -- a former Social Democratic politician and current member of the bank's board of directors -- has shown a clear interest in the proposed venture. According to Matthäus-Maier, the KfW has sufficient liquid assets to acquire the share at its current estimated price tag of about €1.5 billion.

A deal is imminent 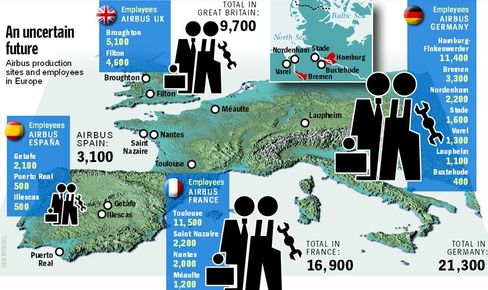 Talks with DaimlerChrysler have also gone well. Thomas Mirow, a state secretary in the Finance Ministry, has been discussing the matter with the chancellor for months. According to government sources, the deal is likely to be signed in the near future.

The French are apparently taking a benevolent approach to the German government's efforts. The French government already holds an investment in EADS and is represented on the transnational venture's board.

The challenge that new Airbus CEO Gallois now faces is to restructure the ailing aircraft manufacturer without alienating the governments of both countries.

If Gallois had his way, he would probably concentrate A380 production, currently divided between Hamburg and Toulouse, in the southwestern French city. Delays in building the A380 were among the main reasons behind Airbus's current troubles, and executives at the company, both past and present, blame Hamburg for those delays.

"We cannot live with the concept of two production sites splitting all final assembly lines," said Gallois, essentially reiterating his predecessor Streiff's take on the issue.

But changing the status quo isn't going to be easy. If Hamburg were to lose a portion of production, the highly controversial runway extension on the Finkenwerder plant grounds would turn out to be an enormous failed investment and could even face demolition.

To ensure that the cargo version of the A380 could be delivered from Hamburg to customers in Europe and the Middle East, the runway at the site is currently being extended by about 600 meters (1,968 feet) and a second delivery center is in the planning stages. So far Airbus has only been able to sell 25 of its A380 cargo jets, which have been on offer since late 2000, mostly to US customers.

According to reports leaked last Wednesday, about 6,600 employees at plants in the German towns of Nordenham, Stade, Buxtehude, Varel and Laupheim could soon be reporting to new employers, which only adds to the general mood of uncertainty at Airbus. A spokesman at parent company EADS sought to allay concerns among the plants' agitated employees by telling them that the alleged plans are "not true and completely made up." Nevertheless, no one at EADS seemed willing last week to provide any guarantees where the German factories are concerned. 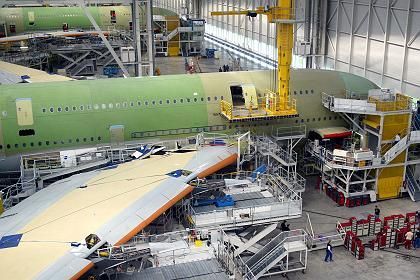 Assembly of the A380 super jumbo in Toulouse, France: Painful cuts will be spread between France and Germany.

Employees at the Finkenwerder and Bremen plants, where the smaller Airbus models and the company's cargo loading system are produced, can feel relatively safe about their jobs. The Stade plant is also likely to remain critical to the company for the foreseeable future because it counts among the world's leading producers of high-tech carbon fiber composites. But job security is more of a concern for workers in Nordenham, Varel, Buxtehude and Laupheim, because much of what they manufacture -- fuselage shells, metal parts and components used in aircraft air-conditioning and lighting systems -- can be produced at a lower cost on the global market.

Like his predecessor Streiff, Gallois also plans to break up and simplify the European conglomerate's complex organizational structure. When then independent aviation firms Aérospatiale, Casa and former Daimler subsidiary Dasa were merged in July 2000 under parent company EADS, many executives were unhappy about what they perceived as excessive influence at Airbus headquarters in Toulouse.

To overcome management opposition and allay executives' worries over their own jobs, the then Airbus CEO Noël Forgeard developed a complicated management structure. But it was precisely that complexity that helped obscure problems with the fuselage wiring in Hamburg.

In addition to managers for individual series, countries and production sites, Forgeard's management structure included executives responsible for so-called Centers of Excellence who are charged with managing specific production segments. These executives either share power with or report to additional senior executives who seem well removed from daily operations.

Because many within this complex structure were so focused on preserving their own fiefdoms and perks, it took years before anyone noticed that the engineers in Toulouse and other locations had long since begun using state-of-the-art 3-D computer design programs like Circe and Gilde, while their counterparts in faraway Hamburg were still working with outdated systems. This discrepancy finally came to light when the first problems with fuselage wiring emerged just over a year ago, leading to a decision to use the newer systems in all Airbus plants in the future. Nevertheless, it is likely to take at least two years to retrain all engineers in Hamburg, and until then they will continue to use their outdated wiring design programs to configure the A380's electronic systems -- at greater effort and significantly higher costs.

To make matters worse, the falling US dollar exchange rate presents Airbus executives with a new set of challenges. "The dollar exchange rate has dropped by 41 percent since the beginning of the A380 program," Gallois complained last week -- while failing to mention the man who once reported to him and who is responsible for the Airbus's current vulnerability to exchange rates: former Airbus CEO Forgeard.

Three years ago, former EADS co-CEOs Rainer Hertrich and Philippe Camus suggested to Forgeard that he shift a portion of production to the United States to reduce the company's dependency on the ups and downs of the US currency. Forgeard not only flat-out rejected this sensible proposal, but also ridiculed his two bosses. "If we had heeded every bit of good advice," he scoffed, "we would already have reduced depth of production, would probably have laid off workers and would have moved production elsewhere."

The way things are looking today, Gallois will have to take exactly the kinds of steps Forgeard once believed would be inconceivable.