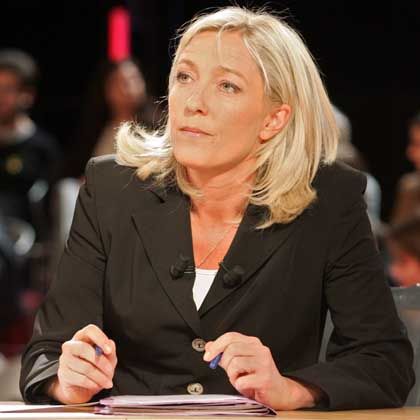 Marine Le Pen may be preparing to take over the far-right National Front from her father Jean-Marie.

After clearing the plates, the waiters are serving the dessert, a fruit tart, after a dinner of vol-au-vent and beef bourguignon. The air is warm and humid in the banquet room of the "Relais du Miel" in Montargis, a small city only two hours south of Paris by car, where 220 guests are sipping coffee and after-dinner drinks. But before the guests' drinks can be refilled, the restaurant, normally a venue for weddings and village festivals, becomes respectfully still. On one side of the banquet room, which is decorated with blue, white and red cockades, a tall blonde woman grasps the microphone.

Marine Le Pen doesn't waste any time. "France isn't doing well," says the deputy chairman of the Front National (FN), or National Front, "we know it and everyone else knows it, but no one does anything about it."

Her words are met with a murmur of approval -- and the sound of teaspoons scraping against sugar bowls. Le Pen's audience, some of whom have come here from neighboring districts, and some with their wives and children in tow, form a representative cross-section of the region: shopkeepers and truck drivers, government bureaucrats, teachers and lawyers. Everyone seems to know everyone else -- and the speaker apparently knows most of her audience members, who she calls by their first names.

Speaking in a smoky voice, the 38-year-old Le Pen gives a passionate speech about the consequences of globalization and the growing national debt, criticizing European Union expansion and what she calls Brussels' "euro dictatorship." She talks about out-of-control immigration, a growing crime rate and the difficult situations ordinary citizens find themselves in. Her speech is a gloomy diagnosis of the Fifth Republic, a tirade against the deterioration of traditional values and the decline of the French people and nation. "This," says Marine Le Pen, "must finally come to an end."

Her words are met with enthusiastic applause. Montargis is typical of "la France profonde" -- the country's rural regions, which many of the French still consider the indestructible heart of their civilization, despite economic crisis, structural change and emigration. Le Pen, a Parisian, cleverly suggests that this is the place where a revitalization of the fatherland could begin, this place where the heart of the "Grande Nation" still beats on the correct side, by which she means the "right side." "We need you," Le Pen assures her listeners. "Hope for France -- Le Pen in the Elysée!"

"She's right," says Simon, a retired construction contractor from the Marne region, shouting to make himself heard over mounting applause. He dabs the sweat from his brow and nods appreciatively in the direction of the guest of honor. "She is of the same caliber as the old man. Our Marine is the Joan of Arc of the Front National."

Simon's comparison with Le Pen's legendary father seems bold. But while the French public becomes increasingly obsessed with every detail of the battle between Ségolène Royal, the Socialists' rising star, and her conservative rival, Interior Minister Nicolas Sarkozy for the best starting position in the upcoming presidential election, Marine Le Pen is secretly billing herself as the favorite of France's far right.

Thirty-four years after the party was founded, her combative father remains the uncontested captain on the bridge of the "steamship" -- the name party members call the FN headquarters at "Montretout," an imposing mansion in Paris suburb Saint-Cloud. Nevertheless, all signs point to Marine soon taking the reins from her 78-year-old father.

The changing of the guard, though overdue, won't happen before 2007, after Jean-Marie Le Pen's fifth bid for the French presidency. Le Pen launched his presidential campaign last Wednesday, calling it "revenge for 2002." Four years ago the FN patriarch triggered a political earthquake when he captured just under 17 percent of the vote in the first round, knocking then Prime Minister Lionel Jospin, a Socialist, out of the race. Only in the second round was Le Pen defeated by current President Jacques Chirac. But this time around he plans to surpass his performance in 2002. "Retreat means giving in to pressure from the enemy," says the former paratrooper, "and the word retreat is not part of my vocabulary."

Preparing for the future

Indeed, the FN's -- and its chairman's -- influence extends well into the conservative and middle class camp. According to opinion polls, Le Pen could capture up to 18 percent of the vote, a result which places towards the top of a list including more than two dozen presidential hopefuls -- and well ahead of his right-wing adversaries, such as Philippe de Villiers of the patriotic "Movement for France" and Bruno Mégret, the head the "National Republican Movement," an FN splinter group.

Le Pen has been cultivating the country's right-wing territory for more than five decades with his unwavering message. He wants to see illegal immigrants deported and promises to be tough on crime, an approach that fans the flames of hidden xenophobia. And with his promise to shake up the entrenched ruling castes in the government, business and administration, he has put his finger on the uniquely French sense of "morosité" -- a blend of frustration, helplessness and general unhappiness with government. "The Le Pen bomb," wrote the magazine L'Express in its cover story last week, "has not yet been defused."

The leader of the National Front is "more complex that is generally believed," warns Marcel Gauchet, academic director of the University of the Social Sciences and editor-in-chief of the professional journal Le Débat. "He combines old right-wing extremism with a demagogic version of republicanism."

But despite having ruled out a departure from politics, Le Pen began preparing for the future long ago.

With an eye to preserving his life's work, he has tapped his favorite daughter as the standard-bearer of his ideological legacy. 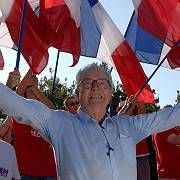 Jean-Marie Le Pen received 17 percent of the vote in 2002. This time around, he may do even better.

In addition to having her father's famous name, the "Slavic beauty" (a term Marine coined herself) is every bit her father's daughter when it comes to the ruthlessness with which she pursues her goals. Moreover, the heir to the throne comes with a life history that gels with the intrigues, feuds and personal tragedies that have peppered the right-wing extremist organization's history.

Her first encounters with politics were, as she says of the "most violent, gruesome and brutal nature." When Marine was eight, a bomb attack on her family destroyed the Le Pen's house in Paris's 15th arondissement. Miraculously, no one was killed in the attack. But the experience left Marine with a feeling of helplessness and exclusion. Besides being treated poorly in school by her leftist teachers, Marine was often ignored by her absent parents as they fought their ongoing political battle for the party and nation. She was only able to establish a closer relationship with her father when, at the age of 13, she was permitted to accompany him during an election campaign in Paris's eastern districts.

The FN's 1984 success, when 10 of its delegates became members of the European Parliament, was followed by a year of family disasters. The Le Pens' storybook right-wing wedding fell apart when Marine's mother, Pierrette, moved to America with her husband's biographer and later demanded alimony. "Then let her clean houses," was the cuckolded husband's response. Pierrette's next move was to pose nude for Playboy, wearing an apron and wielding a bucket and a mop. Marine describes her parents' bitter and very public quarrel as a "descent into hell."

She studied law and defended illegal immigrants, but her family name proved to be a handicap when she attempted to start a career as a corporate lawyer. She returned to the lap of the party and her family, becoming the FN's legal advisor. Divorced, remarried and the mother of three children, she soon embarked on her own political career. When the party split apart in 1999, FN leader Le Pen would trust no one but his own family, and together with his children, grandchildren and relatives, he eventually transformed the movement into a family political enterprise.

Marine assumed the leading role in this venture. Since her father's surprise success in April 2002, she has served as the party's figurehead. With her elegance and eloquence, she quickly became a darling of the talk shows, and her sudden prominence brought her a seat in the European Parliament, a seat on the Paris regional council and, finally, a position within the party's leadership. In 2003, Marine's father appointed her deputy chairman of the National Front.

Since then Marine has sought to steer the "steamship" away from its extremist right-wing waters and into the patriotic center. If Le Pen has her way, the National Front will not only become electable but also capable of capturing a majority and -- perhaps in the distant future -- even gain control of the government. Instead of the shrill provocations against foreigners and Jews, which brought her father lawsuits and expensive verdicts, the daughter intends to transform the heterogeneous group into a respectable right-wing party. To achieve this goal, she has clearly distanced herself from skinheads and extremists in combat boots.

Together with fellow party members, Marine created an organization known as "Le Pen Generations," an intellectual group for political youth in which the hottest topic of debate is a new "governing culture." The party already has almost two dozen of these interest groups, including the club for "Hunting, Fishing and the Environment," the "League for Life" and the "National Circle of Jewish Frenchmen."

A shift to the center

Marine has also distanced herself from the party's traditional extremist demands, no longer calling for the abolishment of the euro and branding the European Union as the enemy of French sovereignty. In keeping with this new direction for the National Front, the deputy chairman has even given herself a new look. Eleven kilos lighter and sporting a fashionable hairdo, Le Pen new embodies National Front's modern look. In her autobiography ("Against the Current"), Marine Le Pen even reveals herself as a cautious critic of her powerful father.

But as much as Marine's new, slimmer and more fashionable look meets with enthusiasm among her supporters, the FN's traditionalists are vehemently opposed to her efforts to soften the party's ideology. Her understanding for opponents of globalization ("They ask the right questions but have the wrong arguments") doesn't sit well with the party's more dogmatic members, and her sympathy for homosexuals and abortion has set off grumbling among its Catholic traditionalists.

But the deputy chairman doesn't allow such troublemakers to break her stride. "A vote for our party is no longer an act of rebellion. Our voters are no longer merely those with failed lives," she says, explaining the shift in direction. "Thirty years ago, we were alone in our views, but today our demands are more popular." Of course, the party also runs the risk of losing its solid core of radical right-wing voters.

Aware of these challenges, the FN strategist attempts to perform a balancing act during the campaign appearance at the "Relais du Miel." First she defends the party's move toward the center and admonishes her audience to approach "the political opponent." But then Marine, following entirely in her father's footsteps, castigates France's conservative government.

The National Front's main adversary, says Le Pen, is not the Socialists' leading candidate, Ségolène Royal, but Interior Minister Nicolas Sarkozy, who has co-opted one of her father's favorite causes with his staunchly right-wing rhetoric against the "ills of immigration." "Nicolas Sarkozy has abolished the deportation of criminal illegals," she says. "Sarkozy is a danger to France."

She ends her speech with a passionate appeal to support her father. "France is at stake," she calls out into the room, "talk to your neighbors and support Jean-Marie Le Pen -- so that our fellow Frenchmen vote for the original, not the copy."