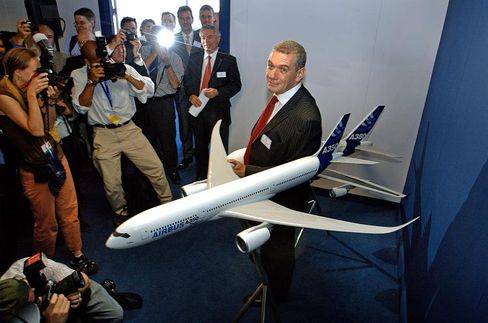 Airbus Chairman Christian Streiff: "I don't have time to go into the details."

Anyone who saw 51-year-old Christian Streiff last Monday at the Farnborough air show in Britain was quickly amazed at how fast the former building-materials manager had settled into his new job as the head of Airbus.

With marked words and well-targeted swipes at Boeing, the company's chief rival, Streiff praised Airbus's long-haul jet, the A350. The aircraft is planned for a 2012 completion date, just in time to steal the limelight from the American competitor's 787 model. Alone the unwieldy abbreviation XWB ("extra wide body"), representing the improved fuselage of the €8 billion plane, shows that the French have loosened their tongues a bit, even if the letters seem more appropriate to Weight Watchers.

Streiff was taciturn as he was asked about production delays in another Airbus project, the A380 super jumbo jet. A few weeks ago, news about delays in delivery pointed to wiring-installation problems in the Hamburg plant, pushing back production by six months. Greeted by this disaster, among others, Streiff began his new job -- and faced his biggest challenge.

"I don't have time to go into the details," Streiff responded diplomatically. Thomas Enders, co-head of Airbus's mother company EADS since July and Streiff's boss, spoke more directly: "It doesn't help to mince words: Hamburg is the site of our A380 problem." Another former co-head at EADS, Noel Forgeard, a Frenchman, had said the same thing before. The only difference is that when Forgeard began attacking Airbus's Hamburg workers, he sparked shrill dissonance within the company and he was ultimately pushed out.

With his own forthright critique of the Hamburg problems, Enders seemed to want to signal the end of a culture of exaggerated civility in the company's most-important division. Of course, that air of pseudo-civility has often only thinly veiled tensions at the core of the Franco-German aerospace giant. Throughout the short history of EADS -- created in 1999 through the merger of Daimler subsidiary Dasa and France's state-owned Aerospatiale -- executives from Germany and France have fought bitterly and almost daily to gain the strategic advantage in the company for their respective countries.

Nonetheless, infighting between different Airbus production facilities, which are located across Europe, has long been considered impolitic within the company. Now, with Enders on board, that years-long moratorium appears to have been lifted. That's an especially striking development given that it was Enders' former employer, Daimler, that was responsible for creating the current malaise in Hamburg.

At the end of 1995, the Daimler board introduced its dramatic "Dolores" cost-cutting program, which would lead to the elimination of 8,000 jobs -- the lion's share in Hamburg. The ultimate goal of the dramatic action was to stem the flow of red ink at Daimler subsidiary Dasa and to create better conditions for the planned European mega-merger. That was the start of the current misery that plagues Airbus's Hamburg facility today.

Investments in a state-of-the-art IT system or new construction technologies were frowned upon because of costs. Instead, the Germans enjoyed mocking the supposedly old-fashioned French who had stuffed their factories with employees who were far too unproductive.

The corporate suffering caused by the clear-cutting of employees at the Hamburg plant can still be felt today. In France, aerospace jobs are amongst the most hotly sought after by university students. But young Germans starting their careers would rather work for a company like Siemens or BMW. This has forced Airbus Hamburg to roll out an expensive training program to recruit qualified workers.

The bitter rivalry between the most important Airbus locations -- Toulouse in France and Hamburg in Germany -- has also crippled production. Until as late as the creation of EADS in 2000, all lines of information at the company came together at Airbus's German headquarters. After the merger, the French tried to focus all central operations in Toulouse -- an effort that triggered major opposition in Hamburg. To soothe the Germans, then-Airbus chief Foergeard and his deputy, Gustav Humbert, initiated a complicated management structure, one that recalls the mess with the cable system in the A380's tail that has led to a six-month delay in delivery of the jumbo jet.

The company's Byzantine Franco-German management structure has also made it impossible for Airbus to respond quickly to problems. Even today, many inside the company are unable to determine the line of command and who is actually responsible for what. 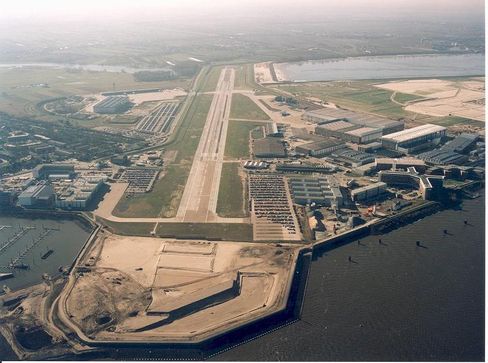 Airbus production facilities in Hamburg: "It doesn't help to mince words -- Hamburg is the site of our A380 problem."

Further complicating the situation, a few years back Airbus's leadership introduced so-called centers of specialization, like the interior fittings department in Hamburg. The teams were ensured that they would enjoy considerable autonomy. But instead of using the newfound freedom to work efficiently, the departments isolated themselves from each other entirely -- a reality that is bitterly underscored by the current A380 delays.

Just two weeks into his new job, Airbus's chief Streiff has made it very clear that this cannot continue. One of the first steps he took as the new head of Airbus was to appoint an executive who will be solely responsible for dealing with problems in the German plants where A380 work is being done. The new position will involve gathering all the relevant and sensitive information and taking it straight to the top.

Rüdiger Fuchs, the 40-year-old, trained aerospace engineer who has been assigned the role, has already demonstrated how seriously he takes his new job. In order to get A380 production back on schedule, he has already ordered longer working hours at the German plants.

But there may be some consolation for workers at the Hamburg plant: Their facility isn't the only one in Europe that is creating headaches for the A380 project. In Spain, where sections of the horizontal tail plane are produced, problems have also been reported. Internal company documents obtained by SPIEGEL show that test flights in Toulouse revealed problems with the structure of the important component, one of whose functions is to carry the giant plane's rudder. The documents also show that this was the reason for Airbus's "decision" at the beginning of March to "strengthen" the component -- a move that will lead to further unexpected A380 production costs and at the same time increase the jet's total weight. The plane's planned low weight and fuel efficiency has been one of the main selling points Airbus has used to market the aircraft.

An official Airbus spokesperson indirectly confirmed that improvements must be made to the tail parts. But the speaker argued that changes like this are common as stress tests are conducted on an entirely new aircraft.

But that's certainly not news that is going to please Airbus's airline customers, who are already moaning about soaring fuel costs. German national carrier Lufthansa, a major Airbus customer, is already estimating internally that the A380 will consume 14 percent more fuel than Airbus has officially disclosed.

With reporting by Dinah Deckstein and Ulrich Jaeger.