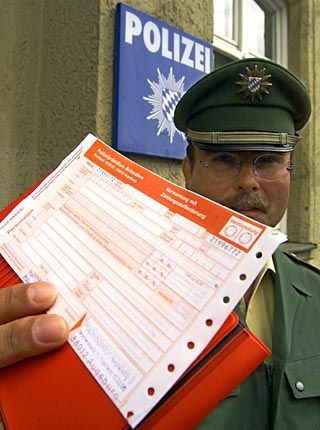 Got diplomatic immunity? Then this parking ticket isn't worth the paper it's printed on.

A state visit to Berlin seemed like just the thing to improve Kazakhstan's bruised reputation after the release of the satirical movie "Borat." President Nursultan Nazarbayev visited Berlin for two days in early February, presenting central Asian folk music in front of the Brandenburg Gate and chatting to Angela Merkel in the chancellery. In the evening, after a few glasses of schnapps, the guest entertained his German audience in the historic Citadel in Spandau near Berlin with song and dance until well into the night.

Meanwhile two members of the Kazhak delegation had their own entertainment schedule for the day, seizing the opportunity to take a casual stroll through town. Thirty-year-old Rysgul K. attracted a saleswoman's attention in a "Zara" boutique near the Kaiser Wilhelm Memorial Church in west Berlin -- the customer was slipping a pair of ladies' shoes into her plastic bag. After the police had been called, they took the Kazhak woman and her companion, 42-year-old Jergerly S., along to the station -- where they were collected by an official from the Kazhak embassy. "The delegate had always intended to pay for the goods," said the embassy in an official statement.

Shopping for free involves no legal consequences for the roughly 6,000 diplomats in Berlin and their families. Protected by diplomatic immunity as guaranteed under international law, members of the diplomatic service have all sorts of options not available to others. They can ignore red lights without fear of being fined, race through a speed trap drunk, bully the maid or refuse to pay the workman's bills.

Berlin's public prosecutor's office registered about 100 such offenses last year, including theft, traffic violations, fleeing the scene of accidents, and inflicting bodily harm. No one is keeping precise statistics. Those who get caught need only show their red diplomatic passport to get off scot-free in most cases.

The maximum penalty a diplomat can receive is to have to return to their home country, as was the case with one Mongolian, who had to leave Germany in 2004 when his involvement in cigarette smuggling here was revealed. Dresden's customs investigation office investigated Mongolia's Berlin mission, which they described as the "fulcrum and organizational linchpin" of a criminal enterprise: More than 20 million untaxed cigarettes had been smuggled in, declared as Mongolian diplomatic mail.

Drunk driving is no problem for diplomats either -- at least not a legal one. When Bulgarian ambassador Nikolai Apostolov careered through Berlin in his car in 2004, he was stopped by the police. When the ambassador refused to step out of the car, a police officer reached through the window and removed the car key. But the man from Sofia swiftly reached into his jacket pocket, inserted his second key and sped off. "Our colleagues aren't even allowed to give drunk diplomats a breathalyzer test," complains Eberhard Schönberg, chairman of Berlin's police union (GdP).

The German Foreign Ministry has also had to deal with a series of complaints from maids. "We point out to the diplomatic missions that domestic employees are subject to social insurance contributions in Germany," a ministry spokesperson says. But that doesn't help much. Diplomats have a preference for employing Filipinos: They speak English and have a reputation for being undemanding and cheap.

The women often have a 24-hour workday and are "treated like slaves," says Nivedita Prasad from the anti-human trafficking aid organization Ban Ying, which attends to the complaints of many Filipinos. Esmeralda T. from Manila, for example, demanded her wages for several months of cleaning, washing, childcare and giving pedicures to her employer's wife -- a total of €7,000 ($9,216). Instead of the money, she received a mobile phone text message from the ambassador's wife: "Fuck you 7000." Esmeralda T. saved the message along with the number, convincing the Foreign Ministry to believe her version of events rather than that of the ambassador and his wife. After lengthy negotiations, the maid received €3,500 ($4,608) last September.

The Foreign Ministry attempts to solve such cases discretely. For example, the Germans used gentle pressure to make Armenia settle its unpaid bills with Berlin's water provider. In another case, the officials urged the Pakistani embassy to pay a decorator for the wallpaper that embassy members had later requested instead of the paint originally agreed upon. The problem for the aggrieved parties is that "they can only ever ask, they don't have any legal claim," says Berlin-based lawyer Maria Wilken.

The former West German capital Bonn was less sympathetic to its guests -- as are Washington and London today. Parking attendants in Bonn distributed about 16,000 tickets to traffic violators from the diplomatic corps in 1995 alone. To the further chagrin of diplomats, the city even regularly published a "name and shame" list of the worst offenders. Senegal repeatedly got first place -- once by managing to acquire 448 tickets with eight embassy cars. Mexico followed close behind.

Such methods are considered too bourgeois in liberal Berlin, which replaced Bonn as the seat of the German government in 1999. The city, famously described as "poor but sexy" by its charismatic mayor Klaus Wowereit, prefers to give carte blanche to ambassadors.

There is no statistical record of the tickets acquired by ambassadors in Berlin. Neither the police nor the office of Berlin's Interior Secretary Ehrhart Körting can cite figures on tickets or fines. "Everything is swept under the carpet here," says Schönberg. "If in doubt, our officers are expected to politely escort drunk drivers back home."

Word has already spread among criminals about the privileges diplomatic immunity brings. The Foreign Ministry recently alerted the Berlin judiciary to the growing abuse of diplomatic titles.

It seems like everybody wants one of those nice red "get out of jail free" cards these days: Senior prosecutor Karlheinz Dalheimer warns that "counterfeit diplomatic passports have been a major problem recently."