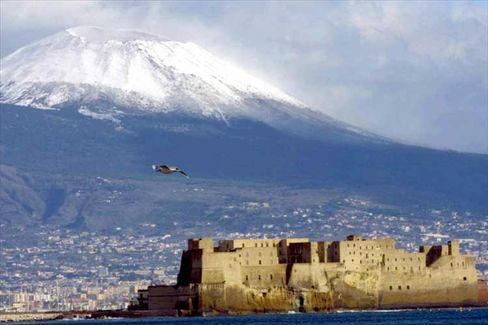 Mount Vesuvius towers over the Gulf of Naples in southern Italy. It is considered one of the most dangerous volcanoes in the world.

"Gentlemen, we have to prepare for the worst," says Franco Barbieri in his Italian-accented English. The researchers in the room know exactly the implications of what the Italian researcher is telling them.

The ground south of Mt. Vesuvius has been shaken by tremors 52 times during the last 24 hours, Italy's leading volcanologist explains. Three hundred tons of sulfur dioxide have spewed out of the crater. Other ominous signs of an impending catastrophe are mounting: The coast guard has sighted gaseous bubbles in the sea, and dead fish are floating on the waves. The water in the boroughs of Ercolano and Torre del Greco tastes sourer and sourer. And, as if that weren't enough, GPS stations have observed that the ground in the region is rising -- by no less than 20 centimetres (8 inches) in a single day.

"No doubt about it, the magma is rising," Barberi concludes. Giovanni Orsi, his colleague from Naples, is especially concerned about the crevices that are opening up on the slopes of the volcano. "We have no time to lose," he says.

The experts had met here, in the strategy planning room of the emergency management center in Naples, three days earlier, in mid-October. At that meeting, the scenario Barberi presented was even worse: An earthquake measuring 4.2 on the Richter scale had destroyed entire residential neighborhoods at the foot of Mt. Vesuvius. Forty-five people were dead and 11,400 homeless.

And yet, on that day, the scientists still felt there was room for optimism. The mountain itself hadn't been active yet and the seismic waves hadn't indicated rising magma. The GPS data was likewise not out of the ordinary.

But the optimism is gone now. Barberi speaks of a "dramatic acceleration of events." The evacuation has to begin immediately, he says -- tonight. Everything else needs to be decided by the Italian government in Rome.

For a moment, everyone in the room is tense and silent, terrified of the prospect of having to depopulate an entire region. Almost as bad, though, is a scenario where, after the evacuation, the volcano doesn't erupt at all.

The emergency evacuation plan for the Bay of Naples.

No time to lose

Meanwhile, in the observation room of the Osservatorio Vesuviano -- the world's oldest volcanological observatory -- the seismograph is quietly drawing its curves on the observation monitors. The geologist on duty, Flora Giudicepietro, takes a look every now and again, but doesn't notice anything unusual -- "except for a tiny tremor measuring 0.9," she says. "But we have more than 100 of those every year."

Wednesday's devastating earthquake didn't register on any of the monitors. Giudicepietro only learned about it a day later. "Vesuvius is communicating with no one right now, except for the director," she jokes.

Most days, Vesuvius is just a 1,281 meter (4,203 foot) rock dome rising imposingly above the Gulf of Naples. It's the mountain on whose slopes the famous Lacryma Christi grapes grow. Two sciences were born in its shadow: volcanology and archaeology. But it's also the mountain that's considered the most dangerous volcano on the planet: Nowhere else on the planet do so many people live in the death zone.

But when scientists talk about Vesuvius these days, they mean a different mountain -- a virtual volcano. Its moods are determined by a three-person research team consisting of Mauro Rosi from Pisa, Roberto Scandone from Rome and Lucia Civetta from Naples. The three experts have come up with a scenario representing one of several ways in which the volcano might awaken.

The relevant data is sent to the crisis management group by email. Then -- as part of the most comprehensive disaster simulation program in Italian history -- authorities from the government, local municipalities, electricity, gas and water providers, and also road operators and telephone and train services, decide just how to react in the case of a violent eruption. "An eruption of Vesuvius has the potential to become the worst disaster in modern times," says Giulio Zuccaro, whose job it is use the seismic data provided by the three volcanologists to calculate the likely damage to houses and streets.

Some 55,000 people live by the foot of Vesuvius -- in towns that have crept farther and farther upward along the volcano's fertile slopes during the past decades. Hardly any other region of Europe is as densely populated -- and construction work is ongoing. Fifty thousand new buildings were built here during the past 20 years -- even including a hospital in the town of Torre Annunziata. As recently as the 1980s, the government was still resettling earthquake victims from the Naples region here, of all places. The refugees were given new homes in the red zone, where the danger from an eruption is most acute.

"The worst disaster in modern times"

The longer the volcano slumbers, the more awareness of its dangers wanes. It is only the oldest citizens of Boscoreale who still remember the bloodied US soldiers who had been pelted by rocks launched from the volcano's crater in 1944.

Scientists are convinced that next time it will be a lot worse. Confidence in their predictive abilities has grown as they have gradually surrounded Vesuvius with an ever more sophisticated network of measuring devices. It is now the most closely watched volcano on the planet.

Seismometers register every tremor of the ground. Gravimeters respond every time the rising magma leads to a miniscule up-tick in gravitational force. GPS stations can detect whether the mountain itself is rising. Instruments measure the amounts of carbon dioxide and sulfur oxide that rise from the crater, as well as gaseous releases deep beneath the Bay of Naples.

In addition to the gadgets, though, analyses of rocks, archaeological findings and historical records also help scientists understand more about how the volcano behaves. The most well-known historical sources are the two letters the Roman statesman Pliny the Younger wrote to the scholar Tacitus in 79 AD. On the afternoon of Aug. 24, Pliny the Younger was in the military harbor of Misenum, not far from Vesuvius. From there, he watched a cloud rise from inside the volcano: "I can best describe its shape by likening it to a pine tree," Pliny wrote. His uncle, Pliny the Elder, joined the naval rescue mission. "Ash was falling onto the ships now, darker and denser the closer they went. Now it was bits of pumice, and rocks that were blackened and burned and shattered by the fire. Now the sea is shoal; debris from the mountain blocks the shore."

What Pliny the Elder saw the following morning was even more terrifying: "frightening dark clouds, rent by lightning twisted and hurled, opening to reveal huge figures of flame."

Archaeologists later confirmed Pliny's report. Dust fell from the sky for many hours following the eruption, until the city of Pompeii, located at the foot of the mountain, was covered with a layer of ash and pumice more than two meters thick. Then, suddenly, the town ceased to exist: Suddenly, a searing hot gas cloud shot down from the mountain. All life in the city was burned to a cinder within seconds.

It's these so-called pyroclastic streams that disaster planners fear most: When the flow of gas and rock released by the volcano during an eruption lessens, the column of gas, ash and dust collapses in on itself and comes crashing down the slope. Such flows in the past have been measured at several hundred kilometers per hour.

Geologists found evidence for eight mighty "Plinian eruptions" in the rock layers of Vesuvius -- all within the past 25,000 years. Firestorms such as those described by Pliny raced across the land each time. Afterwards, the volcano always behaved relatively peacefully, as if exhausted by its explosive act of violence. Instead of scalding explosions of ash and gas, it spouted mostly viscous lava.

The last few centuries were one such phase of relative tranquillity. The last major eruption was in 1631 when some 4,000 people lost their lives. Lava has snaked down the slopes in some 20 minor eruptions since. While the lava flows sometimes destroyed entire villages -- as in 1944 -- residents always had enough time to make their escape. The feared pyroclastic streams made themselves scarce.

But Vesuvius has been slumbering for 62 years now -- and that's a bad sign, according to the volcanologists. After all, each of the volcano's major eruptions occurred at the end of such a calm period. The rule of thumb seems to be: The longer the volcano remains outwardly peaceful, the worse the disaster being prepared in its innards.

Still, the scientists hope to be able to decode the warning signs early on. "The next major eruption is sure to happen," says Giovanni Mecedonio, the Osservatorio Vesuviano's director. "But we'll see it coming months or even years ahead."

During the mid-1990s, emergency managers tried to forge a "National Emergency Plan for the Vesuvius Region," based on what scientists now know about the volcano. The proposal was widely mocked. It involved the complete evacuation of the area's population: A total of 81 ships, 4,000 buses and 40 trains were to help all 586,417 inhabitants of the red zone make their escape. The refugees would then be resettled all over Italy on the basis of a complex formula.

But what about all those who don't want to leave their homes? What if roads are torn open, bridges shattered and rail tracks bent out of shape even before the eruption itself occurs? And is a warning period of one week even realistic? Who's responsible if everyone is really evacuated and the volcano doesn't behave in the way predicted by the scientists? 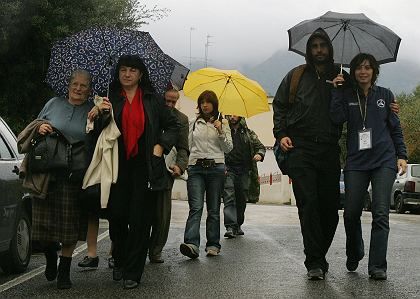 An evacuation drill under heavy skies.

These kinds of concerns led to the development of a simpler and briefer plan. Designed to test the cooperation between the authorities, it was the basis of the disaster simulation program conducted in mid-October. Buses are now considered the only vehicles suitable for use in the evacuation. Everything is supposed to happen in just three days. Nor is the idea of dispersing the evacuated residents all over Italy part of the evacuation scheme any longer. The intention is now to erect temporary shelters in the region.

The spectacle staged by the emergency team during the disaster simulation toward the end of last month was indeed impressive. They set up tents, mobile hospitals and mobile cafeterias. Men in day-glo yellow or bright red clothes bustled about excitedly. The men from Rome -- dressed less conspicuously, in blue -- gave orders on their walky-talkies.

The only ones who caused problems were the locals. At one point, the busy helpers from the emergency team were expecting 300 of them at the emergency station in Nola, to the north of the volcano. But only 151 residents stepped out of the six buses. "The weather's too bad," a local member of the emergency team explained apologetically. "I'm sure more people would have come if the sun were shining."

"Vesuvius does what it wants anyway," says Luigi Grimaldi from the town of Boscoreale. It was the same 62 years ago, he explains: No one was expecting an eruption then. "I was sitting in the cinema when pumice started raining down on the roof all of a sudden," he remembers. "The film was called 'La corono diferro' (The steel crown). Gino Cervi played the lead role."

Meanwhile, there's plenty of talk about "alarm" and "emergencies" in the Naples press. But the journalists aren't talking about Vesuvius -- they're talking about trash.

Stinking mountains of waste lie piled alongside city streets everywhere. The dumping grounds are filled to capacity. When asked to explain, the locals reply with just one word. "Camorra," they say -- the name of the Neapolitan counterpart to the Scilian mafia. There's really only one solution to the problems here in Naples, the people say. And then they point into the distance, where the silhouette of Vesuvius shimmers in the fog.