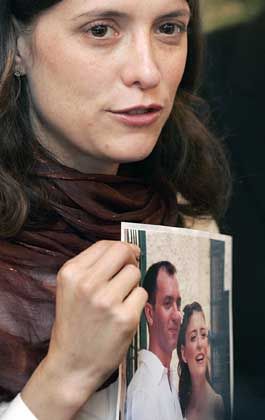 A wedding photo of Israeli reservist Ehud Goldwasser, held by his wife, Karnit (also pictured). Goldwasser and another Israeli soldier, Eldad Regev, are still prisoners after their kidnapping by Hezbollah in July.

It's hard to keep secrets at the United Nations's New York headquarters. The building on the East River is called a "gossip shack" even by sympathetic diplomats, the ones who turn up for lunch in the elegant delegates' lounge and swap sensitive internal information over a meal and a view of the water.

Not everything gets gossiped about here, though. An elite circle of confidantes around UN General Secretary Kofi Annan has been utterly silent about one of the world body's most sensitive recent missions -- negotiations in the ongoing hostage drama between Israel and Hezbollah. One special emissary is "a European," Annan admitted in September, though he refused to give a name.

For good reason: The unknown quantity in back-room talks for the freedom of Ehud Goldwasser and Eldad Regev, two Israeli soldiers kidnapped by Hezbollah in July, is an officer of Germany's intelligence service, the Bundesnachrichtendienst, or BND.

On July 12, the kidnapping of Regev and Goldwasser at a checkpoint on Israel's border with Lebanon sparked a month-long war between Israel and the heavily-armed Shiite militia. The soldiers' freedom is a condition of UN Resolution 1701, which ended hostilities. Annan and his aides hope a deal will build a modicum of trust between the two parties and avoid a fresh outbreak of hostilities.

The German analyst is known as "Mr. Hezbollah." He lives in Berlin and speaks fluent Arabic, English, and French. He was educated as an Arabist, and he has qualifications which neither high-level diplomats nor seasoned statesmen can offer, in the eyes of the UN leadership. Since he's taken part in previous German-negotiated prisoner exchanges, he knows the bizarre rules of hostage-trading as well as the main people involved. The German government has twice been a successful mediator between Hezbollah and Israel, and the work is as delicate and demanding as it is prestigious.

The difference this time is that the new talks, technically, shouldn't be happening. Last year BND chief Ernst Uhrlau threatened Hezbollah that the German wouldn't be available if the militia tried to use kidnappings again as a negotiating tactic. The German government would rather not get involved in an endless cycle that could both harm the prospect of peace in the region and tarnish Germany's latter-day image as a peacemaker.

This is exactly the scenario that began to unfold, though, when elite members of Hezbollah kidnapped Goldwasser and Regev in July. The German government was then appropriately reserved when a spokesman for Israel's Foreign Ministry, Yigal Palmor, openly asked for negotiating help. "Right now the same officials from Germany would be useful again," he said.

Both Uhrlau and German Foreign Minister Frank-Walter Steinmeier have long downplayed Germany's role as official mediator in this crisis. "We're not in that kind of situation," Steinmeier has said. At the same time Berlin would "not turn down" an official request, and after a number of indications from Annan's office that the Secretary General wanted to get involved personally, Berlin arranged a meeting between the BND officer and the UN leader.

Near the start of September, Annan and the German agent met in Madrid. It was cast as an introductory meeting, but Annan was impressed, and afterwards "Mr. Hezbollah" had a UN assignment.

Very few people have more experience than the German intelligence officer. "Mr. Hezbollah" has been present at almost every previous negotiation involving Hezbollah, and he's met Hassan Nasrallah personally. He enjoys a good reputation in the Hezbollah's Beirut headquarters as well as in Israeli Prime Minister Ehud Olmert's office.

Since he's been stationed in German embassies in Beirut as well as Damascus, the officer also knows how to deal with official Syrians. He was part of a delegation drawn from five German agencies which in November 2002 questioned the German-Syrian Islamist Mohammed Haydar Zammar in a torture-prison in Damascus.

For weeks the German emissary has been shuttling between Jerusalem, Beirut, and New York to probe the conditions for an exchange of prisoners. Whether he can succeed is another matter -- positions on both sides have hardened, and hatred between Israel and Hezbollah runs deep.

The Israelis, who have openly threatened Nasrallah with death, so far aren't prepared to release hundreds more of prisoners for the freedom of two soldiers. (Israel agreed to release over four hundred prisoners -- mostly Palestinians -- in a difficult German-brokered in January 2004.) Hezbollah, on the other hand, has placed at the top of their list of prisoners to be released is Samir Kuntar, a Lebanese man who's been jailed by Israelis for 27 years. Kuntar killed a four-year-old girl and her father in 1979; in Israel he's considered an enemy of the state who should never again be free.

Even if the current negotiations fail, though, the mission will already count as a success for the German government. Any failure in talks will lie at the UN's feet, but a success will bring at least some credit back to Germany.