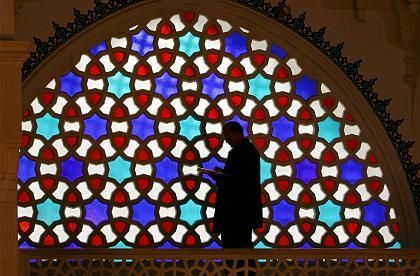 A man praying in a Berlin mosque. The number of Muslim converts in Germany increased fourfold last year.

In terms of his appearance, Kai Lühr seems out of place. Lühr, who is kneeling between bearded men in white robes and bowing in the direction of Mecca, is clean-shaven and wearing jeans and a gray jacket. He might pass as a member of the Christian congregation next door, sent here to cultivate inter-faith dialogue. But he clearly knows the Islamic prayer ritual too well for that to be the case. He bends over and prays in Arabic: "Allah listens to him who praises Him. Our Lord, to You is due all praise." Lühr bends over, stands up again, takes another bow -- up and down, 33 times.

Kai Lühr, a practising doctor, converted to Islam with his wife two and a half years ago. Since then their names have been Kai Ali Rashid and Katrin Aisha Lühr. The 43-year-old regularly attends Friday prayers in the courtyard mosque in Frechen, near Cologne, where he prays together with Moroccans, Palestinians and two other German converts -- a former boxer and an engineer. "You'll meet a few German-born Muslims in any mosque these days," says Lühr.

A soon-to-be-published study on Islamic life in Germany confirms the Cologne doctor's impression. The study sheds light on a phenomenon that may seem surprising given the image of Islam in Germany, where the religion is often associated with terrorism, forced marriages and honor killings: In Germany, some 4,000 people converted to Islam between July 2004 and June 2005. The study, which was financed by the Interior Ministry and carried out by the Soest-based Muslim institute Islam Archive Germany, reveals that the number of converts increased four-fold in comparison to the previous year.

The figure of 4,000 conversions means the usual explanations for why Germans convert are no longer sufficient. The annual number of converts remained constant -- at about 300 -- until three years ago. The converts were mainly women "who married a Muslim partner," Muhammad Salim Abdullah from the Islam Archive points out. Today, people are increasingly converting "of their own free will," he says, adding that the converts still include many women, but also plenty of university graduates -- middle-class citizens like Kai Lühr.

Baptized and raised as a Christian, Lühr studied at university and then opened a general medical practice with an additional specialization in naturopathic medicine. His income was good, he married Katrin, a professional dancer, and they moved into a loft apartment together. However, at some stage the couple realized something was missing. "When critically-ill people come into my practice after already having been sent from pillar to post, it makes you despair sometimes," Lühr says. He developed an interest in Christianity, Buddhism and the Dalai Lama. But he found no answers.

"People want to be different."

Lühr's conversion process seems typical. Many converts were originally practising Christians who began having doubts about their religion at some point, says Mohammed Herzog, a Berlin imam who used to be a Protestant minister until he converted to Islam in 1979. The number of German-speaking converts in his mosque has also risen noticeably, Herzog says. Some 10 years ago, the annual number of converts was about 50 -- now it is double that. "Only rarely do the converts include people who were complete atheists before," Herzog says.

Monika Wohlrab-Sahr, a sociologist of religion, has investigated converts in Germany and in the United States. She says the "overcoming of a personal crisis" is often a prime motive, frequently in combination with a search for the Other: "People want to be different," she says.

While fundamentalist Christianty also offers these possibilities, Islam allows a person to stand out from the crowd to a greater degree, in Wohlrab-Sahr's opinion. Moreover, Islam has become a perennial theme in the media thanks to today's frequent debates on Muslims. "Islam is more visible as a genuine alternative," Wohlrab-Sahr says.

It's hard to find a common denominator for what exactly makes Islam so attractive to people from a Christian background. Salim Abdullah speaks of "defiant reactions" in the face of the constant criticism brought against Islam, although he's also familiar with converts who appreciate the "clear rules for behavior" provided by the Koran. Lühr, who always carries a prayer mat in the trunk of his Alfa Romeo GT, laments the "decline in values" that Western society, in his view, has suffered: "In Islam, values still count for something," he says.

Sometimes the newly-acquired Muslim values can clash with Western principles, in the opinion of some. The key question is how literally Islam's holy book is interpreted. "Converts tend to practise their religion in a more puritanical fashion," says Wohlrab-Sahr. "Born Muslims are often more liberal."

A Hamburg lawyer's office provides an intriguing example of what she means. Thirty-six-year-old Nils Bergner prays to Allah five times a day. The German convert works together with a Turkish friend Ali Özkan, also a Muslim. The two visit the mosque together, but it's only in the German's office that the prayer rug is regularly rolled out. "I just can't manage it," says Özkan. "The first prayer is at 6:00 a.m. -- much too early."

Recently, they were invited to dinner. The desert was tiramisu. Bergner hesitated because of the alcohol in the recipe. "I said, you can't be serious," Özkan recalls. "Go ahead and eat it, I said. It's just a flavoring." But Bergner left the tiramisu untouched.