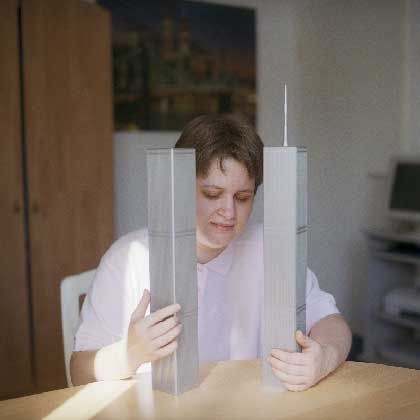 Sandy K.'s relationship to the Twin Towers is somewhat unusual.

Nov. 9, 1989 was a terrible day for Eija-Riita Eklöf-Mauer. A rampant horde stomped on her husband in Berlin, mauling him with hammers and tearing entire chunks out of his body. "With the emotional bonds, deep love, good memories together with him ... the only way to survive is to 'block' this terrible event," the traumatized Swedish woman wrote on her Web site years later.

On Sept. 11, 2001, Berlin resident Sandy K.'s beloved was publicaly executed on the streets of New York. The scenes and dates of the two crimes may be far apart, but what unites the two women is a strange and obscure obsession.

Back in 1979, Eklöf tied the knot with the Berlin Wall and legally changed her name to mark the occasion ("Mauer" means "Wall" in German). Ever since she was eight years old, Sandy K. was hopelessly in love with New York's Twin Towers. Neither of these two monumental lovers were known for being particularly talkative. Nor did they seem to be blessed with qualities of seduction. But to their admirers, the buildings were male, sexy and extremely desirable.

For 25-year-old Sandy, the attraction to things is so overpowering, she confesses: "When it comes to love, I am only attracted to objects. I couldn't imagine a love affair with a human being."

Her radical renunciation of love between two people didn't turn the young woman into a loner. She gained admission long ago to a circle of like-minded people, all of whom have devoted themselves to the love of things. They call themselves objectophiles or objectum-sexuals. Experts are now faced with the task of interpreting the phenomenon.

The retired professor and former director of Frankfurt University's Institute for Sexual Science, Volkmar Sigusch, is one person who believes he has unraveled the mysteries of objectophilia. He has extensively probed this attraction to objects as part of his research into various forms of modern "neo-sexuality." The sexologist views this inclination as proof of his hypothesis that society is increasingly drifting into asexuality: "More and more people either openly declare or can be seen to live without any intimate or trusting relationship with another person," Sigusch says, adding that cities are populated by an entire army of socially isolated individuals: "Singles, isolated people, cultural sodomites, many perverts and sex addicts."

"We're by no means just straightforward fetishists," Joachim A. insists, and he immediately explains the difference: "For some people, their car becomes a fetish which they use to put themselves in the limelight. For the objectum-sexual, on the other hand, the car itself -- and nothing else -- is the desired sexual partner, and all sexual fantasies and emotions are focused on it." 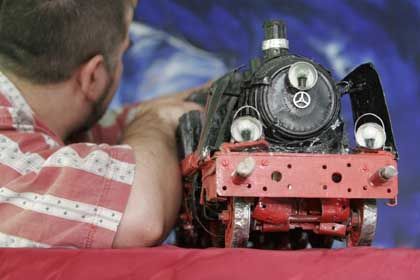 Joachim A. has been pretty faithful to his steam locomotive recently.

The 41-year-old recognized and accepted his inclination when he was just 12 years old. It was then that he fell head over heels "into an emotionally and physically very complex and deep relationship, which lasted for years." His partner back then was a Hammond organ -- he has now been in a steady relationship with a steam locomotive for several years. Since he is particularly aroused by the inner workings of technical objects, repair jobs have often led to infidelity in the past. "A love affair could very well begin with a broken radiator," the now monogamous lover says, remembering how his earlier affairs began.

True, the outward shape of the lover can pose problems for the consummation of the partnership. But those problems are solved in a highly pragmatic way by most objectum-sexuals: Sandy K. had a model of the Twin Towers manufactured on a scale of 1:1,000. The façade consists of anodized aluminium, just like that of the original -- "so that the model feels true to life." The metal miniature has another tangible advantage: It doesn't rust when Sandy K. takes "a pleasant bath with it."

Psychology student Bill Rifka -- who is 35 and in a relationship with an iBook -- admits he has "often flirted with many a sweet laptop on eBay and felt true desire." Like all objectum-sexuals, Rifka also attributes a clear gender to his partner: "To me, my Mac is male. I'm living in a homosexual relationship, so to speak."

Bill Rifka shares his homoerotic inclination for objects with 41-year-old Doro B., who fell for a metal processing machine while at work and "immediately sensed a female presence." The machine has been enticing her with its "sweet hum" ever since. But sometimes it also makes Doro worry: "My sweetie had one of her tantrums and junked her measuring appliance," she noted fearfully in her online journal.

In everyday life, Doro has to limit her displays of affection "to pecking and caresses -- then it's not so bad if someone sees." When she's home and wants "more," she takes out a component or a model of her playmate. But, she adds, "that's not a substitute; it's more like a supplement. That's why it doesn't count as cheating. The model serves as a kind of fax machine that conveys my feelings to my beloved."

Sexologist Sigusch doesn't want to classify such odd behavior as pathological. "The objectophiles aren't hurting anyone. They're not abusing or traumatizing other people," he judges. And then he asks mildly: "Who else can you say that about?"