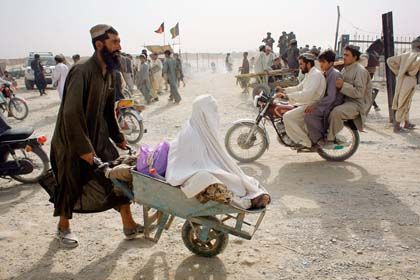 Porous frontier: Security on the border crossing between Spin Boldak, Afghanistan and Chaman, Pakistan is weak and thousands make the crossing every year, including the Taliban.

To understand the war in Afghanistan, one must go to Pakistan. There, in Quetta, the leaders of the Taliban find safe harbor. Afghan President Hamid Karzai claims Taliban leader Mullah Omar is living there.

Quetta is located in western Pakistan. It is the capital of Balochistan, the largest and poorest of the Pakistani provinces. Somewhat like a lunar outpost, the 800,000-resident city is situated at an altitude of nearly 1,700 meters between the sand-brown peaks of Chiltan, Takatoo, Mordar and Zarghun. Quetta originally means "fort," and it has always been just that: a fortress, where opposing forces are battling for regional hegemony.

Quetta is considered the center of terror and resistance against the Americans and their allies -- the "occupiers" of Afghanistan. In the backrooms of radical parties and in the white-washed mosques whose towers spiral decoratively skywards, the elite of the holy warriors meet regularly to organize their comeback. Right out in the open streets -- between the market stalls with pomegranates and dates, the currency exchanges and the vats where meat and beans steam on open fires -- the Taliban recruit the holy warriors who will blow themselves up as suicide bombers in Afghanistan.

Quetta is also home to the "Command and Staff College," the elite school of the Pakistani military and the headquarters of the Frontier Corps of Balochistan with some 40,000 men. Both embody the power of the Pakistani General President Pervez Musharraf, America's most important regional ally in the war on terror.

What may seem like a contradiction -- the co-existence of extremists with the Pakistani government in the same place -- is perhaps best explained by a visit to the Shaldara Koran School in the Pashtunabad slum. Roughly 700 children of penniless parents receive a free religious education here, most of the time by memorizing the Koran in didactic lessons. Western intelligence services consider the madrassa to be one of the secret headquarters of the Taliban. Indeed, school director Maulana Noor Mohammed openly supports the jihad in Afghanistan.

His office is situated along a dusty downtown alley, a room in a narrow courtyard. The Sharia teacher is sitting bare-footed and cross-legged on a floor pillow; he is wearing white harem pants and a white shirt, his turban is as white as his long beard. For over 30 years, Noor Mohammed has been in the business of holy war. He wants to free Afghanistan of the "infidels" and erect a theocracy there. Then the movement will expand to neighboring countries "and finally to the whole world."

A servant brings a tin pitcher with green tea and sets down small porcelain bowls on the worn velour rug. An old-fashioned landline telephone sits on the floor. Men sneak in silently, they kiss Noor Mohammed's hands. 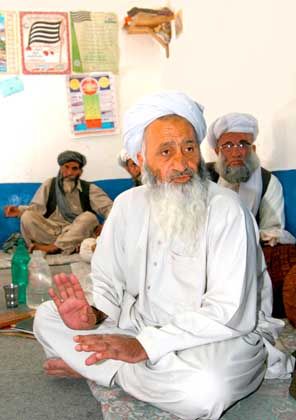 Taliban supporter Maulana Noor Mohammed: The movement will expand to neighboring countries and "finally to the whole world."

Islamic agitators like Maulana Noor Mohammed are not prosecuted in Quetta, as the Afghan and American governments have been demanding for months. On the contrary: He is a respected member of the community. As the Balochistani leader of the radical Islamic party Jamiat-Ulema-e-Islam he belongs to a politically influential alliance of Islamists, the Muttahida Majlis-e-Amal (MMA). When necessary, the MMA mobilizes people on the street against the government and threatens to destabilize the country, which is, after all, a nuclear power.

Mullah Dadullah, 40, the military head of the Taliban in southern Afghanistan was a former student of Noor Mohammed. He lost a leg in the war and organizes terrorist attacks. He deals with "traitors" who cooperate with the Afghan government by chopping off their heads, live on camera. "I am proud of him," says Noor Mohammed.

Under massive pressure from the United States, President Musharraf is now taking action against the Taliban. He ordered the bombing of a Koran school -- allegedly a "terror camp with terrorist activities" and many foreigners -- in the village Chingai on the Afghan border in the tribal region of Bajaur. Among the 80-plus casualties was the school's director, Maulana Liaqatullah Hussain, without a doubt a supporter of the extremists. But the victims also included students and innocent civilians.

After that, 15,000 people protested against Musharraf and the meddling of the US in their affairs, while leading Islamists swore revenge. Since then, the atmosphere in the tribal area has been fervid. "Now more than ever, Bajaur could become Talibanized, as could other tribal areas," says a lawyer who traveled through the region to investigate the incident with colleagues.

Not long ago, the British commander of NATO forces in Afghanistan, David Richards, paid a visit to President Musharraf in Islamabad. Previously, secret intelligence had trickled through: Videos and satellite images show training camps in Pakistan and document how terrorists, with the help of Pakistani security officials, slip through the border into Afghanistan unhindered. Recently imprisoned Taliban fighters testified that they were trained by agents of the Pakistani secret service Inter-Services Intelligence. The message was that the Pakistani president has to prove which side he supports.

Western allies have often demanded this of Musharraf, not always successfully. And the Pakistani president probably has no other choice but to play a double game. If he were to align himself fully with one side -- say, with the West -- then the jihadists could turn against him, plunging Pakistan into a wave of terror. This would also not be in the interest of the West.