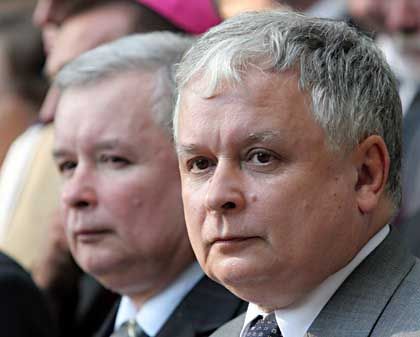 Prime Minster Jaroslaw (left) and President Lech Kaczynski want to revisit the past.

With the second chamber of the Polish parliament currently in recess, Senator Zbigniew Romaszewski sits down in his office under a portrait of Józef Pilsudski. His sable at his side, the moustache-sporting marshal who led Poland into independence after World War I stares out into a cloud of smoke from Romaszewski's cigarette.

The rings under the senator's eyes are a visible reminder of his past hardships. As a dissident, he was arrested several times in the 1970s. "Once in November," he says, "I was taken to a basement cell. Someone opened the windows, and I was forced to endure freezing temperatures for the next 48 hours."

In 1981, when the country's communist government, under General Wojciech Jaruzelski, imposed martial law to stifle the protest movement led by the Solidarnosc trade union, Romaszewski was sent to prison for two years. He fled while on parole, hiding in friends' apartments and establishing the underground Radio Solidarnosc, and repeatedly managed to escape recapture. "But the fear of arrest was terrible," he says. The officer who was in charge of persecuting the dissident Zbigniew Romaszewski embarked on an illustrious career after the communist government was overthrown in 1989. He became a general in the country's border protection force, and later took the position of head of security at PKN Orlen, a Polish oil company. "This is typical of the situation in Poland today," says the senator. "Be it police officers, intelligence agents or judges -- the entire power structure of the communist regime was left untouched."

Romaszewski has joined forces with twin brothers Lech and Jaroslaw Kaczynski, the president and prime minister of Poland, respectively, to fight the former communist regime's networks. A new law designed to illuminate these networks is currently under debate. Under the proposed legislation, secret police files from the days of the communist regime would be opened up for public scrutiny, a process that could potentially expose up to 400,000 officials, political luminaries, teachers and journalists to investigation for their possible role as informers under the old system.

The twins believe that the current practice, in which former secret police connections are examined by the Institute of National Remembrance -- the Polish counterpart to Germany's Birthler Commission, which is charged with investigating the records of the former East German Stasi, or National Security Service -- is much too lax.

The new version of the so-called Purification Law forms the centerpiece of the Kaczynski twins' "moral revolution." The purpose of the new law is not to uncover Stasi connections or identify collaborators and informers, but rather to address and interpret the history of the last 18 years. It also seeks to determine whether the 1989 transition from communism to democracy marked a change in the system, or whether a network of former communists managed to adapt and retain power despite the political about-face.

In the spring of 1989, dissidents managed to negotiate a bloodless transfer of power with the communists. Some would say it was a political tour de force. After all, Soviet troops were still stationed in Poland and the Berlin Wall was still standing at the time.

But the Kaczynski brothers and the supporters of their cause say that the transition was not a coup. They argue that the communists quickly figured out how to regroup and, with the help of the country's intelligence agencies, managed to place their favorites in key positions in the economy.

The twins hope to destroy this network of former party cadres, big business and the Mafia, thereby making good on one of their campaign promises. Not only do they have post-communist careerists in their sights, but also former members of the opposition, such as the group of intellectuals led by publisher Adam Michnik. In their view, Michnik's newspaper, Gazeta Wyborcza, promoted a policy of deliberately glossing over the past for 18 years, thereby enabling the communists to return to positions of power. The term the twins use for the alliance that they believe dominated the Third Republic is "the pact."

They now have promised their fellow Poles a "Fourth Republic," one in which the injustices of the country's transitional period would be eliminated. But critics warn that this could lead to a "culture of total mistrust." They argue that instead of concentrating on the need to further integrate the country into Europe, continuing to repair differences with Germany and addressing Poland's serious unemployment problem (unemployment is currently 15 percent), the new leadership would use the new legislation to indiscriminately dispense with political adversaries and critics.

When Stanislav Wielgus, the Warsaw archbishop-designate, was forced to step down in early January only hours before his ordination, the twins gained additional momentum for their cause. Wielgus had spent years as an informer for the former regime's secret police.

Two weeks ago the magazine Wprost revealed that Poland's former communist rulers may have known in advance of, or were possibly even involved in, the 1981 assassination attempt on the Polish pope, John Paul II. The rumors have only spurred on those Poles who would see the country's recent past harshly dealt with.

"The pact is a loosely knit organization led by leftists and former members of Solidarnosc," says Zbigniew Romaszewski. He claims that these people have acquired tremendous wealth in recent years and have "terribly cheated normal Poles."

To ensure that these people are at least made to suffer in their old age, President Kaczynski proposed a special law last week. The law would require that those who were involved in imposing martial law in 1981 be demoted. This would also apply to Jaruzelski. 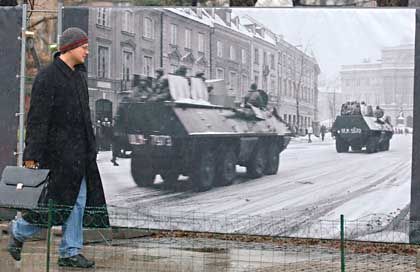 Poland just marked the 25th anniversary of the 1981 imposition of martial law. Here, a young man in Warsaw walks past a photo documenting the event.

For the past 18 years, the general has tried to explain to the Poles that he merely averted the greater evil of a Russian invasion. But this legend has long been refuted. Moscow had no intention of using military force to crush Solidarnosc, and Jaruzelski knew it. Nevertheless, former dissidents like Jan Litynski see Jaruzelski's possible disgrace as nothing but a clumsy attempt to settle old scores.

Going after their own

The Kaczynskis have not even shied away from confronting members of their own administrations as part of their cleanup campaign. Last week, presidential advisor Andrzej Krawczyk was forced to resign under allegations that he worked as an informer for the military intelligence service in the 1980s. Krawczyk insists that he is innocent.

Antoni Macierewicz, a nationalist politician, is the Kaczynskis' most important ally in their battle with the shadows of the past. His job is to clean up the military intelligence service (WSI), which was officially disbanded last fall. Macierewicz plans to submit his report in the coming weeks.

The WSI's agents have been accused of all kinds of nefarious activities, including spying on and attempting to create a rift within the political right in the 1990s. The WSI allegedly employed more than 100 journalists to discredit anti-communist politicians like the Kaczynskis.

Macierewicz is popular with the Kaczynskis, especially now that he emerged triumphant from a conflict with Defense Minister Radek Sikorski when Sikorski resigned last week. Sikorski, a worldly 43-year-old trained at the Washington-based American Enterprise Institute and with a flawless anti-communist record, was in fact one of the government's strongest international credentials. To protect Polish troops in Iraq, Sikorski would have needed a functioning military intelligence service, precisely the service Macierewicz's efforts have helped disband. Instead of shortening Macierewicz's leash, Prime Minister Jaroslav Kaczynski chose to allow the dissatisfied Sikorski to resign.

The Gazeta Wyborcza has quoted an anonymous member of parliament in the Kaczynskis' party as saying that Macierewicz's victory over Sikorski was "shocking," and that the brothers' battle with the past has been reduced to personal purges while necessary government reforms are ignored.

The heroes of Poland's 1989 radical transition are headquartered in a courtyard apartment on Marszalkowska Street. Jan Litynski, already a dissident in the 1960s, an advisor to Solidarnosc and a negotiator at the 1989 Round Table talks, opens the door. A mathematician, Litynski doesn't seem to have ever changed out of the sports coat and thick, horn-rimmed glasses he wore in the turbulent days of 1989.

Despite having spent three years in communist prisons, Litynski has no axes to grind. "Former communist networks and secret police informers who have remained untouched to this day do exist, and we have some cleaning up to do," he says. "But there is no omnipotent 'pact' of the sort that exists in the imaginations of the Kaczynski brothers." According to Litynski, most former communists, in their roles as members of parliament, contributed toward Poland's political and economic opening to the West. Litynski wants to see the government impose a "political amnesty" so that Poland can finally find peace.

"The twins see dark forces at work everywhere they look," complains former Foreign Minister Vladyslav Bartoszevski. Litynski agrees: "Whenever something goes wrong in Poland, the 'pact' is always blamed." Its most important function, Litynski believes, is to expose the architects of the Third Republic -- dissidents like him.

Apparently the tactic has worked. Although the Democratic Party counts both Litynski and the country's first non-communist prime minister, Tadeusz Mazowiecki, within its ranks, it failed to win any seats in parliament in the last parliamentary election.

And while the twins garnered only a 28 percent approval rating in recent opinion polls, only one of every 100 Poles would vote for the Democrats today.