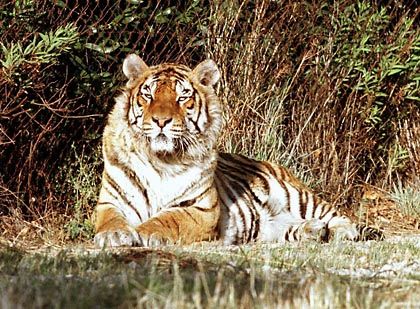 Bengal tigers are dangerous neighbors for people living in the Sundarbans, a lush wetland area of Bangladesh. As the wetland mangrove forests are reduced -- due to both man and rising sea levels -- the tigers' habitat shrinks, pushing them closer to people.

Climate change is driving thousands of animal and plant species into new environments. Now biologists are debating whether it makes sense to help them make the move.

Indian and Bangladeshi fishermen appeal to Bonobibi, the goddess of the forest, before they set out into the swamps. They also send their prayers to heaven to placate Daksin Ray, the tiger god.

But no amount of prayer can deter the Bengal tiger. People are killed by tigers almost weekly in the Sundarbans, the worlds largest mangrove forest, located in the delta of the Ganges and Brahmaputra Rivers. The region is one of the last refuges for Bengal tigers. Though still the masters of the forest, a gas could prove to be the tigers undoing. The gas is called carbon dioxide, and its warming the earth.

The Sundarbans are one of the first ecosystems on earth that could be destroyed by the effects of climate change. According a report by the United Nations Educational, Scientific and Cultural Organization (UNESCO), three-quarters of the region, a World Heritage site, could be underwater by the end of the century. All it takes is a 45-centimeter (1.5-foot) rise in sea levels for the Bengal tiger, also referred to locally as the "man-eater," to become one of the first victims of climate change. And if scientists predictions are right, it will not be the last.

According to a report issued in April by the Intergovernmental Panel on Climate Change (IPCC), 20 to 30 percent of all species would face an "elevated" risk of extinction if the average global temperature rises by more than 1.5 to 2.5 degrees Celsius (2.7 to 4.5 degrees Fahrenheit). And a study published in the journal Nature, concluded that by 2050 up to two-thirds of all animals and plants could be forced to move to new habitats in order to survive.

Given these dire predictions, a hotly debated issue among biologists is whether man should lend a hand, moving species when their habitats become too hot. Or will animals and plants manage to save themselves after all?

"Changes in the climate are normal for animals and plants, and they have always had to adjust to them," argues Munich State Zoo biologist Josef Reichholf.

But others disagree. "Climate change is one of the greatest threats to the diversity of species on Earth," says University of Toronto forestry professor Jay Malcolm. Mark Schwartz of the University of California at Davis agrees: "The magnitude of impending climate-driven extinctions requires immediate action."

Schwartz and a number of his colleagues have published a study that asks a radical question: If certain animals and plants are unable to flee rising temperatures, should we help them? "One obvious solution," Schwartz says, "is to help species at risk move to new environments where they may thrive." The truth is that animals and plants are already reacting to global warming, most of them migrating northward. Butterflies and bats are moving toward the poles. Scarlet dragonflies and praying mantises are becoming prevalent in southern Germany. Ospreys and house martins have begun wintering in the Mediterranean instead of Africa.

These changes are not necessarily a bad thing. "Many species benefit from climate change," says Reichholf. For instance, cranes and bald eagles, both considered endangered or threatened species until now, would encounter better living conditions in a warmer Europe. Pests like the bark beetle are feeling increasingly comfortable in northern latitudes. Elk and wild boar are expanding their range as favorite foods become more abundant.

But biologists calling for quick and decisive action are worried about species physically prevented from moving to new habitats.

If the climate changes as quickly as many scientists are predicting, these species will hardly have enough time to make their way to more favorable climes. In some cases, they will be forced to negotiate rocky and difficult paths. The earth no longer looks the way it did at the end of the last ice age. Cities, agricultural fields and roads dominate the landscape today.

Getting past these hurdles is impossible for many species. "The fragmentation of our landscapes prevents many animals and plants from moving about freely," says Volker Hammen of the Helmholtz Center for Environmental Research in the eastern German city of Halle. "A single major highway is enough to deter some butterflies." 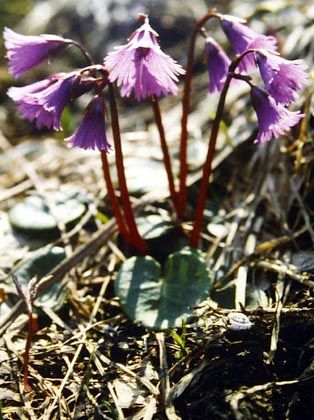 Alpine snowbells thrive at high altitudes and low temperatures. Global warming may leave them with nowhere to go.

Hammen is part of an international project titled "Assessing Large Scale Risks for Biodiversity with Tested Methods." He and other researchers involved in the project warn that climate change could threaten more than half of all European plant species. For instance, they predict a drastic disappearance of species native to the Alps and the Pyrenees. As they flee rising temperatures, plants like red saxifrage are already fighting their way to higher altitudes. But at some point they reach the summit and cannot migrate any further. Glacier buttercup and Alpine snowbell are among the potential victims.

Latin America's golden frogs are another example. Two-thirds of the brightly-colored amphibians have already gone extinct in the last 20 to 30 years, falling victim to a fungus. Climate change escalates the process by providing better living conditions for the deadly fungus in the mountainous cloud forests of Costa Rica and Panama, where average nighttime temperatures are rising.

"Rare species that live in fragile or extreme habitats are already being affected," says Camille Parmesan, an ecologist at the University of Texas in Austin. Parmesan, who has evaluated hundreds of studies, does not believe that species can escape heat-trap habitats simply by adaptation. "To really come up with something new that's going to allow a species to live in a completely new environment takes a million years," says Parmesan. But the problem is that they have only a "few hundred years" to complete the process.

What can be done? Biologists' recommendations range from doing nothing to taking decisive action. The example of polar bears illustrates the dilemma. The shaggy denizens of the Arctic have become icons of climate change. The images, widely publicized in the media, of the giant creatures perched on tiny ice floes suggest that the situation is urgent. But the reality is a different story altogether. Seven of the 12 polar bear populations studied to date are stable or even growing.

This has biologists puzzled. Do polar bears really need ice to survive? Or can they emulate brown bears and hunt on land? 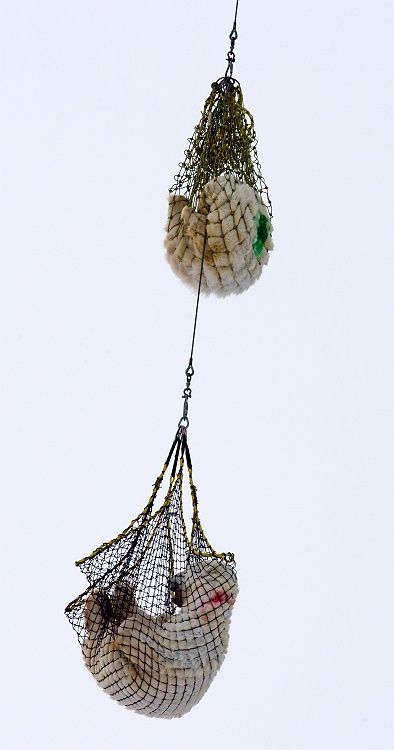 Two tranquilized polar bears are airlifted out of Churchill, Manitoba in Canada. Polar bears head to the icepack near Churchill to hunt for seals every winter. The fate of polar bears in a warmer world is unclear.

Fortunately, no one so far has suggested a massive airlift of the Arctic's polar bears to the Antarctic, where there is still ice in abundance. The predators would presumably commit a bloodbath among the southern continent's nesting penguin populations.

But resettlement is being discussed as a viable option for other species. The endangered Florida torreya tree, for example, leads a sorry existence along the banks of Florida's Apalachicola River. Although there are still about 1,000 torreyas left, the ailing trees are no longer producing seeds. "The torreya is trapped in the river valley," says Mark Schwartz.

But the tree has its supporters. A group called Torreya Guardians wants to see seeds from botanical gardens planted in areas where the species is currently nonexistent. "Why wait?" asks Paul Martin, a professor of geosciences at the University of Arizona.

In the end, resettlement could be the only option to protect the species from extinction in the wild. Besides, a torreya resettlement program could serve as a test case for studying the advantages and drawbacks of a method that could ring in what Martin calls "a radically new era of conservation."

The idea of deliberately resettling animals and plants in new habitats goes against the rules of species protection. Biologists normally shudder at the thought of species being accidentally or irresponsibly introduced into foreign habitats. Cane toads, for example, were originally imported from Hawaii to Australian sugar cane plantations, where it was hoped that they would decimate pests. Instead, the voracious toads embarked on a destructive march through Australian wildlife.

It is examples like that of the cane toad that prompt many scientists to recommend that instead of resettling climate change refugees, we should clear the way so that they can migrate on their own. Agronomist Hammen suggest developing wild animal corridors. The Nature Conservancy, a US-based conservation group, is trying to establish a protected area of grasslands in China's highland Yunnan Province. Alpine forests rarely grow at lower altitudes, and if warmer temperatures drive them up to higher elevations, the protected grasslands could serve as areas where they could reestablish themselves.

Even Schwartz admits: "assisted migration is only a last resort." He also warns against "cowboy environmentalists," who are already "moving around species simply because they think it's a good idea."

"Its going to be a train wreck if we wait for species to start going extinct, then panic and start moving them," says Jason McLachlan of the University of Notre Dame in Indiana. "We need to have the conversation now, because it will probably take a decade to reach some consensus."

Indeed, scientists cannot even agree on the fundamental issues yet. "The debate over climate change completely distorts our perspective," says Josef Reichholf. According to Reichholf, global warming is not a key factor for the extinction of species. "Industrial-scale farming," says Reichholf, "is the No. 1 killer of species." For this reason, he argues, it is questionable "whether climate change can even cause anything to become extinct." Reichholf could be right, at least in the case of the Bengal tiger in the Sundarbans. About half of the forest cover in the region, home to more than 4 million people today, has been eliminated within the last 200 years.

Even without global warming, the tiger is losing his cover.