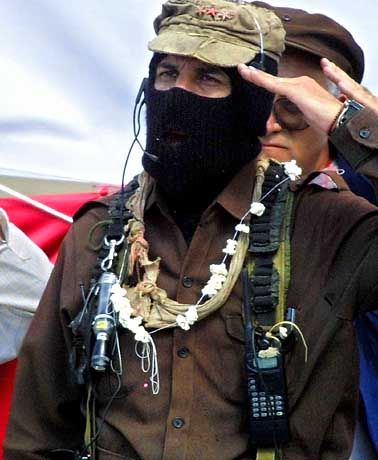 Subcomandante Marcos of Chiapas entered into an alliance with a Muslim movement in the mid-1990s.

Anastasio Gomez, a Tzotzil Mayan from Mexico, fondly remembers his pilgrimage to Mecca. He circled around the Kaaba, the highest sanctuary of Muslims, seven times. At Mount Arafat he prayed to Allah and then he, together with 15 other Indians, sacrificed a sheep before boarding the flight back to their Mexican home.

"In Islam, race plays no role," the young man says joyously. His enthusiasm is understandable. After all, in his home state of Chiapas, Mexico's poorest, the indigenous people are viewed as second class humans, and whites and Mestizos treat the Indian majority as if they weren't there. In the southern Mexican provincial metropolis San Cristóbal de las Casas, the descendants of the Maya even have to move onto the street if a white person approaches them on the sidewalk.

Gomez, 23, converted to Islam eight years ago; ever since then, he has called himself Ibrahim. On his first pilgrimage seven years ago, the Indian was still something of an anomaly. Today, however, Muslim women in headscarves have become a common sight on the streets of San Cristobal.

About 300 Tzozil-Indians have converted to Islam in recent years and it's a development that is beginning to worry the Mexican government. Indeed, the government even suspects the new converts of subversive activity and has already set the secret service onto the track of the Mayan Muslims. Mexican President Vincente Fox has even gone so far as to say he fears the influence of the radical fundamentalists of al-Qaida.

But the Indians have no interest in political extremism. Rather, they belong to the Sunni, Murabitun sect that was founded by the Scotsman Ian Dallas and is seen as an offshoot of a Moroccan religious order. The Murabitun followers represent a sort of primal Islam: Earning interest profits through money lending is a no-no and they preach a literal interpretation of the Koran.

"The see themselves as restorers of Islam," says the anthropologist Gaspar Morquecho, author of a study of the Muslims of Chiapas. "Their defiance of capitalism is similar in many respects to the critique of globalization espoused by many left-wingers." 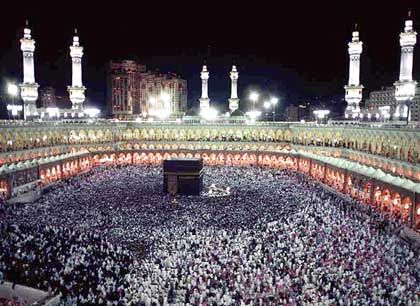 More and more Mayans are finding their way to Mecca.

While the Mayan Muslims in Chiapas have been receiving extra attention of late, the Tzotzil conversion has been underway for some time. In the mid 1990s, a group of Spanish Muslims embarked to Latin America to spread the word; their leader was Aureliano Perez, who is now worshipped by the Maya-Muslims as Emir Nafia. He offered the Zapatista rebels fighting under Subcomandante Marcos, whom Perez supported, an ideological-religious alliance. Marcos was hesitant to enter the odd pact, but the Muslim missionaries were unperturbed: They discovered that the Tzotzil Indians made up the majority of the Zapatista rebels and were quite open to the teachings of the prophet Mohammed.

The battle for the souls of Chiapas is nothing new. In the 16th century, the Spanish conquistadors used brute force to convert the Indians to Catholicism. Half a millennium later, evangelical preachers from the US have turned Latin America into a religious battleground in their efforts to lure Catholics away from the Church. In the town of San Juan Chamula alone -- whose church is seen as something of a spiritual center by the Tzotzil Indians and attracts thousands of tourists a year -- there are 11 different congregations seeking to save the souls of the Indians.

The loss of cultural roots

The Catholics, however, are still, for the most part, in control. They belong to the mafia-esque former state party PRI run the town hall and the lucrative weekly market. In face of the advance of the evangelists, however, they fear that their influence may be waning and they have chased out more than 30,000 protestant Indians out of San Juan Chamula in the last three decades and hundreds have been killed or assaulted. Most of the refugees settled down in the slums on the outskirts of San Cristobal. Cut off from their cultural and religious roots, the Indians are easy prey for all manner of soul-savers.

"In Islam, the Indians rediscover their original values," claims Esteban Lopez, the Spanish secretary general of the Muslim community. "The Christians destroyed their culture." He presents the use and abuse of alcohol as proof. Alcoholism is wide-spread under Tzotzil Indians and the strict ban on spirits in Islam helps many to break the vicious circle of addiction and poverty.

In San Cristobal, the Mayan Muslims run a pizza shop and a carpenter workshop and they are seen by the whites as hard-working and diligent. In a Koran school, children learn Arabic and five times a day they pray in the backroom of a residential building. Empty congregation halls are not a problem for the new Muslims: Converted Muslims vow to witness the teachings of Mohammed among their families.

Anastasio Gomez -- aka Ibrahim -- for example, has managed to convert his entire family. He is especially proud of the conversion of his 100-year-old grandfather who was member of a Christian sect. "He was wandering from religion to religion all his live. Now he has found his peace of mind with Allah," says Ibrahim.