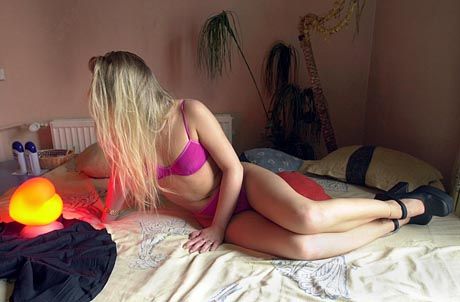 The number of prostitutes in Germany has grown in recent years.

She used to call herself "Angie" and described herself to potential customers as "the buxom blonde from Bochum -- without taboos and available around the clock." She satisfied machos and mama's boys, blue-collar workers and ivory-tower academics, old and young. She learned how to adjust to completely different temperaments and needs. She did it six years long four or five times a day. Then she got pregnant, cancelled her ad in the newspaper and changed her job.

Angie, the whore, became Angelika the care worker for the elderly. Employed by a mobile social care service, the one-time blonde now has short brown hair and has traded her stilettos for sensible shoes. Instead of taking care of their sexual needs, she now helps her customers bathe and change their bandages. "It's easy for me," says Angelika, who just finished her training.

What the woman from Germany's industrial Ruhr Valley managed to do on her own is now being considered by the state of North Rhine-Westphalia as a model for other sex trade workers: off the street and into the old folks home. The novel retraining scheme is being financed with over €1 million in state and EU money.

"It was a logical move," says Rita Kühn from Diakone Westfalen, which runs nursing homes across the country and is organizing the project. According to Kühn, prostitutes have "good people skills," aren't easily disgusted and have "zero fear of contact."

Those are all characteristics that can set them apart from trainee nurses and future care workers, believes Kühn. She is so confident that prostitutes are cut out for nursing care jobs that she wants to offer 30 women the chance to have a new career with two years of courses and vocational training.

For the 56-year-old Gisela Zohren the unusual program comes at just the right time. The former star dominatrix, who works for the prostitute help center "Midnight Mission," is in charge of the project in Dortmund. Founded in 1918, the center has rarely had so much to do. In recent years, she's heard increasing bad news from the red light milieu. Competition has surged at bordellos and among streetwalkers as thousands of women have poured into the sex trade -- and not just from economically depressed Eastern Europe. There are plenty of mothers simply trying to make ends meet, academics who can't find other work, or even schoolgirls trying to make some extra pocket money. 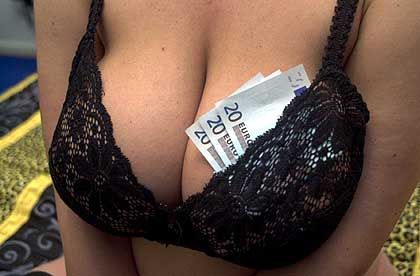 "The job situation is miserable," says Zohren, who estimates there are at least 50,000 prostitutes in North Rhine-Westphalia alone. The hooker surplus has led to a "dramatic drop in prices," meaning a john can get pretty much anything he wants for €30 these days. The only time any real money is to be made is during big events like a recent hunting trade fair in Dortmund.

Zohren says at least half of her clients want out of the sex business and most of them could imagine working with the elderly. She herself was once a successful strict mistress decked out in leather and latex in her own S&M studio, but managed to make the jump herself in the late 1990s. Once she did, she found the wishes of many of her former customers weren't so different from her nursing home work with bedpans and washcloths. She often used to play the role of nanny -- albeit with a whip. "I learned to listen and to convey a feeling of safety," says Zohren. "Isn't that exactly what's missing so much in care for the elderly?"

The whole concept sounds "very coherent" to Heinz Oberlach from Germany's Federal Labor Agency -- especially since there are few sectors that so desperately need new workers like nursing homes and social services. There are some 6,400 vacancies in the sector nationwide, even though Germany's unemployment rate tops 12 percent. And the country's rapidly aging society will only make the problem more acute in the coming decades. "It all fits together like the pieces of a puzzle," enthuses Oberloch. 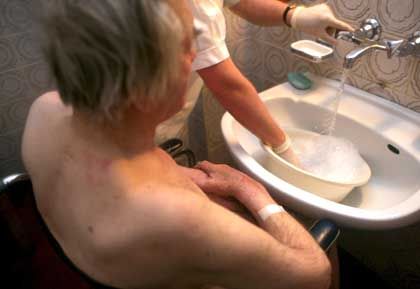 Not easily disgusted? Some think prostitutes have the right skills to deal with the elderly.

In an attempt to alleviate any concerns of potential employers, Zohren and the project coordinators from the cities of Bochum and Münster will go on a road show around the state in the coming weeks. "The people we talk with need to realize that prostitution can offer true qualifications," says Zohren.

Ex-prostitute Angelika is glad that her new colleagues and customers don't know about her past in the red light milieu. She feels "very comfortable" in her new job -- even though she doesn't earn even half as much as she did as Angie the hooker. And due to cutbacks in healthcare, she doesn't have as much time for her customers as she once did. "I used to be able to listen for a good half hour," she says. "But that isn't really possible now."