Adolf Hitler is conceived in a night of wild passion. The country girl Klara wonders why she felt impelled to arouse her already half-asleep husband Alois Hitler and spur him into unusual lust. The couple have never experienced anything like this night in July 1888 before, which is as wild as a "storm at sea." 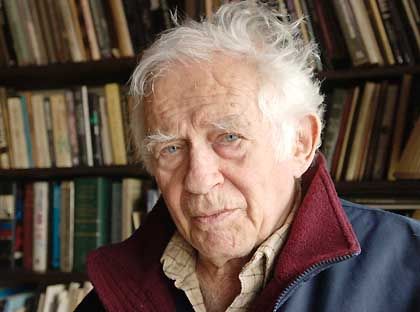 "The Castle in the Forest" is Norman Mailer's first new novel in 10 years.

The author who is here re-imagining Hitler's moment of creation isn't some young writer looking to create a scandal, but rather one of the grand old men of American letters: Norman Mailer. His new book, which hit stores in the United States this week, is titled "The Castle in the Forest," and deals with the formative years of Adolf Hitler.

More than 60 years after the end of Germany's Nazi dictatorship, more and more artists apparently no longer feel any misgivings about delving into every aspect of the life of "Brother Hitler," as German author Thomas Mann once called him. Just as Mailer looks underneath the sheets of Hitler's parents' bed, so German entertainer Helge Schneider portrays Hitler in the bathtub with toy boats in the new comedy "Mein Führer."

But Mailer, who will turn 84 at the end of January, was always good for a surprise, not to mention controversy and provocation. He's been keeping American on its toes for almost six decades, starting with his first novel "The Naked and the Dead" which turned the then 25-year-old into an international star almost overnight when it was published in 1948.

Regardless if he's arguing with feminists, protesting against the Vietnam War, sympathizing with the drug subculture, working as an author, actor or director, failing to become the mayor of New York, or attacking US presidents -- including George W. Bush -- the man likes to make enemies and has retained a strong profile over the years.

He's even been jailed for short periods: once for protesting and another time for attacking his second wife -- who would later write a book about their years together -- with a knife. He has nine children and has been divorced five times. He currently lives with his sixth wife in Provincetown, Massachusetts.

And now Mailer has chosen to take on Hitler, who was born in April 1889, exactly nine months and ten days after that passionate July night described in the novel. Four years ago, in an interview with DER SPIEGEL, Mailer said he was working on an "ambitious book, a very wide-ranging novel," adding that "perhaps it's even beyond my abilities." He didn't even tell his wife what he was writing about, "although she suspects." Apparently the literary bulldozer feared he might be defeated by the difficult subject matter: "It could be the first time," he said.

The novel "The Castle in the Forest" goes far back into the 19th century to tell the story leading up to Hitler's conception, as well as his childhood. It is told from the perspective of a mysterious former SS man, described as tall, blond and blue-eyed, whose "special unit" reported directly to Heinrich Himmler. Now living in the United States -- which he describes as a strange nation -- he writes about his secret missions during World War II and relates surprisingly intimate knowledge of Hitler's family background. Chapter for chapter he discusses Hitler's father, mother, brother Edmund and several others, offering exact dates for births and other events.

So it's hardly surprising that Mailer's wife had an inkling who was to be the main subject of his novel. Mailer is famous for voraciously researching his books. His contemporary John Updike wrote -- not without a certain respectful irony -- that one of Mailer's impressive qualities is the way his interest in a new subject is easily sparked and he quickly becomes an expert.

In a review of Mailer's 1997 novel "The Gospel According to the Son," Updike listed some of the subjects which had already sparked Mailer's interest, including "the ancient Egyptians, the CIA, Lee Harvey Oswald, Pablo Picasso, astronauts, boxers, sex, politics."

The list is by no means complete. There are also the Vietnam protestors ("Armies of the Night"), the double murderer Gary Gilmore, whose story Mailer told based on 16,000 pages of interview notes in "The Executioner's Song," and even Marilyn Monroe. They all became subjects of Mailer's idiosyncratic biographies and novels that mix fact and fiction.

He would even win the Pulitzer Prize for two of these "non-fiction novels" steeped in the tradition of New Journalism: in 1969 for "Armies of the Night" and again in 1980 for "The Executioner's Song."

So it was no miracle that Mailer eventually trusted himself to tell the life story of Jesus in Christ's own voice -- although one possible motivation for writing that might have been that while his Jewish mother was growing up she was called "Jesus murderer" by Irish Catholics in New Jersey. Her son, however, successfully managed to write the memoirs of God's son in a lively and literary way.

Part 2: The Devil in Disguise

"The Castle in the Forest" is Mailer's first major work since "The Gospel According To The Son," which was published in 1997. Now Christ will be followed by Hitler, although not with his own voice. "The fellow is a catastrophe, but that's no reason not to find him as a character and his fate interesting," Thomas Mann wrote about the Führer in 1939.

Hitler himself wanted to keep his origins shrouded in secrecy in order to appear as a political genius who came out of nowhere, sent by destiny. Nobody should know "where I come from and what family I had," he decreed in 1930. His ancestors had humble origins in the wooded area of Austria near the border with Bohemia. His roots were in peasant folk "closely related after generations of in-breeding, giving them a reputation for being backward," as the German historian Joachim Fest wrote in his Hitler biography.

It's still not clear who Hitler's grandfather on his father's side was. Speculation he could have been a Jew from Graz even led Himmler to research Hitler's family tree in August 1942. The rumors may have been inconclusive, but they serve as the basis for Mailer's first-person narration by Dieter, the former SS officer. He recalls how he conducted research in Austria under the orders of Himmler, who is depicted as being fascinated by the topic of incest.

In the novel, Dieter says that he is still obsessed by Hitler, even now when he is living in America years after the war, and says that every German tries to understand the Führer. Right at the beginning of the book, the narrator promises that he is capable of understanding Hitler.

Does Mailer have something new to say about "Adi," as the young Hitler is known in the book? The promises made by the narrator soon prove to be empty, as the man reveals himself to literally be a devil who has possessed the body of a blond SS man. He may not be Satan himself, but he is in constant contact with the "Maestro" and is eventually suspended by him.

He is a devil who, out of pure vanity, attempts to be a writer and is proud to relate Hitler's family history as if he were a "conventional novelist" of the old school. It was he who was present at Hitler's unholy lustful conception, where he fuelled Klara's passion. He climbs into baby Adolf's backside and later gives the boy his dreams. The problem is that not only is the German people absolved of any guilt in the process, but so too is the Führer. In Mailer's account, Hitler had no other choice than to carry out the demon's mission of war, death and destruction. It's all so clumsy and embarrassing that it's not only the uncomfortable closeness to "Adi" which induces a feeling of horror.

Even the few subtle attempts at narrative self irony are mercilessly buried in this over-clever novel -- for example, when Satan in the final pages, in the spring of 1945, expresses his disappointment over the narrator's mission and says that he's switching his operating base to the US.

Wasn't anyone there to stop Norman Mailer? In an interview he blamed the devil for the Sept. 11, 2001 terrorist attacks, saying that the devil had his day there. But what counts in a conversation as a random thought or a metaphor is difficult to accept as the basis for a novel about Hitler. One can't argue about humor in this case either -- there is none in the book.

Even the demonic narrator reveals on the last page his amazement that the reader has stuck with him the entire way. And Mailer? He's said that he'd like to write another novel about Hitler -- by the end of "The Castle in the Forest," the future Nazi dictator has only just quit school.