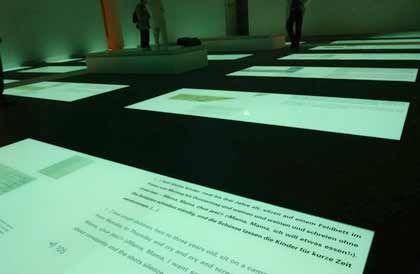 Information Center: "Against the anonymity"

Architect Peter Eisenman, 72, has come up with several explanations that give meaning to a collection of 2,711 concrete stele, each 95 centimeters wide, 2.38 meters long and up to 4.7 meters high and placed with Prussian meticulousness at an interval of 95 centimeters: At times he spoke of "divergence in concept", other times of the "illusion of order" or the "absolute axiality" that had been undermined. Or of the "hegemony of the visual" that had to be overcome.

The interpretations of Wolfgang Thierse, the president of Germany's parliament, are easier to understand: He hopes that a place has been created where it can be grasped "what loneliness, powerlessness and despair mean," a space of "sensuous and emotional power." But is it really possible to sense mortal fear? And how exactly can it be triggered by this mass of concrete, surrounded as it is with the street noise of a busy metropolis?

Right now, there are hardly any signs of such emotions on the 19,000 square meter stretch of land near the Brandenburg Gate smack in the middle of Berlin. The radios of the construction workers are still squawking on the site of the future "Memorial to the Murdered Jews of Europe." The only sign that this site, and with it the whole of Germany, is on the brink of a major event is a small group of men in dark suits: The heads of protocol reviewed the area last Tuesday.

Inauguration of the memorial

With the inauguration of the Holocaust-memorial on May 10th, its construction phase will end, but the debate surrounding a construction that, according to a Bundestag decision, "keeps alive the memory of an inconceivable incident in German history" and should "serve as a reminder to all future generations" is far from over. Head of Planning, Guenter Schlusche, views the memorial as "symbolic cemetery." But the question as to the purpose served by this 28 million object is sure to arise once again when hordes of tourists soon crowd the plastered paths of this virtual cemetery. 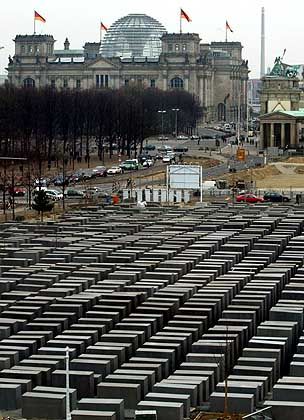 Holocaust-memorial: A field of stele.

One part of the memorial, however, will remain largely free from the eye of the critics: the underground "Information Center" below the field of stele. It is, in fact, these exhibition rooms, realized against Eisenman's will, that make the memorial into a memorial. Even for those who doubt the symbolic value of the concrete blocks above, the confrontation with stories of deportation and annihilation will not fail to have an effect. It's like a punch line of history that the worst crime in German history will be remembered underground -- just a stone's throw away from Hitler's bunker.

A priority for Information Center curator Dagmar von Wilcken, who also designed the exhibition "Jews in Berlin 1938 - 1945" in the Center Judaicum, was "to avoid any kind of show." Indeed, the memorial is not an historical site -- and is not comparable to a memorial on the sites of former concentration camps. As such, there are no possessions of victims or of perpetrators on display. Instead, the curators depend on the effects of images, written and spoken word, light and space.

But total abstention from effects was not possible either: The forms of the stele are reflected in all four rooms. The blocks hang top-down, like extensions of the concrete blocks above ground. Below they serve as information platforms. The pattern of the memorial above ground is also echoed on the ceiling. Thereby, says Wilcken, "the field of stele and the exhibition should fuse into a meaningful unity," -- the depressing historic contents could thereby be aligned with the unusual design of the memorial.

The first thing visitors see on their way into the exhibition are six large portraits, symbolic of the six million Jews murdered -- and a sophisticated interpretation is not required. One portrait shows Zdenek Konas, a boy from Prague who was deported to the nearby concentration camp of Theresienstadt when he was 11 and sent to Auschwitz thereafter. Next to the picture is the word: "Missing."

Her intention, says the designer Wilcken, was to avoid "frightening off" the visitors. And illuminated glass squares sunk into the floor of the "Room of Dimensions" -- a room devoted to providing an idea of the scale of murder -- is a direct result of this philosophy. While the numbers of victims from different countries are on the walls, quotes on the illuminated glass areas create a link to individual fates -- quotes such as this one from the diary of Herman Kruk, written in the Ghetto of Vilnius: "What will life be like even if I do survive? For what and for whom this pursuit of life, putting up with everything, always persevering. For what?" 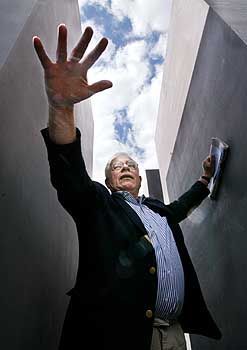 Peter Eisenman has spoken of trying to create an illusion of order.

The attempt to personalize the inconceivable suffering is the main motif of the entire information center. Because only through personalization, Wilcken explains, can the "anonymity of the victims" be overcome. In one part, the fate of individual families are presented with great care, in another the huge deportation routes through the center of Europe are shown. In the "Room of Names," the names of individual victims appear on the walls while their biographical details are piped through the speakers.

To this end, a German-Israeli cooperation was formed -- something that could not be taken for granted as Thierse, chairman of the fund for the construction of the memorial, explains. For the first time, the Israeli memorial, Yad Vashem, opened its data base in which the names of the Holocaust-victims have been collected since 1954. But the foundation of the Berlin memorial wants to go further, and has compared these data with newest research findings and other sources to trace the life and suffering more precisely. It will take years until all known names of victims will be included in the exhibition. When it opens, less than 800 names will have been entered.

Meticulous research was also necessary for the fourth room, which presents an overview of the sites of persecution and annihilation. Countless locations are indicated on a map of Europe and on screens; photographs and films of the terrible era between 1933 and 1945 are exhibited.

Searching for a death camp

The employees of the memorial foundation take care of every detail in collecting the images or texts. Uwe Neumaerkter, for example, went to Poland three times to look for traces of the death camp in Belzec. In 1941, the SS had erected a camp not far from the village's train station. In merely eight months, around 500,000 Jews from the region around Lublin, Krakow and Lviv had been murdered there. But the site was later destroyed by the SS, levelled out and planted over.

Only the naive work of a Polish painter, most probably based on narrations, allows a half-way precise commemoration of the concentration camp with barbed wire and barracks. Neumarkter was able to bring the painting, property of the Catholic parish, to Berlin, to have it reproduced and exhibited it in the information center. 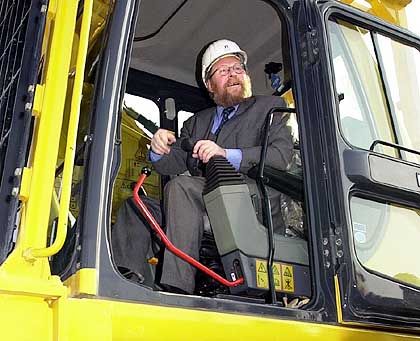 President of Parliament Wolfgang Thierse was closely involved in the planning of the Holocaust memorial.

But historians and curators are not only interested in looking into the past. Soon, in one of the two seminar rooms within the center, a big collection of portraits of survivors will be displayed. Through a co-operation with the Fortunoff Video Archive of Yale University, a number of video documentaries, many from the late 1970s, were brought to Berlin. In contrast to Steven Spielberg's Shoa-fundation, there was no standard set of questions asked. The victims of the Nazis could decide individually which topics they wanted to talk about.

Thus, visitors to the Holocaust-memorial can research their own family history or pupils can experience a very special history class. The computers also indicate other places of commemoration -- because the new "national commemoration site" should not, historian Reinhard Ruerup warns, overshadow "the many other places in Berlin where Jewish victims are commemorated and information about the perpetrators is provided."