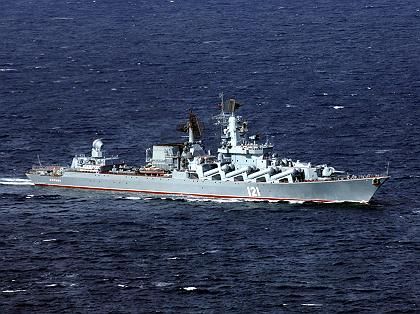 A mild westerly wind blows in from the Mediterranean onto the harbor of Tartus, where cube-shaped and weathered brownish houses sit atop Phoenician era ruins. A small mosque's minaret and a fish restaurant dominate the scene.

But this idyllic image quickly disappears just a few minutes outside the town, where Russian soldiers have set up camp. Surrounded by olive groves and long greenhouses, and guarded by Syrian marines, Moscow's last remaining naval base outside of the post-Soviet Commonwealth of Independent States (CIS) lurks behind a tall metal fence.

At the Tartus naval base, covering an area of almost a hundred acres, about 300 men serve under the command of sea captain Vladimir Gudkov, a former officer in Russia's North Sea fleet. When Gudkov was transferred to Syria from Sevastopol on the Crimean Peninsula, Russia's outpost in Mediterranean was still plagued by a reputation for being a run-down place in the sun.

Founded by the Phoenicians, conquered by the Crusaders in 1102 and subsequently attacked by legendary Arab hero Saladin, the port city just 160 kilometers northwest of Damascus has always been considered strategically important. During the Cold War it served as a supply hub for the Soviets' Mediterranean fleet. But after the Soviet Union's collapse in 1991, the Soviet fleet disappeared from Mediterranean waters and the Tartus base became dilapidated.

But this quickly changed when Gudkov brought in repair teams from Sevastopol to upgrade the facility. A team of technicians is currently replacing hatches and antennas on the base's floating dock, where incoming ships are refueled and loaded with provisions. More and more Russian landing vessels like the "Jamal," and modernized warships like the "Smetlivy" and the "Pytlivy," are dropping anchor in the ancient Crusader port. The missile cruiser "Moskva," the flagship of Russia's Black Sea fleet, with a crew of 850 and Vice Admiral Vassily Kondakov on board, paid a visit to the Latakia naval base in February. As in the old days, Kondakov met with the head of Syria's navy to assure his Syrian counterpart that Russian-Syrian relations are about to experience "an upswing." 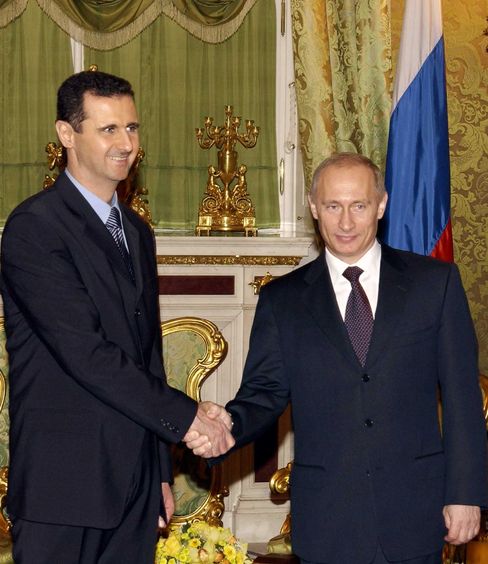 Syrian President Bashar al-Assad and Russian President Vladimir Putin shake hands during their meeting in at the Kremlin, in Moscow.

This, at least, is what Russian President Vladimir Putin intends. In a speech to military commanders, the Kremlin chief said that a newly "modern and mobile" Russian fleet will once again be flying its colors on the world's oceans. The president had nothing but praise for Russia's navy, which he said has become "significantly more active" in the Mediterranean, clearly a reflection of Putin's efforts to boost his country's profile in the Middle East.

Syria is Russia's most important partner in the region. Thirty-five thousand Syrians hold degrees from Russian universities. At a Kremlin reception for Syrian President Bashar Assad, Putin, referring to the Soviet era, praised the two countries' "special and sincere relations" -- and promptly forgave about $10 billion in Syrian debt accumulated over the years, principally as a result of arms purchases. Over three decades, the current president's father, Hafiz Assad, received military equipment valued at about $25 billion from the Russians. To this day, the 308,000 troops in the country's armed forces are equipped almost exclusively with Soviet gear, including 4,600 tanks, primarily T-72 and T-62 models, about 600 MIG and Sukhoi fighter jets, 170 helicopters and at least two diesel-powered submarines.

Putin guaranteed the delivery of Russian Streletz anti-aircraft missiles (referred to as SA-18s in NATO parlance). The carriage-mounted missiles with a range of six kilometers (about four miles) could make "low altitude flights over the residence of the Syrian president" more difficult in the future, Putin said in an interview with Israeli television. Indeed, Israel deeply humiliated the Syrians last year when it sent a squadron of F-16 fighter jets on a low-altitude mission encircling Assad's summer residence near the Russian base.

Moscow's military assistance is going to a country US President George W. Bush has called an "extraordinary threat to US national security," a country the US State Department classifies as a sponsor of terrorism because of its support for terrorist organizations Hamas and Hezbollah. But what most concerns American military experts is the Syrian army's acquisition of about 1,000 Russian Kornet-E anti-tank guided missiles. The weapon also has the Pentagon concerned, because of its ability to turn even the most state-of-the-art Bradley armored personnel carrier into burning scrap metal from distances of up to 5.5 kilometers (3.4 miles) within seconds. About 10,000 Syrian officers have received top-rate training at both Soviet and Russian military academies, with a fresh crop of pilots and air defense specialists currently attending Russia's air force academy.

Serving on the Mediterranean is popular. With even low-ranking officers earnings at least $1,000 a month, military pay on the Syrian frontier is about triple what it is at home. But a Syrian tour of duty, which usually lasts three years, does have its price: isolation. In an effort to avoid being conspicuous, the Russian guests wear Syrian uniforms and are required to spend their free time with their families in isolated compounds, with a small vacation on Latakia's sandy, palm-lined beaches a rare and precious respite from the monotony of life on base.