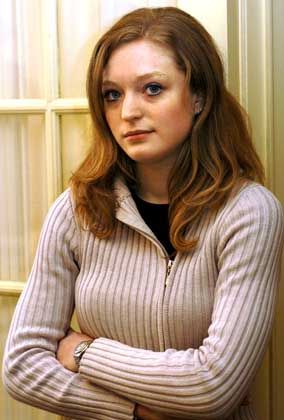 For 80 days, Sabine Dardenne was repeatedly raped, abused and forced to live in a small cellar. Eight years later, after Dutroux's trial, she is trying to lead a normal life in Paris.

She returned and felt the looks of those who felt sorry for her, who just wanted to hug her, but also those of other people who "imagined things" that might have happened to a 12-year-old girl in Marc Dutroux's dungeon. She says that she always tried to ignore their looks, "even when they looked at me as if I were from Mars."

She smokes quickly and nervously. It's early on an October evening, and there's a flickering sunset over Paris.

She returned from a basement in the Belgian town of Marcinelle. Her name was Sabine Dardenne, and she was a victim of child-molester Dutroux, who locked up and molested her for 80 days. But she says that the looks people gave her, "they were the worst, afterwards."

Now, eight years later, she faces the same looks. Since the Dutroux trial this spring, people recognize her adult face, and it will soon become even more recognizable when it appears on book covers in France, Belgium, Germany and in a total of almost 30 countries. It's her book, and she wanted it this way. Mademoiselle Dardenne, slim, her eyes framed with eye-liner, wearing a tiny jewel in her nose; a 21-year-old who, oddly enough, doesn't seem older than 21. Sabine Dardenne, surrounded by bookshelves in an office on the 49th floor, high above Paris, in the offices of her publisher, Oh! Editions in the Montparnasse Tower. In French, her book is called: I was 12 when I got on my bicycle and headed for school.

It's the story of a girl who returns, a story that confronts the lingering fears of the families of missing children: Will she still be my daughter when she returns? What will she be like?

Sabine Dardenne endured 80 days of abuse, filth, and mortal agony, 80 days smelling the foul breath of this man she calls "the pig," and who told her: "You are my new wife." This man who forced her to spend nights in his double bed, who tied her foot to his foot, who didn't care about her pain, and who told her not to make such a fuss, that it just happens to hurt a little the first time.

At the time, she couldn't know that at least four other girls hadn't survived their encounters with Dutroux. Their names were An, Eefje, Julie and Melissa. Sabine was freed on August 15, 1996, together with Laetitia, with whom she had shared her captivity for six days. And then what happened? How does one live as someone who survived?

Laetitia Delhez received visitors, spoke with friends and, within a week of her return, was sitting in her mother's living room, apparently enjoying the attention she was getting from German journalists. She sat there beaming, excited, hectic, barely able to catch her breath among the flowers and letters and gifts, as if she had not yet truly understood what happened during those six days in Dutroux's basement.

Sabine Dardenne, on the other hand, didn't talk about her story for eight years.

A Need for Normalcy

Darkness descends on Paris. She pulls her thick, light-blue wool scarf more tightly around her neck, and says: "Everyone expected me to descend into self-pity. But that's not the way I am."

A 12-year-old who experienced things that her family doesn't dare imagine. A girl whose family suddenly wants to do whatever it can to protect her, a girl who withdraws to her room in the attic just to get away: "You're not helping me by suffocating me." She rides her bike to school in the morning. "Normal," she says. 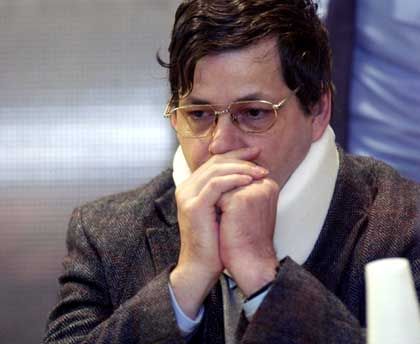 In June, a Belgian court sentenced Dutroux to life imprisonment for the kidnapping and murder of the girls.

What about her girlfriends? They're 12, truly 12, but she's only nominally 12-years-old. She thinks to herself, "I've grown older; maybe they think that I'm putting on airs," but she still prefers their company over that of adults. These 12-year-olds don't imagine things. "If only you knew," she sometimes thinks to herself. Thank God they don't know.

She refused to tell her parents anything. She said to her mother: "It's happened and it can't be changed. You'll only feel ten times as bad if you know what happened."

She doesn't want psychotherapy. She has willed herself to be normal, and normal people don't need therapists.

Once, just once, she gives in and agrees to meet with a therapist, who asks her to interpret inkblots. She thinks to herself, no one can help me -- except me.

Living at the center of a national crisis 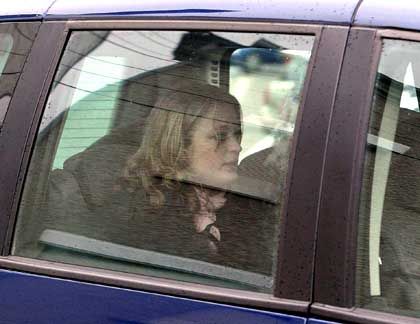 Sabine Dardenne arrives at the courthouse in Arlon, Belgium, to testify during the Dutroux trial.

She disappeared from the public eye for eight years, becoming an adult, surviving with "my own little form of therapy." She calls it zapping. Just zapping out the pictures she doesn't want to see. Eight years, in which Belgium was consumed by a national crisis, an endless dispute over the testimony of dubious witnesses, witnesses who talked about networks of pedophiles, eight years of intrigues and conspiracy theories that would have the entire state involved in the Dutroux affair. In the middle of it all, in the eye of the storm, a storm she preferred to ignore, was the silent witness, Sabine Dardenne.

They were bad for Belgium, those eight years, but good for Sabine Dardenne. She had the opportunity to grow up in peace and quiet, go to school, find a job and a boyfriend. Then, this spring, she decided to confront the process, to confront the parents whose children, also Dutroux's victims, didn't have the chance to grow up. For Gino Russo, it's almost unbearable that people now address her as "Mademoiselle Dardenne." His Melissa never made it to become "Mademoiselle Russo."

She tries not to, but sometimes she suffers from survivor's guilt. She feels guilty vis-a-vis Laetitia, because when she was being held by Dutroux, she told him "I want a girlfriend," and then he showed up with the kidnapped Laetitia and said: "Look what I've done for you."

She's ashamed to have believed Dutroux the manipulator. To have believed him when he told her that her parents didn't want her back. That he would protect her from a big, bad, murderous boss. She even believed that Dutroux went to the police voluntarily to release her and Laetitia. She saw her tormentor standing in front of the door to his cell, surrounded by police officers, and she gave him a kiss and said: "merci."

"I find it difficult to forgive myself for that 'merci'," she says.

A young woman, half-smiling, sits in the darkening office in the Montparnasse Tower. Her composure through the years has stunned many -- almost everyone expected her to fall apart.

She didn't. Why not?

"Resilient" is a word she's been hearing a lot of these days. Psychologists use it to describe people who are better able to withstand traumatic events than others, and who are better able to forget and move on. Now she's being analyzed after all, but from a distance. Now a Belgian youth psychiatrist named Jean-Yves Hayez reads her books and says he's discovered a "very strong character," a person who refuses to be subjugated and who protests, protests, protests. That's exactly what she does, and she's very proud of it. She complains about the food and the filth. When he has his way with her, she yells: "No! You disgust me!" When she's chained to him at night, she refuses to fall asleep, so that he can't abuse her while she's sleeping, robbing her of the opportunity to yell: "No!"

He has power over her body, but not the power to define who she is.

Therapists say that in order to survive a trauma, people have to turn their experiences into a story, to name things, to report what really happened. "Not to be able to talk about things," says psychologist James Pennebaker, "is usually even more traumatic than the incident itself." And as if she already knew this, the child Sabine instinctively resorted to the only survival technique she had left: writing. Sabine wrote letters to her family: "Mom, he says I have to 'make love' with him. I have to kiss him. You know how."

It's a horrible irony of history that she wrote these letters for her rapist. He didn't mail them to anyone, but just used them to manipulate his victim. The second irony is that some of the letters were later used as proof of the crimes Dutroux had committed. 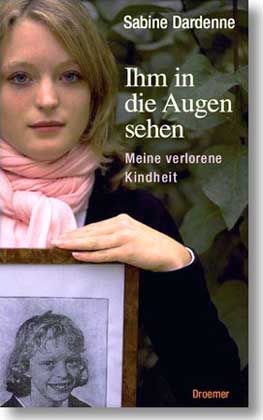 The cover of the German translation of Dardenne's memoir.

Reporters wrote that her testimony in court was "courageous, composed and strong," and that she was "quite satisfied" with the case. She saw him in his glass cage, and he was the one who had to avert his eyes. Once she yelled at him, calling him a "dirty pig!" to his face, to make up for the horrible "merci."

He received a life sentence and will never be released, "one hopes."

But not everything has been said. There was too little time in court. Oh! Editions contacted her and sent her a ghost writer, who "talked and talked and talked" about her story, leaving just enough unsaid to preserve her dignity. And now she has this book.

There are still people who believe the whole thing was just a big conspiracy. For Sabine Dardenne, the perpetrator was a repulsive excuse for a human being, saying that "everything else doesn't fit to what I experienced." But there are parents of victims for whom the crime was too enormous to have been committed by a single, miserable person. There are people who believe that she was drugged for 80 days and didn't notice who, other than Dutroux, had access to her body. Now they can read all about it: Look, everyone, I still remember everything. Look, I'm absolutely clear about the whole thing.

Sabine Dardenne is 21 and looks down at the world from her tower in Paris. She's famous, but no longer as just a victim. Now she's an author, and her publisher is hoping that her book will be a huge success. She is "incredibly proud" of her book, her interpretation, her closing remarks on the Dutroux affair.

Her parents can read it, the parents who didn't know what to do with a daughter who refused to talk about the horrors she'd experienced, who wanted to keep her out of the trial, who refused to hand over the letters. She feels regret about these parents, who have since separated, which "has nothing to do with me and my story," she says. She still feels guilty. "They paid too much attention to me and not enough to themselves. I believe that I dealt with the whole thing better than they did."

* Sabine Dardenne with Marie-Therese Cuny: I Choose To Live. Virago Press, London. To be published in English in June 2005.