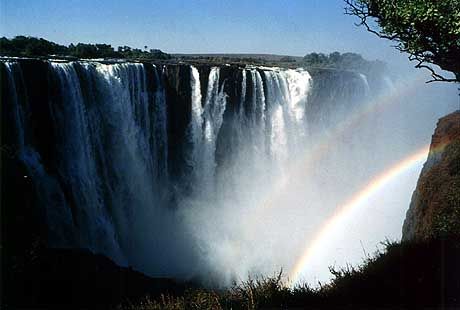 Business is booming for Chris Aston. He's already planted 100 acres in Virginia tobacco and another 320 acres in wheat. He also grows hot chili peppers for US spice conglomerate Tabasco. Even during the dry season, when the unforgiving Zambian sun scorches the earth, wreaking havoc on other farmers' crops, Aston's green wheat fields sway in the breeze.

He gets his water from the nearby, bluish-green Zambezi River, which flows tranquilly past his land before crashing down Victoria Falls about 12 miles downstream.

Because Aston emigrated to Zambia only two years ago, he isn't exactly a made man yet, but he's well on his way to striking it rich. His farm already boasts 200 employees.

The world he left behind is now virtually at his doorstep, a mere 500 feet across the Zambezi River, in Zimbabwe. It was where he spent his entire childhood, where he married and fathered children, where he became a tobacco farmer -- a country that was still called Rhodesia when Aston was born. But now he has vowed never to return to his former home, because it was in Zimbabwe where he lost everything.

The Zimbabwean government seized and expropriated Aston's farm without paying him a single Zimbabwe dollar in compensation. Most of his friends left the country, some were arrested and beaten, and others were even lynched by agitated mobs. The upshot of these state-sanctioned policies has been widespread hunger in Zimbabwe.

The country has been transformed into a wasteland by its racist, socialist leader Robert Mugabe, who proudly sports a Hitler mustache, holds sham elections and censors the press. Mugabe brags of having "an academic degree in violence" and of being the "Hitler of our times." His country has become a nightmare, even by Africa standards. In light of what's happened in Zimbabwe, Aston is relieved that he managed to get out in time. "They treated us like the children of Satan over there," he says.

Like Aston, many white Africans find themselves on the move once again, and tensions are no longer confined to Zimbabwe. In Namibia, racist agitators have been stirring up hatred against white farmers among black farm workers, while "Blankes" in South Africa are also beginning to face increasing violence. More than 1,500 white farmers have been murdered in South Africa since the end of apartheid.

Scorned in some places, embraced in others

While white farmers are branded as racists and colonialists in Zimbabwe and, to some extent, in Namibia, other African countries have welcomed them with open arms. Leaders across Africa, from Nigerian President Olusegun Obasanjo to the heads of state of Mozambique and Malawi, are more than happy to have them settle in their countries. Even Ugandan President Yoweri Museveni is courting Mugabe's outcasts.

"Africa Welcomes Zimbabwe's Whites," read the cover story of African Business, a monthly magazine, citing the "warm welcome" being extended to white farmers in many African countries and the widely held view that "Zimbabweans have the capacity to revitalize the agricultural sector in these countries."

Zimbabwean farmer Paul Retzhoff looks out of the broken windows of his farm office and storeroom at his homestead on Lonely Park farm 30 Km's east of Harare. War veterans who attacked the homestead and smashed windows and broke into the house stealing food and alcohol were chased away by farm labourers from Retzhoff's and neighboring farms.

Many of these displaced farmers from the southern tip of Africa appear to have found a new home in Zambia -- at least temporarily. About 300 Zimbabwean farmers have settled in the former Northern Rhodesia, where they are now running 150 farms with astonishing success.

Ever since the first settlers were chased out of Zimbabwe by Mugabe's thugs and started new lives in neighboring Zambia a few years ago, the Zambian economy has been booming. "Zambia is Africa's success story," says Guy Robinson, the president of the Zambia National Farmers Union.

In 2004, and for the first time since 1978, Zambia, which experienced a famine only two years ago, will export more corn than it imports. Fifty thousand tons have already been shipped to Angola, and another 70,000 are being sold to Malawi. It's a success story that is due in part to the country's black small-scale farmers, who have benefited from the liberal economic policies of President Levy Mwanawasa's government.

Even Robert Mugabe's failed regime is benefiting from Zambia's record harvest. Nineteen thousand tons of seed corn were exported to Zimbabwe this year.

Only a few kilometers from Zimbabwe's fallow tobacco fields, Zambian tobacco farmers are reporting "astronomical growth rates." They produced 15,000 tons of tobacco this year. The 2004 harvest already represents a huge increase over the 4,000 tons produced in 2000, and Zambian farmers expect even better harvests in the future. In contrast, neighboring Zimbabwe's tobacco industry is likely to collapse in the very near future.

When the land robbery ordered by the government began in 2000, Zimbabwe was still producing 237,000 tons of tobacco. According to estimates published by the government in Harare, this year's harvest is expected to amount to a mere 64,000 tons, a number experts view as vastly exaggerated.

In a typical display of dry British humor, The Economist dubbed the difference between the two countries "Zim's loss - Zam's gain." With such accolades, it comes as no surprise that Zambian Minister of Agriculture Mundia Sikatana is already gushing that "only the sky is the limit for our growth."

The Zambian tourist industry has also benefited from the chaos across the Zambezi River. In 1855, Scottish missionary David Livingstone raved about the massive Victoria Falls, writing that they offer a "view so wonderful that even angels in their flight marvel at the spectacle."

For years, most tourists visiting the falls stayed in the town of Victoria Falls on the Zimbabwean side. But that too has changed. As one hotel after the next has been forced to close its doors in Victoria Falls, Zambia's smaller sister town, Livingstone, has blossomed. Everything from luxury hotels to inexpensive guesthouses catering to the backpacker crowd has been springing up from the red earth near the falls.

In Zambia, farmers' union president Robinson sometimes finds it difficult to fathom the positive developments in his country's economy. Last week, he received a visit from two South African sugar cane farmers who plan to invest in Zambia. He also says that frustrated Namibians have been inquiring about the Zambian climate for investment.

Namibia also threatens to be consumed by a collapse à la Zimbabwe. While investors are alarmed and repelled by talk of expropriation coming from the country's president-elect and former Minister of Land Issues, Hifikepunye Lucas Pohamba, Namibia's tourist industry is already feeling the brunt of Pohamba's inflammatory rhetoric. Some areas of the Namibian tourist industry have already experienced declines of up to 30 percent.

Zambian farmers' union president Robinson advises the victims of Pohamba's hatred of whites to "sell, as long as you can get some compensation for your property in Namibia, and invest the money someplace else. At some point, you'll be thrown out of the country anyway."

Zambia can already tout itself as a highly successful alternative to white farmers pulling up their roots in places like Namibia and Zimbabwe. The country is well on its way to becoming Africa's bread basket. While much of the soil in Namibia is bone-dry, Zambia is not only blessed with an ample supply of fresh water, but also with a government that possesses the necessary pragmatism when it comes to economic issues. Given these favorable conditions, it's understandable that more and more white farmers see it as a land of unlimited opportunity.

Tom Hinmers, 40, was also forced to witness the decline of Zimbabwe. His parents and even his grandparents, who emigrated to the former British colony from Scotland and England, were farmers in Africa. Hinmers watched "as everything got out of hand," but he had no plans of ever leaving Africa, which he considers his home. When the situation in Zimbabwe began to seem completely hopeless, he packed his car and, together with his wife and three children, simply drove across the border into Zambia.

He had to invest $1 million in his new tobacco farm, most of it borrowed. He raves about the fantastic conditions in Zambia, its excellent soil, and the welcome benefit of not having to pay any taxes for the first five years.

Hinmers is still at the very beginning of a new life in his new home. He lives in a makeshift cabin he built with his own hands. Teaching the local farm laborers how to farm tobacco -- a little-known skill in Zambia until now -- is a challenge.

But he already has 230 employees, has just harvested 295 tons of tobacco, and expects to have paid off his loans within five years. "What we have achieved here in a year and a half," he says, "would have taken 15 years in Zimbabwe."