SPIEGEL: Mr. Pierer, you once said that you like to discuss important decisions with your wife. Have you discussed with her in recent weeks whether you should resign as Siemens' supervisory board chairman? 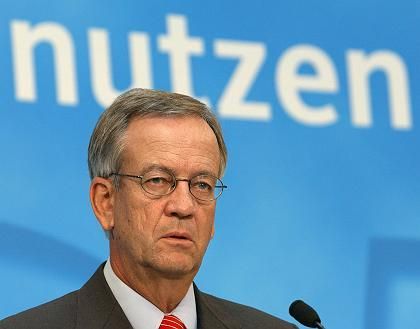 Pierer: Just as in any other case, my discussions with my wife are our own business.

SPIEGEL: Demands that you resign have increased since a former member of the company's management board was arrested last week. After all, critics say, the system of slush funds at Siemens developed during your tenure. Besides, as supervisory board chairman you would have to, if possible, file claims for damages from former colleagues, should they be sentenced in the future. Doesn't that worry you?

Pierer: Of course I am depressed about the situation which Siemens has gotten into. I would never have dreamed that a group of executives and employees would manage to disable the relevant safety measures we developed and implemented in recent years. They apparently took advantage of our decentralized organization and believed they had found methods which could not be detected by our external and internal control mechanisms. They have seriously damaged the company.

SPIEGEL: In its most recent annual financial statement for the US stock market regulator the Securities and Exchange Commission (SEC), Siemens admits to sensitive loopholes in its financial control systems. Doesn't someone have to take responsibility for this?

Pierer: Our supervisory board's investigative committee, headed by (Gerhard) Cromme, has contracted outside specialists to investigate in depth which errors and misconduct took place, as well as to develop proposals on how to make our control systems watertight. The board of directors has hired a renowned public prosecutor who will be installed as director of the Compliance Office. I am confident that people will recognize how decisively we are now proceeding to put an end to the specter of corruption. We are absolutely determined to clean up our act, without any compromises.

SPIEGEL: You yourself, together with the then-chief financial officer, had to provide the SEC with a written declaration that the submitted financial statements were accurate. Now the company has retroactively corrected some of those statements. Do you expect that the SEC watchdogs will contact you in the near future?

Pierer: It goes without saying that these matters will be investigated. But the important thing is that we acted to the best of our knowledge and are now taking the appropriate measures.

SPIEGEL: The co-chair of the Greens' parliamentary group in the Bundestag, Renate Künast, has called upon Chancellor Angela Merkel to suspend you from your position as chairman of the government's innovation council until the corruption charges have been cleared up. Do you know how the chancellor feels about this?

Pierer: Chancellor Angela Merkel has always shown herself to be a very levelheaded person who does not let herself get provoked into indulging in populist rhetoric.

SPIEGEL: According to information we have obtained, external auditors had already discovered questionable consulting contracts in the communications division a good five years ago, when the mobile division was spun off from the remaining telecommunications business and made into a separate company. Were you made aware of this process at the time?

Pierer: No, this is the first I've heard of it. Just as I am hearing for the first time a lot of all the stories that are being circulated.

SPIEGEL: In the past, the company would often simply let disloyal employees go without filing criminal charges against them. Will this practice change now at Siemens?

Pierer: It is not true that we did not file criminal charges in cases where they were justified.

SPIEGEL: You yourself were responsible for supervising the telecoms division from the autumn of 2003 on, as a member of the company's senior management body, the central management board. Then your successor, Klaus Kleinfeld, assumed this responsibility for a good six months. Didn't anything attract your attention then?

Pierer: I am aware of the fact that it isn't easy for outsiders to fully understand our organization. The job of the division managers in the central management board is oriented primarily toward strategic issues. Others are responsible for auditing the books.

SPIEGEL: There was a case in the power plant division, between 1999 and 2002, that shows striking parallels to the current financial affair. Illegal slush funds and bank accounts in Liechtenstein and Dubai also apparently played a role in that case. Why weren't the conclusions from that case used to investigate the current telecoms affair and why weren't the financial structures in that division examined at the same time?

Pierer: Please assume that we have not been inactive. But if the director of sales, the head of distribution, the director of accounting and the audit director in a division cooperate to cover up activities, it becomes extremely difficult. In this case, even our installed network of 885 compliance agents in operating divisions and regional units worldwide was evidently unsuccessful.

SPIEGEL: Your successor Kleinfeld plans to reach ambitious profit targets by next April, objectives that you already set for the individual divisions in 2000. Will the deadline be postponed if important contracts fail to materialize in light of the bribery affair, or if Siemens is even barred from competing for public tenders?

Pierer: I have always been convinced that one can be more successful in business with honest, fair and legal behavior than with tricks. That's why I fail to see why we should deviate from our targets -- which Siemens is well on the way to achieving, by the way.

SPIEGEL: Now that the communications division has been merged into a joint venture with your Finnish former competitor Nokia, Siemens is significantly easier to swallow than before. The weak dollar could also depress turnover and the share price, and trigger takeover speculations. Are you already taking steps to ward off a hostile takeover?

Pierer: I see no reason to do so. We are strengthening our business and creating value for our customers and shareholders. That's the best recipe.