Mr. Shikwati, the G8 summit at Gleneagles is about to beef up the development aid for Africa...

SPIEGEL: Stop? The industrialized nations of the West want to eliminate hunger and poverty.

Shikwati: Such intentions have been damaging our continent for the past 40 years. If the industrial nations really want to help the Africans, they should finally terminate this awful aid. The countries that have collected the most development aid are also the ones that are in the worst shape. Despite the billions that have poured in to Africa, the continent remains poor.

SPIEGEL: Do you have an explanation for this paradox?

Shikwati: Huge bureaucracies are financed (with the aid money), corruption and complacency are promoted, Africans are taught to be beggars and not to be independent. In addition, development aid weakens the local markets everywhere and dampens the spirit of entrepreneurship that we so desperately need. As absurd as it may sound: Development aid is one of the reasons for Africa's problems. If the West were to cancel these payments, normal Africans wouldn't even notice. Only the functionaries would be hard hit. Which is why they maintain that the world would stop turning without this development aid.

SPIEGEL: Even in a country like Kenya, people are starving to death each year. Someone has got to help them.

Shikwati: But it has to be the Kenyans themselves who help these people. When there's a drought in a region of Kenya, our corrupt politicians reflexively cry out for more help. This call then reaches the United Nations World Food Program -- which is a massive agency of apparatchiks who are in the absurd situation of, on the one hand, being dedicated to the fight against hunger while, on the other hand, being faced with unemployment were hunger actually eliminated. It's only natural that they willingly accept the plea for more help. And it's not uncommon that they demand a little more money than the respective African government originally requested. They then forward that request to their headquarters, and before long, several thousands tons of corn are shipped to Africa ...

Shikwati: ... and at some point, this corn ends up in the harbor of Mombasa. A portion of the corn often goes directly into the hands of unsrupulous politicians who then pass it on to their own tribe to boost their next election campaign. Another portion of the shipment ends up on the black market where the corn is dumped at extremely low prices. Local farmers may as well put down their hoes right away; no one can compete with the UN's World Food Program. And because the farmers go under in the face of this pressure, Kenya would have no reserves to draw on if there actually were a famine next year. It's a simple but fatal cycle.

SPIEGEL: If the World Food Program didn't do anything, the people would starve.

Shikwati: I don't think so. In such a case, the Kenyans, for a change, would be forced to initiate trade relations with Uganda or Tanzania, and buy their food there. This type of trade is vital for Africa. It would force us to improve our own infrastructure, while making national borders -- drawn by the Europeans by the way -- more permeable. It would also force us to establish laws favoring market economy.

SPIEGEL: Would Africa actually be able to solve these problems on its own?

Shikwati: Of course. Hunger should not be a problem in most of the countries south of the Sahara. In addition, there are vast natural resources: oil, gold, diamonds. Africa is always only portrayed as a continent of suffering, but most figures are vastly exaggerated. In the industrial nations, there's a sense that Africa would go under without development aid. But believe me, Africa existed before you Europeans came along. And we didn't do all that poorly either.

SPIEGEL: But AIDS didn't exist at that time.

Shikwati: If one were to believe all the horrorifying reports, then all Kenyans should actually be dead by now. But now, tests are being carried out everywhere, and it turns out that the figures were vastly exaggerated. It's not three million Kenyans that are infected. All of the sudden, it's only about one million. Malaria is just as much of a problem, but people rarely talk about that.

SPIEGEL: And why's that?

Shikwati: AIDS is big business, maybe Africa's biggest business. There's nothing else that can generate as much aid money as shocking figures on AIDS. AIDS is a political disease here, and we should be very skeptical.

SPIEGEL: The Americans and Europeans have frozen funds previously pledged to Kenya. The country is too corrupt, they say.

Shikwati: I am afraid, though, that the money will still be transfered before long. After all, it has to go somewhere. Unfortunately, the Europeans' devastating urge to do good can no longer be countered with reason. It makes no sense whatsoever that directly after the new Kenyan government was elected -- a leadership change that ended the dictatorship of Daniel arap Mois -- the faucets were suddenly opened and streams of money poured into the country.

SPIEGEL: Such aid is usually earmarked for a specific objective, though.

Shikwati: That doesn't change anything. Millions of dollars earmarked for the fight against AIDS are still stashed away in Kenyan bank accounts and have not been spent. Our politicians were overwhelmed with money, and they try to siphon off as much as possible. The late tyrant of the Central African Republic, Jean Bedel Bokassa, cynically summed it up by saying: "The French government pays for everything in our country. We ask the French for money. We get it, and then we waste it." 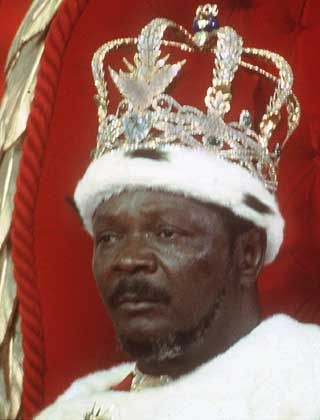 Former Central African Republic leader Jean-Bedel Bokassa: "We ask the French for money. We get it, and then we waste it."

SPIEGEL: In the West, there are many compassionate citizens wanting to help Africa. Each year, they donate money and pack their old clothes into collection bags ...

Shikwati: ... and they flood our markets with that stuff. We can buy these donated clothes cheaply at our so-called Mitumba markets. There are Germans who spend a few dollars to get used Bayern Munich or Werder Bremen jerseys, in other words, clothes that that some German kids sent to Africa for a good cause. After buying these jerseys, they auction them off at Ebay and send them back to Germany -- for three times the price. That's insanity ...

SPIEGEL: ... and hopefully an exception.

Shikwati: Why do we get these mountains of clothes? No one is freezing here. Instead, our tailors lose their livlihoods. They're in the same position as our farmers. No one in the low-wage world of Africa can be cost-efficient enough to keep pace with donated products. In 1997, 137,000 workers were employed in Nigeria's textile industry. By 2003, the figure had dropped to 57,000. The results are the same in all other areas where overwhelming helpfulness and fragile African markets collide.

SPIEGEL: Following World War II, Germany only managed to get back on its feet because the Americans poured money into the country through the Marshall Plan. Wouldn't that qualify as successful development aid?

Shikwati: In Germany's case, only the destroyed infrastructure had to be repaired. Despite the economic crisis of the Weimar Republic, Germany was a highly- industrialized country before the war. The damages created by the tsunami in Thailand can also be fixed with a little money and some reconstruction aid. Africa, however, must take the first steps into modernity on its own. There must be a change in mentality. We have to stop perceiving ourselves as beggars. These days, Africans only perceive themselves as victims. On the other hand, no one can really picture an African as a businessman. In order to change the current situation, it would be helpful if the aid organizations were to pull out.

SPIEGEL: If they did that, many jobs would be immediately lost ... 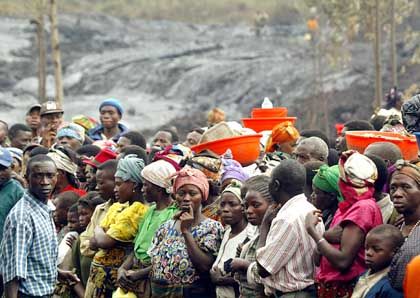 Congolese line up for a United Nations food delivery in 2002.

Shikwati: ... jobs that were created artificially in the first place and that distort reality. Jobs with foreign aid organizations are, of course, quite popular, and they can be very selective in choosing the best people. When an aid organization needs a driver, dozens apply for the job. And because it's unacceptable that the aid worker's chauffeur only speaks his own tribal language, an applicant is needed who also speaks English fluently -- and, ideally, one who is also well mannered. So you end up with some African biochemist driving an aid worker around, distributing European food, and forcing local farmers out of their jobs. That's just crazy!

SPIEGEL: The German government takes pride in precisely monitoring the recipients of its funds.

Shikwati: And what's the result? A disaster. The German government threw money right at Rwanda's president Paul Kagame. This is a man who has the deaths of a million people on his conscience -- people that his army killed in the neighboring country of Congo.

SPIEGEL: What are the Germans supposed to do?

Shikwati: If they really want to fight poverty, they should completely halt development aid and give Africa the opportunity to ensure its own survival. Currently, Africa is like a child that immediately cries for its babysitter when something goes wrong. Africa should stand on its own two feet.