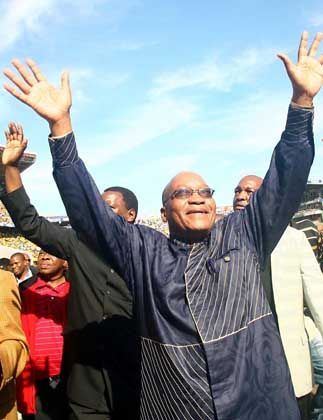 SPIEGEL: South Africa will host the football World Cup in three and a half years, but your country's high crime rate has many worried. Will fans from abroad be able to travel to South Africa without having to fear for their safety?

Zuma: We South Africans are also crazy about football, so the World Cup can be nothing but successful. The Germans shouldn't worry about coming here. Our media, which is very open and report on really everything, tend to exaggerate the crime issue. In other countries, newspapers and broadcast stations are patriotic and are far less interested in things that could damage their countries' reputations in the world. This is why one gets the impression that we have much more crime than other countries. In our case the media goes too far when it comes to openness. Of course, it would be even better if the media would report this openly in all countries, but unfortunately that isn't the case.

SPIEGEL: But you must admit that assaults and burglaries are common. In fact, people are barricading themselves behind high walls and barbed wire for fear of violent crime.

Zuma: That's certainly true, but there is also violence in Germany. Before the World Cup, blacks like me were warned not to go to certain areas where there are many right-wing extremists.

SPIEGEL: So what are you doing to get the problem under control?

Zuma: We are doing a lot. We cooperate closely with private companies and with citizens, who organize security on their streets themselves. For example, we have already managed to bring down Johannesburg's crime rate considerably. Of course, we will increase our efforts even further leading up to 2010.

SPIEGEL: Can the problem really be solved by the police? Liberal economic policies have led to several years of growth rates between 5 and 6 percent. But only a relatively small segment of the population is benefiting from the boom.

Zuma: Criminality is always the result of poverty. Countries that experience such a fundamental change as we have -- we had the apartheid regime and must now develop a multicultural democracy -- must necessarily pass through a phase of high crime rates.

SPIEGEL: Nevertheless, there is growing public dissatisfaction with the ANC government, and many are disappointed. There is also discord within the party. The Congress of South African Trade Unions (Cosatu), which is part of the ANC, has criticized the government. The Communists are even considering supporting their own list of candidates in the next election. It is no secret that you are embroiled in a dispute with President Thabo Mbeki. Could the ANC be facing a split?

Zuma: Thabo Mbeki is my old comrade and partner. I am constantly reading about our quarrel. When President Mbeki suspended me from the office of deputy president during the court cases against me, the newspapers finally had what they had long been waiting for.

SPIEGEL: In other words, it's just another evil press conspiracy?

Zuma: People have been talking about a split within the ANC for the past 10 years, but that won't happen. For decades, we had nothing but strikes, arrests and gun battles between the unions and the government in this country. What you see now is debate in a democracy. The ANC is a broad church, and it is the only forum for such discussions. Many see this as negative, but they are simply not accustomed to democracy. Besides, the Communists and Cosatu are not against the government's policies as such, but against the fact that some measures have been implemented without their being consulted.

SPIEGEL: Are the social conflicts in South Africa still conflicts between blacks and whites?

Zuma: Seventy to 80 percent of our society was excluded from economic progress and good education for decades. Under the apartheid regime, blacks were not even allowed to enter certain urban areas without special permits, not to mention participate in the economic system. One cannot make up for this deficit in a few years. In this regard, poverty is still principally a black problem.

SPIEGEL: Despite such difficulties, South Africa is already a fast-developing nation, possibly the only one in sub-Saharan Africa. It is also gaining importance abroad, and yet Pretoria continues to exercise great restraint when it comes to Robert Mugabe, who has turned neighboring Zimbabwe into a dictatorship and has forced whites from their land and driven them out of the country.

Zuma: The Europeans often ignore the fact that Mugabe is very popular among Africans. In their eyes, he has given blacks their country back after centuries of colonialism.

SPIEGEL: But with the methods of a brutal police state.

Zuma: You shouldn't jump to conclusions. When I met Mugabe a few years ago he said: "I am the elected leader of a sovereign state. The British and the Americans criticize me while at the same time embracing a military leader like Pervez Musharraf in Pakistan. He came to power in a military coup and he continues to wear his uniform." Mugabe asked me: "How does one reconcile that?" I had no response.

SPIEGEL: But Zimbabwe has not had free elections in a long time.

Zuma: People are constantly applying double standards. Take the United States, for example. Washington wants the whole world to admire the country for its democracy. Then the government sends out its army, in the name of this democracy, and leaves behind the kind of chaos we see in Iraq. Are the Americans even qualified to criticize Mugabe? We have decided not to take steps against Mugabe, but rather to engage him with quiet diplomacy.

SPIEGEL: But that hasn't produced any results. Mugabe has grown into a dictator, and his country is isolated internationally and economically in ruins. It has more than 1,000 percent inflation.

Zuma: The people love him. So how can we condemn him? Many in Africa believe that there is a racist aspect to European and American criticism of Mugabe. Millions of blacks died in Angola, the Republic of Congo and Rwanda. A few whites lost their lives in Zimbabwe, unfortunately, and already the West is bent out of shape.

SPIEGEL: China is becoming increasingly involved in Africa economically, buying raw materials and selling its own goods on the continent. Europeans are critical because Beijing also cooperates with dictator Mugabe and the military regime in Sudan.

Zuma: Africa suffered under European dominance for centuries. Colonialism sucked our continent dry. Africa was carved up in 1887 at the Berlin Conference, and during the Cold War the West supported the most despicable dictatorships in Africa. We had to fight the Europeans for our independence, and the conditions imposed by the World Bank and the International Monetary Fund have made people in many parts of Africa even poorer than they already were. Now China comes along, a huge, growing economic power that has hardly ever interfered in Africa. There is not a single country in the world that is not interested in doing business with China at the moment, including Germany. And no one is seriously concerned about human rights. But Africans are criticized for wanting to do business with China.

SPIEGEL: You were investigated for corruption in connection with international arms deals. You were acquitted, but your moral reputation suffered when you were put on trial for rape. Do you see this as a conspiracy perpetrated by your adversaries within the ANC?

Zuma: I have never said that -- but I have also never ruled it out. I have always had many supporters in the ANC. When I was investigated, many felt that I was being treated unfairly. I share this feeling.

SPIEGEL: Your public support seemed to grow the more you came under pressure in court. Will you run for the presidency?

Zuma: ... described me as a very ambitious man. But the ANC has its own political culture. You can't say: I want to be president. No one has ever done that. The ANC leadership decides who will be proposed for which office at the party convention next year. The regional organizations can also submit their proposals. In other words, we don't have election campaigns in the ANC. Only when the organization has decided a person is suitable are the candidates themselves asked whether they would accept election to an office.

SPIEGEL: And? Would you accept?

Zuma: I have always been entrusted with challenging positions since I joined the ANC. I have never turned down an appointment. It would be a first.