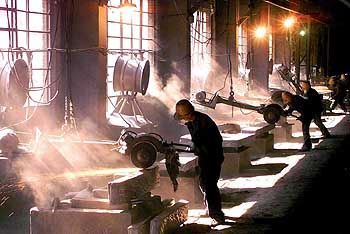 Industry is booming in China at the moment, but so too is pollution.

China is dazzling the world with its booming economy, which grew by 9.5 percent. Aren't you pleased with this speed of growth?

Pan: Of course I am pleased with the success of China's economy. But at the same time I am worried. We are using too many raw materials to sustain this growth. To produce goods worth $10,000, for example, we need seven times more resources than Japan, nearly six times more than the United States and, perhaps most embarrassing, nearly three times more than India. Things can't, nor should they be allowed to go on like that.

SPIEGEL: Such a viewpoint is not exactly widespread in your country.

Pan: Many factors are coming together here: Our raw materials are scarce, we don't have enough land, and our population is constantly growing. Currently, there are 1.3 billion people living in China, that's twice as many as 50 years ago. In 2020, there will be 1.5 billion people in China. Cities are growing but desert areas are expanding at the same time; habitable and usable land has been halved over the past 50 years.

SPIEGEL: Still, each year China is strengthening its reputation as an economic Wunderland.

Pan: This miracle will end soon because the environment can no longer keep pace. Acid rain is falling on one third of the Chinese territory, half of the water in our seven largest rivers is completely useless, while one fourth of our citizens does not have access to clean drinking water. One third of the urban population is breathing polluted air, and less than 20 percent of the trash in cities is treated and processed in an environmentally sustainable manner. Finally, five of the ten most polluted cities worldwide are in China. 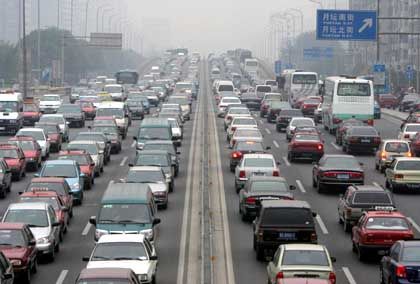 Air pollution has become a major problem for Chinese cities.

SPIEGEL: How great are the effects of this environmental degradation on the economy?

Pan: It's massive. Because air and water are polluted, we are losing between 8 and 15 percent of our gross domestic product. And that doesn't include the costs for health. Then there's the human suffering: In Bejing alone, 70 to 80 percent of all deadly cancer cases are related to the environment. Lung cancer has emerged as the No. 1 cause of death.

SPIEGEL: How is the population reacting to these health problems? Are people moving to healthier parts of the country?

Pan: Even now, the western regions of China and the country's ecologically stressed regions can no longer support the people already living there. In the future, we will need to resettle 186 million residents from 22 provinces and cities. However, the other provinces and cities can only absorb some 33 million people. That means China will have more than 150 million ecological migrants, or, if you like, environmental refugees.

SPIEGEL: Hasn't your government tried to get pollution under control?

Pan: Yes it has, and in some cities such as Beijing the air quality has, in fact, improved. Also, the water in some rivers and lakes is now cleaner than it's been in the past. There are more conservation areas now and some model cities that focus specifically on environmental protection. We are replanting forests. We have passed additional laws and regulations that are stricter than in the past and they are being more rigorously enforced.

SPIEGEL: But the economic growth fanatics in Beijing will still likely carry on just as before. 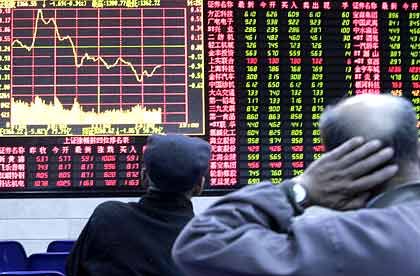 Some criticize the government for only being interested in economic growth. Sustainability does not seem to be a concern.

Pan: They're still playing the lead role -- for now. For them, the gross domestic product is the only yardstick by which to gauge the government's performance. But we are also making another mistake: We are convinced that a prospering economy automatically goes hand in hand with political stability. And I think that's a major blunder. The faster the economy grows, the more quickly we will run the risk of a political crisis if the political reforms cannot keep pace. If the gap between the poor and the rich widens, then regions within China and the society as a whole will become unstable. If our democracy and our legal system lag behind the overall economic development, various groups in the population won't be able to protect their own interests. And there's yet another mistake in this thinking.....

Pan: It's the assumption that the economic growth will give us the financial resources to cope with the crises surrounding the environment, raw materials, and population growth.

SPIEGEL: Why can't that work?

Pan: There won't be enough money, and we are simply running out of time. Developed countries with a per capita gross national product of $8,000 to $10,000 can afford that, but we cannot. Before we reach $4,000 per person, different crises in all shapes and forms will hit us. Economically we won't be strong enough to overcome them.

SPIEGEL: You have advocated the introduction of the so-called "green gross domestic product." What does that entail?

Pan: It is a model that also takes into account the costs of growth, like environmental pollution for example, and is a topic we are discussing with German experts. We want the performance of functionaries to not only be measured in terms of economic growth but also in terms of how they solve environmental problems and social issues.

SPIEGEL: Does your agency even have the ability to clamp down on environmental criminals? 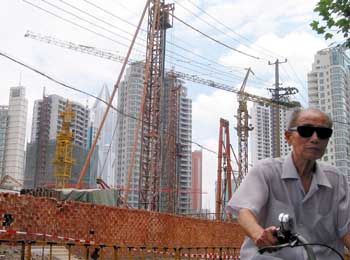 Many are worried that strict environmental laws would slow growth. Others say China can't afford not to have a cleaner environment.

Pan: We recently shut down 30 projects, including several power plants -- one of those at the Three Gorges Dam. The companies involved failed -- as required by law -- to review what effect their new investments would have on the environment.

SPIEGEL: But 26 other projects were allowed to carry on. They only had to pay small fines -- peanuts compared to the billions that were invested.

Pan: Unfortunately, that's true. Which is why our laws and regulations need to be reformed. Even though we have little power, we will close down illegal projects, including economically powerful steel, cement, aluminium, and paper factories. And we will ignore the agendas followed by influential officials and companies.

SPIEGEL: Many environmental offenders have fistfuls of cash or are taking advantage of their political connections....

Pan: My agency has always gone against the grain. In the process, there have always been conflicts with the powerful lobbyist groups and strong local governments. But the people, the media, and science are behind us. In fact, the pressure is a motivator for me. Nobody is going to push me off my current course.

SPIEGEL: China lacks a grassroots, environmental movement. So far, the citizens have very little opportunity to stand up against questionable projects. Courts sometimes don't even accept the suits that the people are filing, and voicing opposition is not allowed.

Pan: Political co-determination should be part of any socialist democracy. I want more discussions with the people affected. However, I am not one to put on a show just to look democratic to the outside. We need a law that enables and guarantees public participation, especially when it comes to environmental projects. If it's safe politically to get involved and help the environment, then all sides will benefit. We must try to convince the central leadership of that.