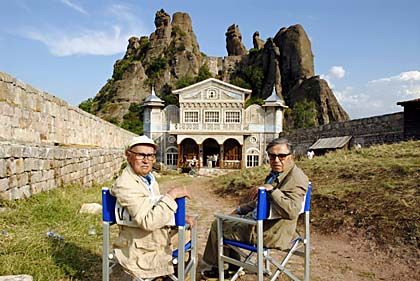 Vittorio (left) and Paolo Taviani on the set of "The Lark Farm."

SPIEGEL: You don't hold back in showing the atrocities committed on the Armenians. Aren't you concerned about shocking your audience?

Vittorio Taviani: Each scene was historically verified, even the most gruesome. We didn't want to hide anything. The slaughtering of the innocent is part of human history and, since the Greek tragedies, part of art. On Sundays our priests deliver sermons about infanticide in Bethlehem. It remains nothing but a word when it is said in church. It is the cinema's job to show it -- not just to emphasize dramatic camera angles, but to quietly show it.

Paolo Taviani: The film isn't just about Turkey in 1915, but also about the present. There have been similar scenes in the Balkans, in Rwanda and in Sudan. We Italians murdered, and the Germans murdered. The horror can happen any time and any place. Why conceal the Armenian tragedy?

SPIEGEL: The Armenian genocide remains a blind spot in Turkey's national identity. Hrant Dink, an Armenian-Turkish journalist, was murdered only recently. Isn't there a concern that the film could trigger violent reactions among Turkish nationalists, similar to the reactions to the Danish cartoons?

Vittorio Taviani: We didn't think about that when we made the film.

Paolo Taviani: We aren't calling it genocide. Whether it was genocide or not is for the historians to decide. We call it a tragedy. This is not a documentary film. We have no intention of supporting any theories with our films. We relate one page from the history books through the fates of our characters. The truth is always only its own truth. At this point in our lives, we wanted to recount a collective experience through a series of personal fates, each of them unique and distressing in its own right. After all, we tell the story of the impossible love between a young Turk and an Armenian woman. The film ends with a trial in which Youssuf, the Turkish soldier, testifies about the crimes. It is not a film against Turkey. On the contrary, it is a film for everyone in Turkey who confronts history. After all, 100,000 people demonstrated in Istanbul against the murder of Hrant Dink. I am convinced that the film will be shown in Turkish schools within a few years.

SPIEGEL: Why did you cast a German actor Moritz Bleibtreu in the role of the good Turk?

Vittorio Taviani: The director is entitled to select the faces to go with his fantasies irrespective of nationality. Bleibtreu is remarkable. The cinema is always illusion. Even (Italian director Luchino) Visconti cast an American, Burt Lancaster, in his film "Gattopardo."

Paolo Taviani: Besides, we have cast a well-known actor of Turkish heritage, Tchéky Karyo, in the film. Karyo told us that after this film, he knew that he hadn't become an actor for nothing.