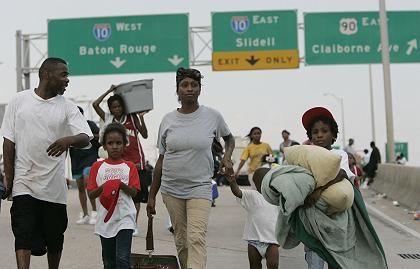 Hurricane Katrina showed just how unjust the distribution of wealth in the United States and other wealthy countries can be.

SPIEGEL: Professor Rogoff, the US economy is surging forward, while President Bush celebrates high growth rates. But most Americans believe they are living in a recession. Who is right?

Rogoff: I too have asked myself whether people have gone crazy. But the fact is that the share of wages in total growth is shrinking.

SPIEGEL: In other words, most people are not benefiting from the recovery and are justifiably disappointed?

Rogoff: The working population's share of national income remained constant for 100 years. That's why Marx's theory that only capitalists benefit from capitalism and workers are exploited was completely wrong. Nothing could have been further from the truth. Workers earned more as economies grew.

SPIEGEL: Is this no longer true?

Rogoff: There has been a noticeable decline in the labor factor in all wealthy countries in the past 20 years. The rich are getting richer, but those at the lower end aren't moving ahead as quickly as the capitalists.

SPIEGEL: So Marx was right after all?

Rogoff: We're still a long way away from that. Workers are not being exploited. But if their share of growth doesn't increase, this could be a potential cause of social tension worldwide. The point is that so far attempts to reverse this trend in the US have failed. Boeing employees achieved barely anything by going on strike (editor's note: last autumn). Instead, the workers are now in a weaker position -- both in aviation and in other industries.

Rogoff: There has never been a better time to get rich. It's quite astonishing how much money people make in the hedge fund business and in the private equity field, and how well-off affluent families really are. Given these contradictions, it comes as no surprise that average Americans have a different perception of the economy than (US President) George W. Bush and his friends. They can play around with statistics as much as they want, but it's clear that we have an unfair distribution of wealth.

SPIEGEL: That hasn't seemed to bother anyone, as long as the dishwasher-to-millionaire dream still exists.

Rogoff: I tell my children that a man like Bill Gates has a personal fortune of $100 billion. They can't even comprehend that. Then I explain that he has more money than some countries. If we have these extremes, I can't understand why we should get rid of the inheritance tax. It hasn't harmed the economy, and it has evened out the distribution of income across generations.

SPIEGEL: Billion-dollar tax cuts for the super-rich -- such as eliminating the inheritance tax -- are meant to generate growth for all. Conservatives like to say that a rising tide lifts all boats.

Rogoff: The New Orleans disaster made it painfully clear what happens to people in deep poverty: they don't even have a boat. Even more tax cuts are the wrong approach, as long as we don't even have universal health insurance for children. I think that's outrageous.

SPIEGEL: Are these injustices the price for lower unemployment and strong growth in the United States?

Rogoff: This unbridled capitalism in the United States can't be sustained socially. It leads to tensions. If we experience another five years like the last five, we will start seeing greater social friction. After all, people aren't looking at how they're doing, but rather at how their neighbors are doing and at their own place in society. These huge inequalities are not a particularly desirable characteristic in our society.

SPIEGEL: Are Western corporate CEOs driven by globalization, or do they themselves use the situation to their advantage?

Rogoff: We react to market forces and we try to protect jobs -- that's the image many managers have of themselves. They have no idea why people are so furious with them. Look at corporate takeovers where outgoing CEOs get a $50 million settlements and 5,000 workers are let go. That kind of thing happens all the time. On the one hand, it shows that we have a flexible economic system and we permit change. On the other hand, it's completely naïve to think that this doesn't create tensions.

SPIEGEL: But don't companies and countries that oppose globalization end up hurting themselves?

Rogoff: There are no easy answers. Of course it would be suicidal to nationalize our industries, for example. But those who say the economy is growing and everything's just great are simply unwilling to acknowledge these cracks in the system. Incidentally, this gap is much bigger in China. It's the 21st century along the coastline, but if you travel to the interior, where two-thirds of all Chinese live, you'll experience the 18th century. These are incomprehensible inequities. They have an extremely raw form of capitalism.

SPIEGEL: According to the 19th century English economist David Ricardo, free trade is good for everyone. According to his theory, the wealthy industrialized nations would simply have to concentrate on becoming even more technologically advanced to make up for their outsourcing losses in certain industries.

Rogoff: Ricardo was never right. Sure, there are more winners than losers, and winners profit to a greater extent than the losers suffer. But the assertion that everyone benefits simultaneously from free trade is simply incorrect.

Rogoff:  is not a solution. We can't turn back the clock. But unbridled capitalism will lead to some very real problems. We will see that ever-increasing deregulation can lose political support among the population in the long term.

SPIEGEL: If entire industries are shifted to the Far East, how can new jobs be created in the West?

Rogoff: Our high-tech industries are raking in tremendous profits, but for 50-year-old steelworkers or people in the aviation industries, it's difficult or impossible to improve their situations. The problem -- at least in the United States -- is not that people can't find jobs. The problem is that they're no longer finding jobs that provide them with dignity and decent social status. This tremendous downward pull for unskilled laborers has been around for a long time. But now outsourcing is also beginning to affect people in mid-level and higher-level jobs -- those who had felt secure in their positions.

Kenneth Rogoff says the split between the rich and the poor could lead to social unrest.

SPIEGEL: Are you saying that not even a first-class education can protect against competition from the Chinese?

Rogoff: You know, I was a chess pro in my younger days. Back then, the best player in New York could earn a pretty good living. But now the Indians and Chinese have become brilliant chess professionals. They get on a plane and play all over the world. This has led to dramatic pressure on incomes. Nowadays, the best chess player in Argentina can no longer make a living playing chess.

Rogoff: Even if your economy grows a little this year, the trend is pointing downward. You need reforms in the labor market, in the tax system, in the area of corporate governance and in the education sector. Your school system is very good compared with the US, but your universities are not competitive.

SPIEGEL: You've already written off one of the world's biggest economies?

Rogoff: Please don't misunderstand me. If Berlin would finally enact some decisive reforms, it could surpass the United States in growth for 20 years. Germany has such incredible wealth --with its culture, its education and its highly qualified population. It would just have to flex its muscles a little to achieve growth rates of four to five percent in the coming years and turn itself into an economic miracle, as it did in the 50s and 60s. But that won't happen as long as you have this political paralysis.