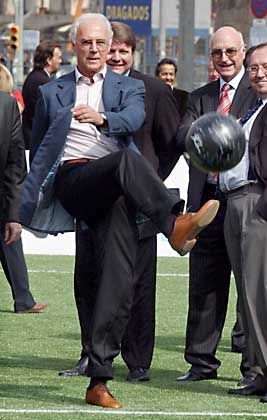 Beckenbauer displaying his football skills at a football show in Barcelona in April.

SPIEGEL: When you sit in your VIP seat in Munich on June 9 it will be the 6th time you're participating in a World Cup. Three times as player, twice as national team coach and now as head of the organizing committee. Which World Cup is the most important to you personally?

Beckenbauer: The current one. As soon as Sepp Blatter opened the envelope and announced: "The winner is Deutschland," I said it's a gift from heaven. There were times when I thought: What have we got ourselves into? But of course this World Cup offers the unique chance to improve the country, its infrastructure and above all its image in the world. We want to be good hosts.

SPIEGEL: In the 1990s you predicted that the national team's significance would wane. Were you wrong?

Beckenbauer: I was wrong. At the time I asked myself: Who wants to watch Germany play San Marino? We'll actually have to play them in the upcoming European Championship qualification. But no, people flock to such games as well, even though you don't get to see a match between equal sides. It seems national sentiment has become stronger, the sense of "We."

SPIEGEL: When you first joined the team in 1965, did you have to take a back seat role?

Beckenbauer: I enjoyed taking a back seat role. I was able to play with complete freedom, could lean on players like (Uwe) Seeler, Willi Schulz, Karl-Heinz Schnellinger. Those were real guys, they were successful. These days who can a young player lean on? He'll fall over!

SPIEGEL: So a newcomer like David Odonkor has a harder time these days?

Beckenbauer: Not necessarily. The young players of today aged 19 are more experienced, because they've played in far more international games, and are used to dealing with the media every day. By comparison with them we were children, naive and ingenuous.

SPIEGEL: When you missed the World Cup in 1978 because of your move to Cosmos New York, you were already starting to wane as a media star. Had you broken off ties with Germany or Germany with you?

Beckenbauer: The DFB (German Football Association) had decided that anyone playing abroad wouldn't be picked for the national team. Then there were two defeats in test matches so Helmut Schön (then national team coach) rang me in Los Angeles at half past four in the morning. He asked if there were a chance to get me back. But no high-ranking official at DFB rang up to ask Cosmos to release me. They sent the secretary general of the American soccer association who of course didn't make it past the doorman. So I said: No, you've shown that you're not really interested in my participation.

SPIEGEL: Six years later you were asked again. This time to take over the ailing national team. Were you well prepared for the Mexico World Cup in 1986?

Beckenbauer: I lacked experience. Fool that I was, I took care of every little thing, like dripping taps. Added to that there was the mistake of letting the press into the team quarters. We had a demarcation line in the hotel but it didnt work. It was a daily battle against the media, a battle you can't win.

SPIEGEL: Weren't you also frustrated that the team didn't meet your requirements?

Beckenbauer: No. I had brought along players who had been injured for a long time, Rudi Völler, Karl-Heinz Rummenigge, Pierre Littbarski too. I though I could get them fit. But it didn't happen.

SPIEGEL: Where you nevertheless proud that you got into the final with this injury-plagued team?

Beckenbauer: It was a huge achievement. 1990 was child's play by comparison.

SPIEGEL: Berti Vogts, your assistant at the time, said in 1990: Franz has only been a proper coach for the past two years. In what way had you changed?

Beckenbauer: I had learned a lot. In 1990 I only focused on the essential, the team. But the decisive thing of course was that a good team had grown. A perfect mixture of experience and youth, with guys who could sprint and guys who had stamina. It was a unit.

SPIEGEL: Was it the best German team of all time?

Beckenbauer: The 1974 team was good, almost identical with the team that won the 1972 European Championship. We took a long time in 1974 to find our feet. The 1990 team is on a par with the one of 1974. There was scarcely a difference in performance among the first 15, 16 players.

SPIEGEL: After the triumph in the final against Argentina you declared that a German era had begun.

Beckenbauer: I'll never forget that press conference. Someone in broken German asked me: "Germany west is now World Champion, Herr Beckenbauer, what will happen when you get players from the east as well?" I had to laugh and said: "We'll probably be unbeatable for years." Berti Vogts (who took over from Beckenbauer) said thanks a lot. But that was in the heat of the moment. Winning the World Cup can make you say things without thinking.

SPIEGEL: Germany erupted into national joy. Were you aware of the national importance of winning the World Cup?

Beckenbauer: The fall of the Wall was the background. A few months later we celebrated unification. The national flag had suddenly become more important again, attained a significance it hadn't had before.

SPIEGEL: Seven years later you embarked on the next mission of national significance -- as head of the team bidding for the 2006 World Cup. What's it like to be received everywhere like a statesman?

Beckenbauer: We were ambassadors, we didn't just want to represent football, but our country as well. That was quite well received. There were some cases of mistaken identity, in Prague I wrongly addressed someone as the interior minister. But that wasn't a major problem.

SPIEGEL: What did you learn from your travels?

Beckenbauer: That football has an incredible power that goes well beyond sport. Especially in Africa. In countries where people wage war against each other because some of them come from the north and others from the south, a tribe here, a tribal chieftain there. But football brings them all to the same table, football makes them peaceful, it can instil order and a sense of community.

SPIEGEL: What are you going to do on July 10, the day after the final?

SPIEGEL: Do you want to succeed (FIFA President) Sepp Blatter?

SPIEGEL: Whenever you announce that you're going to start taking it easy it turns out to be an empty promise.

Beckenbauer: I've been working for the World Cup for nine years now. Of course I'm looking forward to great football in great stadiums in a hopefully great atmosphere. But then I'll be happy once it's over, when I've got my peace and quiet.

SPIEGEL: Could you bear not being asked any more?

Beckenbauer: Look, I've got five children. I had the first three from age 23. I didn't see them grow up, I was focused on football. I totally neglected my duties as a father. Now I've been given the gift of two more children. If I neglect them I'll have done everything wrong.