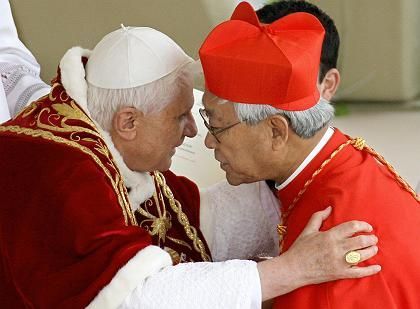 SPIEGEL: Cardinal Zen, the negotiations between the Vatican and Beijing on establishing diplomatic relations are in a state of crisis. Is there still a chance that the Church and the Communist Party can get together?

Zen: The Chinese side has put forward two conditions. It should not be too difficult to meet them: The Vatican already agreed to switch diplomatic recognition from Taiwan to Beijing. However, Beijing also insists on ordaining Catholic bishops itself. This is unacceptable for us. But the chairman of the State Administration of Religious Affairs, Ye Xiaowen, has proclaimed a willingness to negotiate on this issue. So this problem should not be impossible to overcome. Unfortunately a short while ago new developments took place which, in our view, are totally illegitimate.

SPIEGEL: The ordination of three bishops without the consent of the Vatican.

Zen: I hope the initiative for that did not come from the top echelons, but only from lower ranked offices like the Patriotic Association ...

SPIEGEL: ... the name of the party-controlled Catholic Church of China?

Zen: ... and the State Authority for Religious Affairs. I hope the top authority will stop that. Otherwise negotiations would not make sense any more.

SPIEGEL: The Vatican has denounced the ordination of the two bishops in an unusually clear and sharp manner. But hasn't China always ordained bishops without consulting with the Vatican in the past? Why such an angry reaction?

Zen: The Chinese side tells so many lies. Let us get the facts straight. When China was isolated from the outside world, the government alone ordained the bishops. That was completely illegitimate. But the clergy knew that they were illegitimate and that it is the pope who must have the final say. When China opened up at the end of the 1970s and the beginning of the 1980s, they asked the Holy Father for forgiveness and asked, finally, for him to accept them. In most of the cases, the pope did that.

Zen: Later the candidates for bishop approached the pope before their ordination. They only accepted their promotion after receiving the green light from Rome. In 2000, for example, of 12 candidates only 5 accepted the position, some of them without the permission of the Holy Father. Obviously they were under a lot of pressure. Those who accept the title of bishop without the consent of the pope will be isolated by the clergy and the faithful. In recent times, almost all bishop-elects were accepted by the Holy See.

Zen: It threatens punishment for all those who talk openly about their relationship with the Vatican. New bishops are not allowed to read their ordination documents from Rome during the service -- they can only read the letter of appointment from the state's so-called Bishops' Conference.

SPIEGEL: What was different in the recent cases?

Zen: One candidate was asked by the Holy See to wait because the examination was not completed. The other one was refused by the pope earlier in February. At that time, he cancelled his ordination. We do not know why he suddenly accepted the title. Obviously he must have been under a lot of pressure.

Zen: Some critics say the Vatican is naive. But I believe we should not be blamed for our optimistic view that even a communist party can become reasonable. Normalization would not only make sense for the Vatican -- which could then directly take care of millions of faithful, but also for the government. China would become more harmonious. The Catholics could contribute to society, for example, by doing social work. Now we are only allowed to pray in the church. What a waste! On top of that, Beijing would gain enormous international praise.

SPIEGEL: But isnt the Communist Party correct in its fear of the Catholic Church? Take the case of Poland. There the clergy contributed to a great extent to the fall of the communist regime.

Zen: It is ridiculous to compare China with Poland. Poland is 99 percent Catholic. In China we are a small minority. The Soviet army stood in Poland. But here we are all Chinese, there is no hatred.

Zen: They are afraid of everything that they are not completely in control of.

SPIEGEL: Where do you see room for compromise between Rome and Beijing?

Zen: The bottom line is this: The final decision on ordination of a bishop belongs to the Holy See. But the government can offer an opinion. The Vatican presents names and listens to the opinion of the other side. There is room for negotiation.

SPIEGEL: If there were an agreement between the Vatican and the Communist Party, how would it change the everyday life of Chinese Catholics?

Zen: If there was real religious freedom, the government would give up power and influence over the daily life of the Church, and the Patriotic Association and the State Authority for Religious Affairs would become obsolete. But the Church still suffers from countless restrictions. Half of the seats on the leading boards of the seminaries are occupied by state officials. This type of situation is simply ridiculous. There is no other place in the world like it.

SPIEGEL: Has the repression been eased in the recent past?

Zen: Communication between the Vatican and the faithful has improved. The official Church and the underground Church are getting closer. Everybody knows that they share the same principle; everybody wants to follow the pope. The underground church is now even praying for the official priests to make them stronger to resist the government pressure.

SPIEGEL: There are still many priests in jail; bishops are under house arrest, because they insist on loyalty to the Vatican. Is their release a precondition for establishing relations?

Zen: Yes. How could it be otherwise? We know they are not criminals. They only disobeyed government's rules about religion because of their faith.

SPIEGEL: Is Pope Benedict XVI more interested in China than his predecessor?

Zen: Pope Benedict takes important issues into his own hands. China is important to him. He really cares personally.